Overview of Coxiellosis and Q Fever

Cause: Coxiella burnetii, an obligately intracellular gram-negative bacteria that belongs to the Family Coxiellaceae

Affected Hosts: Humans are most susceptible; reproductive disease can occur in farm animal species such as sheep, goats, cattle, and horses, as well as cats and dogs

Geographic Distribution: Worldwide, with the exception of New Zealand

Human Health Significance: Q fever in people results primarily from contact with infected sheep, goats, and cattle, or indirect contact with surfaces contaminated with secretions or excretions of these animals. However, contact with infected companion animals can also lead to transmission. Q fever in people is most commonly an acute febrile illness, but pneumonia and chronic complications such as endocarditis, granulomatous hepatitis, and chronic fatigue can occur.

Coxiella burnetii is a gram-negative, obligately intracellular, small, pleomorphic rod that causes Q fever in humans, a significant zoonosis worldwide. Sheep, cattle, and goats are the most commonly reported reservoirs for the organism, but infected cats and less commonly dogs have also been implicated in transmission to people.2-5 Animals other than humans are often subclinically infected, although reproductive complications such as premature birth, abortion, and stillbirth may also occur. Reservoir hosts shed organisms in urine, feces, saliva, and/or milk, and especially in vaginal secretions and the products of parturition because of recrudescence of infection during pregnancy. The placentas of infected animals are heavily infected (up to 109 organisms per gram of tissue). At parturition, aerosols are created, which are subsequently inhaled by other animals and humans (Figure 32-1). Ingestion of unpasteurized contaminated milk is a less common and more controversial mode of transmission.6,7 The term Q fever stands for query fever, the name it was given when it first emerged in Queensland, Australia, and the underlying cause had not yet been identified. In humans, acute Q fever is characterized by a febrile “flulike” illness, with headaches, and sometimes pulmonary and hepatic involvement. However, infection is initially asymptomatic in 60% of those infected.8 Chronic Q fever can follow acute Q fever or asymptomatic infection and can be characterized by cardiac disease (endocarditis, pericarditis, myocarditis), fatigue syndromes, skin rash, and neurologic, pulmonary, and hepatic disease. In avian species, systemic illness has been associated with infection by other Coxiella-like organisms.9–11 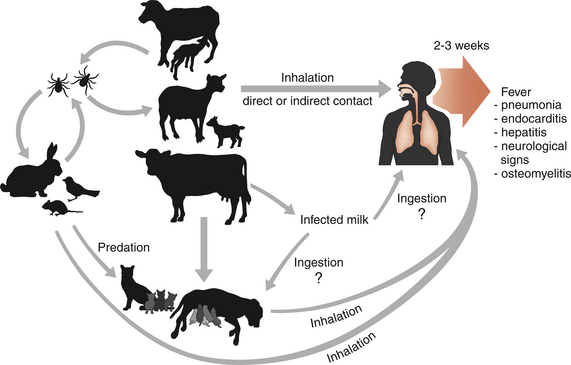 FIGURE 32-1 Transmission of Coxiella burnetii. The organism is most often transmitted to humans when animals give birth. People become infected by inhalation when they directly contact the products of parturition or as a result of indirect contact with organisms that survive in the environment. Sheep, cattle, and goats are the most common reservoirs of the organism for human infection, but infected cats and less commonly dogs can also transmit the infection to humans. Ticks also harbor the organism and are thought to maintain transmission to wildlife species, especially rodents (such as small mice) and rabbits, but also birds. Dogs and cats and humans can also become infected when they contact (or ingest) wildlife species. Ingestion of infected milk may be a lesser mode of transmission.

Unlike other obligate intracellular pathogens, C. burnetii survives prolonged periods in the environment, where it resists high temperature, a variety of disinfectants, and ultraviolet light. The organism exists in two forms: a small cell variant, which survives in the environment, and a large cell variant, which replicates within cells. Survival of the organism for up to 10 months on wool at 15°C to 20°C (59°F to 68°F) has been reported, and it can also survive in tissues that have been stored in formalin for several months. It is inactivated by 5% hydrogen peroxide.12 Although originally classified within the order Rickettsiales, the availability of sequence information led to its reclassification as a gammaproteobacterium in the order Legionellales, which also includes Legionella species. C. burnetii undergoes phase variation, which is associated with alterations in its cell wall components. The variants have nominally been called phase 1 and phase 2.13 The changes in cell surface antigens and the creation of phase variants has clinical implications for serologic testing due to the production of phase 1 and phase 2 antibodies to the bacterium at different stages of natural infection (see Diagnosis, later). The whole genome of C. burnetii has been sequenced.14

C. burnetii is extremely contagious, and only small numbers of organisms are required to cause disease in people. The epidemiology of Q fever varies geographically. Because of its predilection for domestic ruminant species, Q fever is most commonly reported from rural areas. C. burnetii has been detected within a huge variety of different tick and other arthropod species. Within ticks, it replicates in the midgut and it is shed in large quantities in tick feces. Although ticks have the potential to transmit the organism to domestic animal species, the most significant role of ticks appears to be in transmission to wildlife.15 C. burnetii has been identified in fish, wild birds, rodents, marsupials, horses, swine, camels, marine mammals, ducks, turkeys, geese, cats, dogs, and rabbits. Although the mechanism is not clearly defined, cats and dogs may become infected through exposure to infected sheep, cattle, and goats—possibly through ingestion of unpasteurized milk from these species—and through contact with, or predation of, infected wildlife reservoir hosts such as rodents, birds, and rabbits.

Exposure to stillborn kittens or apparently healthy newborn kittens has been a risk factor for human infection in Africa, Japan, Korea, Canada, and the United States. In a study of intact female cats from Colorado, C. burnetii DNA was not detected in vaginal swab specimens or uterine biopsies from 50 shelter cats using a PCR assay, but 4 of 47 uterine biopsies from client-owned cats were positive.16 Seroprevalence studies suggest that infection is more common in stray cats and dogs than client-owned animals, but further research is required to determine risk factors for exposure in dogs and cats.17,18 No association has been found between prevalence of Q fever in people and cat or dog ownership.19 Laboratory-acquired infections have been described in people, and infection can occur as a result of exposure to straw, manure, or dust, such as that from contaminated farm vehicles and contaminated clothing. Q fever has emerged as a disease of U.S. combat arms military personnel who are deployed to Iraq.20 Studies of a large, 2-year outbreak in the Netherlands showed that dust-accumulating surfaces contained higher levels of C. burnetii DNA than vaginal swabs from sheep and goats.21 The organism can travel for miles as a result of windborne transmission.

After inhalation (and to a lesser extent, ingestion), C. burnetii enters mononuclear phagocytes and survives within the harsh environment of the phagolysosome.22 Remarkably, the acid conditions of the lysosome appear to be a requirement for the metabolic functions of C. burnetii. Replication is prolonged, and minimal cytopathic effects occur in infected cells. The organism appears to modulate apoptosis in order to inhibit cell death and promote its own replication.23 Subsequently, infected cells enter the bloodstream. After experimental infection, bacteremia may be prolonged (up to 1 month) in cats.24 The organism can persist in a variety of tissues, and in human patients, this contributes to chronic disease manifestations, such as prolonged fever, endocarditis, vasculitis, chronic fatigue, and immune-mediated consequences such as demyelinating polyradiculoneuritis.25 Appropriate diagnosis and treatment at the acute stage of clinical illness is important in reducing the risk of postacute Q-fever sequelae and development of chronic disease. Reactivation of shedding has been described during pregnancy in humans.12 Infected cats and dogs usually show no clinical signs of infection, but stillbirth, abortion, and prolonged vaginal bleeding for 3 weeks before delivery have been reported in cats.4,26 The organism replicates in trophoblasts, and in experimentally infected goats, massive bacterial replication occurs in the placenta just before abortion.27 An infected rabbit hound dog that transmitted C. burnetii to a family in Nova Scotia gave birth to four puppies, all of which died within 24 hours of birth.5 The importance of C. burnetii in reproductive tract disease and chronic disease manifestations such as endocarditis in cats and dogs requires further investigation.

Diagnostic assays available for Q fever are listed in Table 32-1.

C. burnetii can be isolated in a variety of different cell lines. It has also been isolated in a cell-free medium that mimics the phagolysosome environment.28 Because it is highly infectious to humans, most laboratories do not have the special facilities required to isolate C. burnetii. Thus diagnosis of infection is usually performed using immunohistochemistry, serology, or PCR.