Cooling and Cryopreservation of Equine Embryos

Development of Methods to Cool Embryos

The potential to store equine embryos was first demonstrated in 1982, when Yamamoto1 cooled equine embryos to 0° or 20°C for minutes to hours and produced foals from embryos stored at either temperature. The research used as a basis for commercial transport of embryos was reported in 1987.2 In the study, embryos were stored in a tissue culture medium (Ham’s F-10 with 10% fetal calf serum) that was gassed with 5% CO2, 5% O2, and 90% N2 or buffered with HEPES. The gassed medium was determined to be preferential to medium with HEPES for storage of embryos for 24 hours. At 14 days, pregnancy rates were similar for control embryos, which were transferred immediately after collection, and embryos stored in the gassed medium; however, by 35 days, pregnancy rates were significantly higher for control than stored embryos (80% and 55%, respectively). The researchers concluded that storage procedures were acceptable for embryo transport. This system was modified to provide a commercial shipping regimen, and pregnancy rates at 12, 35, and 50 days were not different for embryos that were cooled and shipped versus transferred directly into recipients at the location of embryo collection.3 However, pregnancy losses tended to be higher when embryos were transported for more versus less than 12 hours.3

Because methods for the short-term storage of equine embryos were developed primarily to allow embryo transport between collection and transfer facilities, embryos had to remain viable for at least 12 hours in the storage system. Storage at reduced temperatures retarded embryo metabolism and growth. During an interval of 12 hours, embryos increased in diameter 1.5%, 9.3%, and 37% at 5°, 24°, or 37°C, respectively.4 After storage for 24 hours at 5°C, the mean embryo diameter increased by only 35 μm over 24 hours, for embryos with a mean diameter of 490 ± 43 μm at the onset of storage; the embryos did not advance in developmental stage.2 The success of storage at reduced temperatures does not appear to be strictly dependent on embryo size,5 although researchers have suggested that smaller embryos may be more susceptible to deleterious effects of cooling.2,4,6,7

Different methods have been used to package embryos for storage or transport. However, in most systems, the embryo is immediately identified, washed, and packaged in a holding medium within a secure container. The packaging system needs to maintain an appropriate temperature for the duration of storage. Packaging systems for transporting cooled semen have been used for embryo transport. These systems vary in their ability to maintain temperatures over time and to protect against heat and cold. Therefore, prior to use, the packaging system should be investigated. One of the most commonly used systems is the Equitainer (Hamilton Research, Inc., South Hamilton, MA). In a previous study,2 the medium within an Equitainer initially decreased in temperature 0.3°C/min to 10°C at 5 hours; the temperature was maintained at 5°–10°C between 5 and 24 hours.

The medium for embryo storage must maintain a constant pH and sustain embryo viability. A protein source and antibiotic are usually added or supplied with the medium. Published data are available for Ham’s F-10 medium, gassed (5% CO2, 5% O2, and 90% N2) or with HEPES.2 Other media, containing zwitterionic buffers to maintain pH, are currently available; these media were initially designed for washing and holding embryos prior to transfer. Similar pregnancy rates were reported for embryos stored in gassed Ham’s F-10 medium (Sigma Chemical, St Louis, MO) and an embryo-holding medium (EmCare Holding Solution, ICP, Auckland, NZ).6,8 The two media were compared in vitro to another medium (ViGro Holding Plus, Bioniche, Athens, GA)6,9; although the percentage of dead cells per embryo increased with storage time, no differences were observed among media.9 These media are currently being used in clinical programs to transport embryos.

When collecting equine embryos for cooling and transport, media and materials needed for the procedure should be organized before collecting the embryo (Fig. 17-1, A). Ideally, the interval of time that the embryo is kept in a holding medium before being cooled should be limited. Although holding media are designed to accommodate the embryo, any artificial environment has the potential to cause deleterious effects. When embryos are cooled, the reduced temperature lowers embryo metabolism and helps to protect the embryo from a suboptimal environment. Therefore, the embryos should be collected, washed, and packaged for cooling in the shortest possible interval. 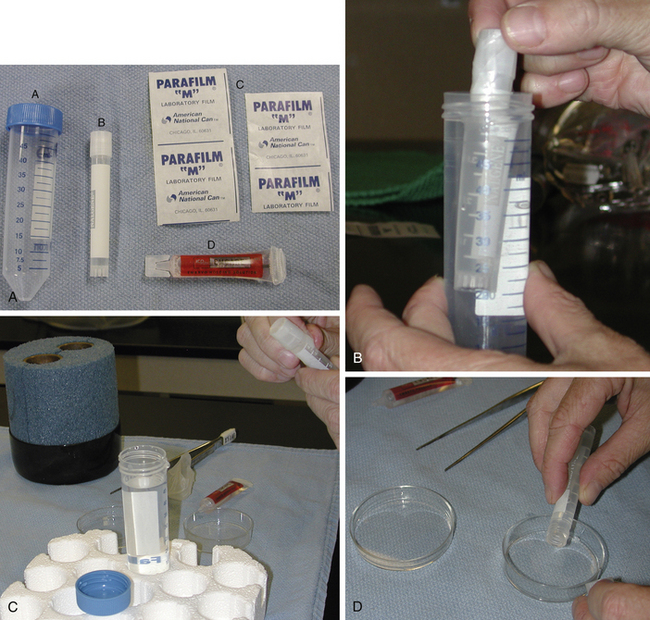 Figure 17-1 A, Supplies for packaging the embryo include a 50-ml conical tube (A), a 5-ml cryovial (B), parafilm (C) to place around the tubes’ lids, and embryo-holding medium (D). B, The embryo is packaged within the small tube. The large tube is filled with embryo flush medium, and the small tube is being placed within the large tube. C, To unpack the embryo, the small tube is removed with a pair of forceps, and the parafilm is unwrapped from around the cap. D, The holding medium and embryo are gently poured from the small vial into a tissue culture plate.

For packaging embryos, an Equitainer or other appropriate packaging can be used. The container is typically held at room temperature before packing. Coolant cans or packs should be prepared as instructed.

Upon collection, the embryo is washed through three to six drops of medium to remove debris. The medium should be at a consistent temperature (room to body temperature) for washing, holding, and packaging the embryo; major temperature fluctuations should be avoided. A cryovial or snap-cap tube, usually containing 4–6 ml of medium, can be used to hold the embryo during transport. Prior to loading the embryo, medium is used to fill the vial or tube about three-quarters full with medium. The embryo is pulled into a pipette or 0.25-ml straw for transfer into the tube. If a straw is used to transfer the embryo, the end of the straw containing the cotton plug can be attached to a ureteral catheter connector (Cook Urological, Spencer, IN) and a 1-ml syringe. The open end of the straw should not be handled to minimize bacterial contamination of the transport medium. The embryo is pulled into the straw, being careful to avoid getting fluid into the cotton end of the plug, which will seal the straw. To transfer the embryo, the end of the straw is inserted into the holding medium within the tube. The author likes to do this while holding the tube of medium against a light source (overhead or microscope light) and placing the straw 1–2 cm into the medium. In this way, the embryo can be seen as it exits the straw. The embryo should not be released near air bubbles, and air bubbles should not be pushed from the straw during the transfer, since the embryo can adhere to air bubbles and float to the top of the tube. After being placed into the medium, the embryo should begin to sink toward the bottom of the tube. The tube can then be completely filled with medium. Properly filling the tube is important. Air in the tube can allow agitation of media and formation of air bubbles during transport; however, if the tube is too full, the medium can overflow as the cap is closed. After being secured on the tube or vial, a strip of parafilm is placed around the cap. A 50-ml, conical tube is used as a second container. The 50-ml tube is filled with embryo-collection medium at the same temperature as the holding medium. The vial containing the embryo is then placed within the 50-ml tube, and the lid is placed upon the larger tube (Fig. 17-1, B). The 50-ml tube helps to protect the smaller tube and would contain the embryo if the smaller tube breaks or loses its cap. The large tube also provides additional temperature and shock insulation for the embryo. Parafilm is placed around the cap of the large tube. Although the embryo should not be exposed to the medium in the large tube, the medium should not be contaminated. Therefore, the tubes should be handled minimally and kept as clean as possible. Identification information for the embryo should be printed clearly on the large tube. Paperwork should be included, containing contact information and a description of the embryo (stage and quality). This will allow personnel at the receiving facility to determine if the embryo has changed in quality during transport. Also, if the clinician is not certain if the structure is an embryo vs. debris or an unfertilized oocyte, this should be noted. After packaging of the embryo, the large tube can then be placed directly into a tube holder if one is present within the cooling container. If not, ballast bags or insulation material can be placed around the tube before packaging within the container. Embryos have been shipped as cargo on airplanes or on overnight carriers. The receiving facility should be contacted since they may have specific packaging and shipping instructions, and they will need tracking information for the package on the day of shipment. Insuring the package during transport should be discussed with the owner of the donor mare, in case of failure or delay in delivery.

Removal of the Embryo

To unpack the embryo, the smaller tube is grasped with a pair of forceps and removed from the 50-ml tube (see Fig. 17-1, C). The large tube and its contents are kept intact until the embryo is identified. If the embryo is not found within the smaller vial, the medium within the large tube can be searched. To remove the embryo, the outside of the small tube is wiped dry, and the parafilm is removed. The vial is gently tilted back and forth so the embryo will float from the bottom of the tube. Care is taken to avoid the formation of bubbles that can make finding the embryo more difficult. The contents of the small tube are gently poured into a tissue culture dish (see Fig. 17-1, D