Congenital and Hereditary Conditions of Camelids

The appearance of a congenital defect in any wild animal is cause for concern to keepers, zoo managers, and zoo veterinarians. Historically, congenital defects have been reported ever since animals were first maintained in captivity. Inbreeding is a constant hazard that may contribute significantly to increasing homozygosity in a small population of animals. The development of species survival plans (SSPs) in the past decade has made it possible to evaluate and scientifically share genetic lines to minimize the effects of inbreeding and linebreeding. However, challenges still exist.

Camelidae (camels, llamas, alpacas, guanacos, and vicu-as) were kept primarily as zoo animals in the United States until the 1970s, when the public became enamored of these animals and started to breed them privately as an alternative livestock enterprise. This chapter discusses the congenital/hereditary conditions of the camelidae.

Solving congenital defect problems begins with recognizing that many causes exist for congenital defects and are not necessarily hereditary (Box 48-1). Many factors may influence the well-being of the fetus, and numerous agents other than genetic factors may disrupt organogenesis.

Hereditary condition Disorder genetically transmitted from parent to offspring. The manifestation of the condition may be present at birth or may develop subsequently.

Genetic disorder The term genetic is frequently used interchangeably with hereditary, but these are not synonymous. Certain genetic disorders may cause serious defects in a single individual, but the disorder will not be passed on to subsequent generations. However, reproduction may be impossible because of the nature of the defects.

Teratology The science of teratology (Greek teras, “monster”) deals with overall birth defects. A teratogen is any agent that causes abnormal development of the fetus. The furor over inadequate testing of drugs that may be prescribed for pregnant women was spawned by the thalidomide disaster of the 1970s. Both physical and chemical effects on the fetus were known before that time, but now an entire discipline of medicine and biology deals with such topics.

Teratogenesis Process by which teratogens exert their effect.

Genotype Genetic constitution of an individual at one or more loci.

Phenotype Observable trait of an individual.

Linebreeding When an ancestor appears multiple times in a pedigree; typically used to foster a desirable trait from a superior ancestor.

Camelid All species of the camelidae.

All camelids have a diploid chromosome number of 74. There are three pairs of submetacentric autosomes and 33 pairs of acrocentric autosomal chromosomes in camelids. The X chromosome is the largest submetacentric chromosome, and the Y chromosome is a very small acrocentric chromosome. Some confusion over the classification of camelid chromosomes has arisen among investigators, perhaps because of variations in staining procedures and evaluation at different phases of meiosis.6 Chromosome banding patterns and nucleolus organizer regions have also been identified, but a complete discussion of karyology is beyond the scope of this chapter. Fertile hybrids have been produced among all four species of SACs.

The causes of congenital and hereditary defects are manifold (see Box 48-1). Although no specific congenital defects caused by infectious agents have been reported in camelids, it seems likely that these may occur.

A number of viral infections are also teratogenic in humans, cattle, sheep, goats, swine, cats, and ferrets. The ultimate effects on the fetus are determined by the species involved, the strain of the virus, and the stage of pregnancy at the time of exposure to the teratogen.

Bluetongue virus (BTV) has been shown experimentally to cause central nervous system (CNS) defects (hydrocephalus, cerebral hypoplasia, dysplastic spinal cord), retinal dysplasia, and arthrogryposis in lambs. Exposure of pregnant heifers to BTV resulted in abortion, arthrogryposis, prognathia, and a “dummy-calf” syndrome.40 It is important to note that modified live virus (MLV) BTV vaccines may also exert teratogenic effects on the fetus of the pregnant ewe. The use of any MLV vaccine in any species other than those for which the vaccine was prepared is hazardous.

Both hog cholera virus and swine influenza virus are teratogenic. Feline panleukopenia virus (FPLV) causes cerebellar hypoplasia in kittens and ferrets.40 Interestingly, mature ferrets are refractory to overt infection with FPLV, yet teratogenesis occurs. In humans, examples of teratogenesis include congenital syphilitic blindness and congenital deafness from prenatal infection with German measles virus. 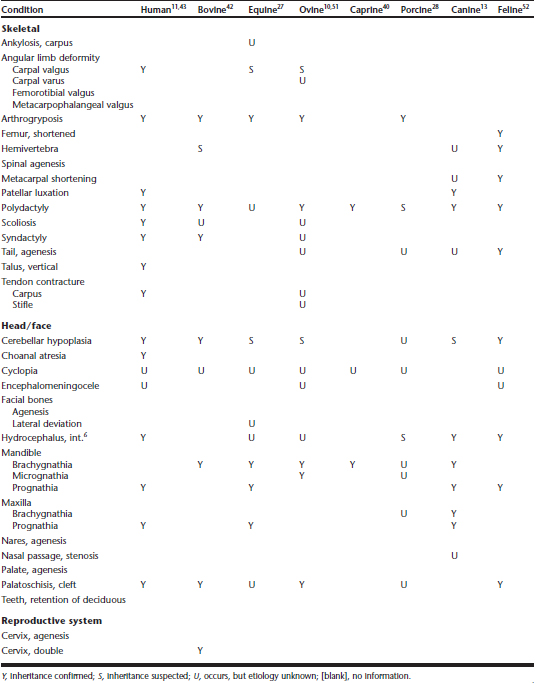 The following general principles should be understood:

1. The degree of susceptibility to the effects of a teratogen is determined by the genotype of the animal. Not all species are equally affected.
2. To affect the fetus, the teratogen must pass through the placenta in the metabolically active form.
3. The nature of the deformity is dose dependent. High doses of a certain teratogen at a critical time result in resorption. Slightly lower levels result in dead, deformed fetuses; still lower levels in living, deformed fetuses; and at the lowest levels, in normal, live offspring.
4. The fetus must be exposed to the teratogen at a specific period during gestation. Knowledge of embryology, especially the time and sequence of organogenesis, is fundamental to understanding teratogenesis.
5. Chemically dissimilar teratogens may produce identical effects on the fetus.

1. Causal agent is frequently species specific.
2. Organ affected may be specific.
3. Toxin must pass through the placenta.
4. The effect is dose dependent.
5. Time of exposure during gestation is critical.
6. Multiple toxins may produce the same defect.

Poisonous plant ingestion by a pregnant SAC is an ever-present hazard to the fetus.31,32 SACs are fastidious in their eating habits, rarely consuming large amounts of strange plants, but they do investigate and try new plants. A low-dose intake may be a saving factor in camelids. Table 48-2 lists plants known to produce teratogenic defects in livestock.

Table 48-2 Plants Known to Be Teratogenic

Perhaps of even greater importance are the potential effects of chemical agents on the reproductive process without obvious outward expression. Teratogens may have a direct effect on ova or spermatozoa, causing infertility. High doses early in gestation may cause fetal death with resorption or undetected abortion. Lethal effects may be the result of maternal ingestion early in gestation, even though fetal death occurs late in gestation or postpartum. Nonlethal effects may either prevent reproduction or allow reproduction of constitutionally unsound individuals that may be highly susceptible to other diseases.

Hundreds of anatomic and physiologic traits are passed from parents to offspring by gene pairing.38,44 Genome research and gene mapping have progressed at astronomical rates, but to my knowledge, a gene map of a camelid has not been produced.

Fiber coat color inheritance in llamas and alpacas has received attention by both South American22 and North American24,33,34,41 investigators, but definitive genetic studies in camelids have not been conducted and reported.

Body conformation is inherited, but not in a typical mendelian fashion with simple dominant and recessive genes. Numerous genes may influence conformation positively or negatively. Environment and nutrition are also factors.

A number of chromosomal abnormalities have been reported in domestic animals, but not in camelids. These defects occur during meiosis and include fusion of chromosomes, translocations of segments of chromosomes, loss of a segment, and other changes.26 The expression of the defect is determined by whether or not the change occurred on an autosomal pair or one of the sex chromosomes. Chromosomal aberrations may affect a single individual or may be perpetuated as inherited characteristics. Chromosomal aberrations may be identified by a combination of family pedigree analysis, identification of interspecific somatic cell hybrids, and cytogenetic studies, including karyotyping and various banding staining.

Genetic studies have been developed to the stage of highly technical submolecular, biochemical, and deoxyribonucleic acid (DNA) complexities. Camelid inheritance is still in the descriptive stage. Although most of the congenital defects reported in camelids are known to be inherited in one or more species of other domestic animals or humans, it is important to recognize that many may also be produced by other etiologic agents (see Box 48-1). In fact, such defects as arthrogryposis are more likely to be caused by exposure of the dam to a toxic substance at a crucial time during gestation than by genetic damage.

Circumstantial evidence that a congenital trait may be hereditary is based on evidence as follows6,46:

1. That the trait is known to be inherited in two or more other species.
2. That the trait appears multiple times in a pedigree chart; this may require statistical analysis.
3. That the trait appears with greater frequency in a species, breed, or population.
4. The use of breeding trials. This has been used successfully in cattle when trying to prove the freedom of a carrier genetic trait of a bull used in an artificial insemination stud.
5. Laboratory analysis for certain biochemical anomalies.

The detection of an inherited trait depends on the mode of inheritance. If a characteristic is dominant, one of the parents will be phenotypically positive and, generally, at least 50% of its offspring will express the phenotype. However, even though a characteristic may be dominant, environmental or genetic factors may affect the degree of expression of a phenotype.

The majority of inherited defects are recessive, and both parents must contribute the gene in order for the offspring to exhibit the trait. Recessive traits may be simple, in which only one gene is involved, or multifactorial, which complicates expression and detection in a population.

The diagnosis of an inherited trait is a laborious, costly, time-consuming process. Familial repetition is the most important data necessary, and this requires detailed genealogy of both normal and abnormal offspring. The ultimate evaluation is based on breeding trials. Only one major camelid breeding trial is currently under way, to establish the etiology of choanal atresia in llamas and alpacas.