Overview of Chlamydial Infections in Dogs and Cats

Causes: Chlamydia felis (and possibly other chlamydiae such as Chlamydia pneumoniae) causes ocular disease in cats; Chlamydia psittaci and Chlamydia abortus have rarely been detected in association with ocular and respiratory disease in dogs. These are obligately intracellular bacteria that belong to the family Chlamydiaceae.

Major Clinical Signs (Cats): Acute and chronic conjunctivitis, chemosis, serous to mucopurulent ocular discharge, and blepharospasm, with or without sneezing and nasal discharge

Human Health Significance: C. felis has rarely been documented as a cause of human conjunctivitis. The importance of cats and dogs as a source of other human chlamydial infections is unclear. C. psittaci is generally acquired from avian species and not dogs and cats.

Chlamydiae are obligately intracellular bacteria that belong to the order Chlamydiales. They primarily cause conjunctivitis in cats, but may also play a role in other systemic and reproductive disorders in dogs and cats that remain poorly characterized. Most knowledge of chlamydial infections results from research on human chlamydial pathogens such as Chlamydia trachomatis, Chlamydia pneumoniae, and Chlamydia psittaci, which have significant clinical and public health importance (see Public Health Significance). Chlamydiae structurally resemble gram-negative bacteria, lack peptidoglycan, and have extremely small genomes; they depend on the host cell for many amino acids and nucleotides. They exist in two forms, an infectious elementary body (EB), which is 0.2 to 0.6 µm in diameter and exists outside the cell, and the reticulate body (RB), which is larger (0.5 to 1.5 µm), is noninfectious, and replicates within the cytoplasm of host cells, before it matures and forms EBs (Figure 33-1). The EBs survive only a few days in the environment at room temperature and they are readily inactivated by most disinfectants. Transmission occurs via direct contact or, to a lesser extent, aerosols. Fomites are also likely to be an important means of transmission among group-housed cats in heavily contaminated environments. The chlamydiae at one time were separated into two genera, Chlamydia and Chlamydophila, based on sequence analysis of the 16S rRNA and 23S rRNA genes. However, there has been disagreement in the field regarding this classification, and reversion to the single genus Chlamydia has since been recommended based on the availability of complete genome sequence information.2 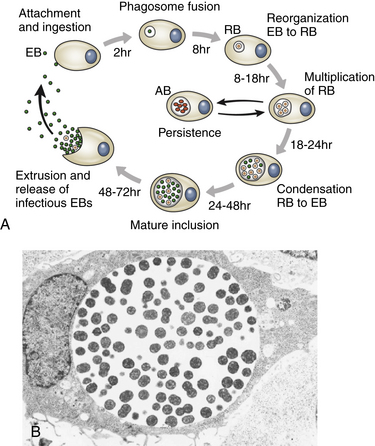 FIGURE 33-1 A, Life cycle of chlamydiae. From top left. Electron-dense elementary bodies (EBs) attach to and are taken up by epithelial cells. EBs then differentiate into reticulate bodies (RBs), and RBs divide by binary fission. RBs condense into EBs, and also have the potential to persist in the form of aberrant bodies (AB). EBs are released by cell lysis and infect other cells. B, Electron micrograph of chlamydial organisms growing in an inclusion in tissue culture. The larger reticulate bodies (RBs) have more diffuse chromatin. One of the RBs appears to be dividing. The smaller dense bodies are elementary bodies. (B from Mandell GL, Bennett JE, Dolin R. Principles and Practice of Infectious Diseases. Ed 7. Philadelphia, PA: Elsevier, 2012; 2:2440)

Chlamydiae persistently infect epithelial cells of the ocular, respiratory, gastrointestinal, and genitourinary systems; chlamydial infections of the synovium have also been reported in a number of different host species. Different chlamydial species tend to associate with certain host species, although evidence has accumulated that some chlamydial species can cause disease in more than one host species (Table 33-1). In addition, more than one chlamydial species can cause similar disease manifestations in a single host species. For example, although the human ocular disease trachoma is caused primarily by C. trachomatis, it has now also been associated with infection by C. pneumoniae and C. psittaci.3 Chlamydia felis is an important cause of conjunctivitis and possibly reproductive disease in cats, but DNA that resembles that of the human pathogen C. pneumoniae has now also been detected in ocular swabs from European cats with conjunctivitis.4 Chlamydia abortus DNA was detected in histopathology specimens from 1 of 13 cats with arteriosclerosis.5 There are rare reports of chlamydial infections in dogs, in association with ocular and respiratory disease, polyarthritis, and atherosclerosis.6–11 However, chlamydiae were not detected by PCR assay in atherosclerotic lesions from 16 dogs in one study, so the role of chlamydiae in this otherwise rare condition in dogs is uncertain.5 Respiratory disease associated with C. psittaci infection has been reported most frequently among dogs.

∗Infection may occasionally extend to other host species.

The most significant pathogen of cats is C. felis, which causes acute and chronic conjunctivitis in cats worldwide. The results of genetic analysis (by multilocus variable-number tandem-repeat and multilocus sequence typing) have revealed that as many as 25 different genotypes of C. felis exist, and more than one genotype may circulate in some catteries.12 Co-infections with more than one strain can occur. The prevalence of infection varies from one group of cats to another and with geographic location, age of the cat population sampled, and presence or absence of clinical illness. Infection occurs most often in multiple-cat households, especially breeding catteries. C. felis DNA is uncommonly detected in conjunctival swabs from healthy cats. For example, in clinically healthy household cats, those with a history of past conjunctivitis, and those with active conjunctivitis, 0%, 4.6%, and 7.3% had positive PCR assay results, respectively.13 Isolation rates of up to 30% in household cats with conjunctivitis have been reported.14 In shelter cats, the prevalence of C. felis infection has ranged from 0% to 15%.15–18 In cats from 218 European rescue shelters, breeding establishments, and private households, the prevalence of infection in cats without respiratory disease was 3%, versus 10% in those with evidence of respiratory disease.19 Infection with C. felis in this European study was associated with suboptimal hygiene. Infection with C. felis is more often present in young cats, especially those aged 2 to 12 months; kittens less than 2 months of age may be protected by maternal antibody, although neonatal infections have been described. Cats older than 5 years of age are very unlikely to be infected with C. felis. Co-infections with other respiratory pathogens, such as feline herpesvirus 1 (FHV-1) and feline calicivirus (FCV), are common.

The DNA of organisms that belong to the family Parachlamydiaceae has recently been detected in cats with ocular disease. These organisms resemble Chlamydia and reside symbiotically within amoebae. Parachlamydial species include Neochlamydia, Parachlamydia, Protochlamydia, Rhabdochlamydia, Criblamydia, Simkania, and Waddlia species. DNA that resembles that of Neochlamydia hartmanellae has been detected in feline conjunctival brush specimens.20 This organism is an endosymbiont of the amoeba Hartmannella vermiformis, which has been identified as a cause of ocular surface infection in people and may play some role in feline ocular infections. The DNA of Parachlamydia acanthamoebae has also been detected with PCR in cats with keratitis and conjunctivitis.21 As yet, co-infections with amoebae have not been detected in cats. Further studies are required to determine the prevalence and clinical significance of these organisms.

C. felis infection is acquired by cats primarily through close contact, fomites, or to a lesser extent, aerosol transmission. Kittens may be infected from the mother at birth. Whether venereal transmission occurs, as reported for other chlamydial species, is unknown, but in some infected cats, the organism is shed in vaginal discharges and from the rectum as well as in ocular discharges. After uptake of EBs, the EB transitions into the RB, which replicates by binary fission in a membrane-enclosed vacuole called an inclusion and avoids lysosomal fusion. The RBs then transition back to the EB form, which is released into the extracellular milieu after cell lysis occurs and subsequently infect other host cells. The entire replication cycle takes about 2 days to complete (see Figure 33-1).22

Chlamydiae primarily infect epithelial cells, but they can also infect a variety of other cell types including endothelial cells, smooth muscle cells, lymphocytes, monocytes, and macrophages. C. felis replicates in the cytoplasm of conjunctival epithelial cells, but also spreads via the bloodstream to a variety of other tissues, such as the tonsil, lung, liver, spleen, gastrointestinal tract, and kidney.23 Infection is typically followed 2 to 5 days later by the development of acute, chronic, or recurrent conjunctivitis, with or without signs of rhinitis such as nasal discharge and sneezing. Most cats remain otherwise well and appetent. Lower respiratory tract signs such as cough and dyspnea rarely, if ever, occur. Corneal disease such as keratitis or corneal ulceration is rare and, if present, is likely caused by other or co-infecting pathogens such as FHV-1. Experimental inoculations have also been followed by signs of fever, lethargy, lameness and joint pain (possibly due to polyarthritis), and weight loss, in addition to conjunctivitis.24 There are also rare reports of gastritis and peritonitis in association with the detection of chlamydia-like organisms in cats.25,26

After the initial episode of acute conjunctivitis, infection may persist for many months. This may be accompanied by mild conjunctivitis or, in some cases, no clinical signs of disease. Organisms can be isolated from the conjunctiva for up to 215 days after experimental infection.27,28 Whether chronic disease is the result of repeated reinfection or the presence of persistent chlamydiae is unclear. Co-infections with other agents such as FCV, FHV-1, Bordetella, or Mycoplasma may increase the severity of disease and duration of shedding. Other bacteria, including those that normally colonize the healthy conjunctival sac, also act as secondary invaders and worsen disease.

Whether C. felis causes reproductive disease in cats remains unclear. The stage of pregnancy at which infection occurs, co-infection with other organisms such as FHV-1, concurrent immunosuppression, route of infection, and the strain involved may be important in determining the ability of C. felis to cause reproductive dysfunction, if this indeed occurs in cats.

Chlamydial infections are infrequently described in dogs. Chlamydia psittaci has been detected in dogs with respiratory disease, such as pneumonia and pleural effusion, and/or keratoconjunctivitis.6-8 One group of bitches that had ocular and lower respiratory signs as well as stillbirths and low litter size had nasal, conjunctival, and pharyngeal swab specimens that tested positive for C. psittaci with a PCR assay.6 Chlamydia abortus was detected in a dog with keratoconjunctivitis.9 The DNA of C. pneumoniae was detected in atherosclerotic lesions from dogs in Japan,10 and chlamydia-like organisms were found in a dog from South Africa with polyarthritis.11 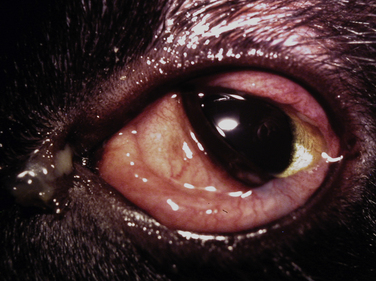 There are no clinically significant laboratory abnormalities in cats with chlamydiosis, and there is insufficient information on laboratory abnormalities that might occur in affected dogs. Diagnosis of chlamydiosis is most often based on the results of molecular testing using PCR assays (Table 33-2). For all diagnostic tests that detect chlamydial organisms, sufficient numbers of infected epithelial cells must be collected. This generally involves vigorous swabbing of infected mucosal sites such as the conjunctiva.

Diagnostic Assays Available for Chlamydiosis in Dogs and Cats