Despite the relative ease of pacemaker placement and satisfactory clinical results, optimal ACP requires increasing attention to the growing list of pacemaker capabilities, programming parameters, and potential complications. Since the first veterinary implantation in the early 1960s (Buchanan, 2003), ACP has been the subject of much study. The reader is directed to reviews discussing the indications, equipment, technique, and practice of ACP in veterinary medicine (Moise, 1999; Rishniw and Thomas, 2000; Sisson et al, 1991). After briefly reviewing the current method of artificial pacing, this update highlights potential limitations of conventional ACP and then introduces technologies that advance the treatment of symptomatic bradyarrhythmias.

Conventional transvenous ACP typically is accomplished by placing a pacing lead into the right ventricular apex via the jugular vein. The distal tip of the lead is passively or actively secured into the ventricular endocardial surface, and the proximal end exits the external jugular vein and is attached to a battery-powered generator. The vast majority of ACP systems implanted in this manner are programmed both to detect and to administer electrical impulses at the right ventricular apex. The usual mode of pacing accomplished in this fashion, in which the pacing system performs two functions, is indicated by the three-letter code VVI. The first function involves the sensing of native cardiac depolarizations in the ventricle, during which time the pacing system is quiescent (or inhibited). The second involves delivery of an electrical pacing discharge after a prescribed time period during which no native electrical activity is detected. This so-called demand pacemaker function prevents periods of asystole and associated clinical signs.

The performance of modern artificial pacing systems can be fine tuned using a wide array of programmable parameters that, when properly set, allow safe, stable, and long-term treatment (Web Table 59-1). For example, the pulse duration and amplitude of the pacing discharge can be adjusted to maximize battery life while still ensuring functional depolarization of the ventricle. A number of pacing parameters can be adjusted after surgery via telemetric communication with a portable programming computer. To ensure safe and effective pacing, meticulous attention must be given to the proper programming of the pacemaker system parameters. Improper settings can lead to loss of pacing, inappropriate delivery of pacing stimuli, induction of ventricular arrhythmias, congestive heart failure, syncope, and sudden death. In one study, inappropriate asynchronous pacing was reported in 42% of dogs receiving ACP systems, which highlights the need for follow-up examinations and proper programming (Moise and Estrada, 2002). In humans, improper VVI pacing has been associated with sudden death (Zehender et al, 1992). The causative mechanism likely involves sensing abnormalities, improper timing of pacing discharges, and induction of ventricular fibrillation. In canine patients with ACP, a small but significant percentage of patients (13%) experience sudden unexpected death, presumably from arrhythmia (Oyama et al, 2001). 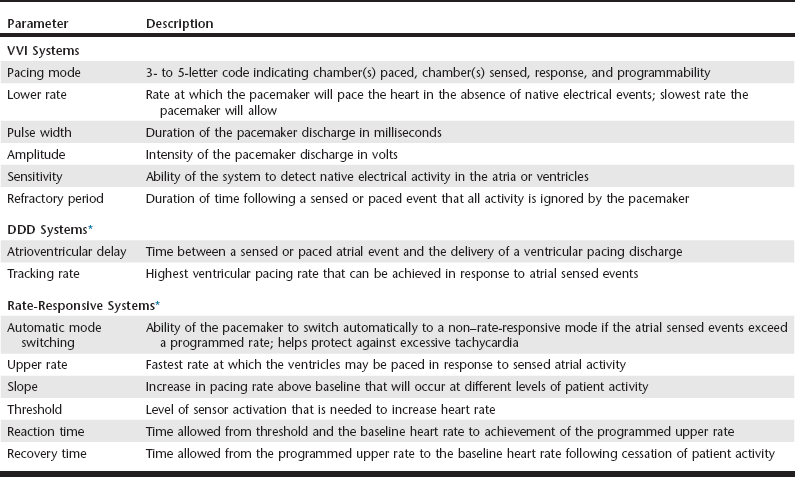 *Parameters found in the specific pacing mode in addition to those found in VVI mode.

During the first several months following pacemaker implantation, routine electrocardiographic (ECG) examinations are advisable so that improper pacemaker function can be identified and corrected. Many modern pulse generators store a record of their sensing and pacing activity in their resident memory, which allows the examiner to evaluate pacing system behaviors over a long period and thus facilitates the identification of intermittent pacemaker dysfunction. In cases in which intermittent malfunction is suspected, 24-hour ambulatory ECG (Holter) monitoring also can be performed. Annual or biannual rechecks are advisable to ensure continuation of proper function, to monitor generator battery life, and to detect any developing ACP-related complications.

Although the clinical outcome of ACP is very favorable in most cases, the incidence of complications, both major and minor, is relatively high. In retrospective studies of dogs after pacemaker implantation, between 14% and 55% of dogs undergoing ACP experienced a major pacemaker-related complication (Oyama et al, 2001; Wess et al, 2006). The most commonly reported complication of ACP implantation in dogs is dislodgement of the pacing lead from the right ventricle. Lead displacement typically results in a loss of sensing or pacing. Ventricular tachycardia sometimes is observed if the dislodged lead tip repeatedly impacts the right ventricular endocardium. Lead displacement typically requires a second operative procedure to reposition the lead properly and reestablish normal ACP. Other reported pacemaker complications include generator malfunction, infection, lead-associated thrombosis, and right ventricular perforation by the pacing lead (Cunningham et al, 2009). The rate of complications decreases with increasing experience of the operator. Regardless of the propensity for complications, the remarkable improvement of clinical signs achieved by ACP causes most owners to report a high level of satisfaction with the procedure. The long-term results of ACP using current systems of implantation are encouraging, with approximately 65% of patients still alive 3 years after implantation (Johnson et al, 2007). The presence of severe preexisting heart disease and congestive heart failure negatively influences survival.

Although ACP using the VVI mode is the method most commonly implemented, this modality has several important drawbacks. By virtue of its programming and placement within a single ventricular chamber, VVI pacing results in (1) a fixed heart rate, which leads to loss of native heart rate control during times of exercise and rest; (2) an abnormal sequence of cardiac depolarization, evidenced by the wide and bizarre morphology of the QRS complex seen on a surface ECG (Web Figure 59-1), which impairs ventricular performance and may cause or contribute to the development of heart failure; and (3) loss of coordinated atrial and ventricular contractions (atrioventricular synchrony), which reduces cardiac output and raises atrial pressure as the atria intermittently contract against a closed mitral and tricuspid valve (Web Figure 59-2). The consequences of these deficiencies have not been defined clearly in dogs, but consideration must be given to the role of VVI pacing systems in treated dogs that subsequently develop myocardial failure, thrombotic obstruction of the cranial venal cava, or thromboembolic pulmonary disease. In humans, these deficiencies contribute to the development of “pacemaker syndrome” manifested as fatigue, dizziness, weakness, and on occasion congestive heart failure. Resolution of these signs is accomplished through the application of more advanced and increasingly physiologic ACP modes that use multiple pacing leads, alternate programming algorithms, or specialized single-lead systems.

Web Figure 59-1 Lead II electrocardiogram for a dog with a single-chamber pacemaker in VVI mode (paper speed 50 mm/sec). The electrical discharge from the pacing lead (A) is followed immediately by a QRS complex representing ventricular depolarization (B). Because of the location of the pacing lead within the right ventricular apex, the sequence of ventricular depolarization is altered and delayed, which results in a QRS complex and T wave with abnormal morphology. Retrograde conduction of the ventricular impulse across the atrioventricular node and into the atrium is suggested by the biphasic P wave seen in the ST segment (C).