Overview of Brucellosis in Dogs

First Described: B. canis was first isolated from dogs by Leland Carmichael in 1966 (USA)1

Geographic Distribution: Worldwide, but infections are most often reported from the southwestern United States, Central and South America, China, and Japan

Human Health Significance: B. canis can be transmitted to humans and most often causes mild, influenza-like illness.

Canine brucellosis is caused by Brucella canis, a small, gram-negative, non–spore-forming aerobic coccobacillus. Brucella abortus, Brucella melitensis, and Brucella suis occasionally cause canine infections but are comparatively rare.2,3 B. canis infections are zoonotic, but other species of Brucella present a greater risk to human health.4,5

Brucellosis is the primary contagious infectious venereal disease of concern in canine reproduction. Brucella canis causes reproductive failure in both male and female dogs. Screening for B. canis infection is an important part of the pre-breeding evaluation of any dog and should be included in the initial diagnostics in any case of canine abortion, orchitis, epididymitis, and apparent infertility in bitches or dogs. Because the incidence of canine brucellosis is low in many geographic locations, breeder compliance with regular screening can wane, which makes continued veterinarian vigilance important. Notably, neutered and maiden or virgin dogs can also be infected. B. canis can also cause systemic disease (such as discospondylitis) in dogs not used for reproduction. Dogs with B. canis discospondylitis are typically medium- to large-breed dogs, with body weights that range from 14 to 64 kg; dogs have ranged in age from 1 to 8 years, with a median of 4 years in one study.6-9 Of 22 dogs with B. canis discospondylitis known to the authors, 18 (82%) were intact male dogs, 3 (14%) were female spayed, and 1 (4%) were male neutered.6,8–10 Three dogs described in the literature with B. canis ophthalmitis did not fit this signalment; one dog was a Pomeranian and none were intact males.11

Transmission of B. canis occurs through direct exposure to body fluids that contain sufficient numbers of bacteria to cause infection (2 × 106 CFU), most often semen, lochia, aborted fetuses/placentas, milk, and/or urine. Transmission is therefore primarily oral, nasal, or conjunctival and secondarily venereal (i.e., through the mucous membranes). Oronasal and conjunctival exposure follows the ingestion or aerosolization of infectious materials. The aerosol route is especially important in crowded kennel conditions. Transplacental transmission and direct cutaneous inoculation can also occur. Although fomite-associated transmission can occur under appropriate circumstances, B. canis is short-lived outside the host and is readily inactivated by common disinfectants, such as quaternary ammonium compounds, 1% sodium hypochlorite, 70% ethanol, iodine/alcohol solutions, and glutaraldehyde.12

Members of the Canidae family are the natural hosts of B. canis. Canine brucellosis occurs most commonly as outbreaks in large commercial kennels, and less commonly in privately owned dogs. Although the geographic distribution of canine brucellosis is not fully understood, outbreaks of canine brucellosis have geographic orientation, with increased incidence seen in the southernmost United States and commonly in Mexico, Central and South America, the People’s Republic of China, and Japan. There are sporadic reports of disease in Canada and throughout Europe.7,13–17 Australia and New Zealand appear to be free of the disease. However, because infection with B. canis is chronic and subclinical, the organism can readily be imported into regions where the prevalence of disease is low through the movement of infected dogs. The increased practice and success of canine semen processing for exportation (chilling and cryopreservation) for the purpose of artificial insemination now makes canine brucellosis a concern worldwide, as direct mucosal contact among dogs is no longer necessary for transmission.

Brucella organisms attach to and penetrate mucous membranes; the severity of disease is proportional to the infectious dose. After replication in regional lymph nodes, bacteremia occurs within 7 to 30 days after exposure with subsequent dissemination to reticuloendothelial cells, the prostate, uterus, and placenta. B. canis has a predilection for steroid-dependent (reproductive) tissues. The organism survives facultatively within monocytes and macrophages of the reticuloendothelial system. Brucella organisms can survive and multiply in reticuloendothelial cells because they inhibit the bactericidal myeloperoxidase-peroxide-halide system through the release of 5′-guanosine and adenine. Early in infection, polymorphonuclear cells and macrophages kill intracellular B. canis relatively ineffectually.18

Brucella organisms can be found in the rough endoplasmic reticulum of placental trophoblastic giant cells in an infected bitch’s gravid uterus. Severe necrotizing placentitis with infarction of the labyrinth region, coagulation necrosis of the chorionic villi, and necrotizing arteritis result in fetal death. The organism can be found in the gastric contents of aborted fetuses. Necrotizing vasculitis and granulomatous inflammation results in epididymal and subsequent testicular and prostatic pathology.3,19

Brucellosis in dogs is associated with a high morbidity but low mortality. The clinical systemic signs are often subtle and include suboptimal athletic performance, lumbar pain, lameness, weight loss, and lethargy. The primary clinical sign of canine brucellosis in the breeding bitch is pregnancy loss, which can occur early (day 20) in gestation resulting in fetal resorption, or more commonly (75% of dogs) later in gestation (generally 4 to 59 days), which results in abortion (Figure 53-1). Bitches with pregnancy loss early in gestation can appear to be infertile (fail to conceive) unless early ultrasonographic pregnancy evaluation is performed to identify pregnancy. Nongravid bitches can show no signs or can show regional lymphadenopathy (pharyngeal if orally acquired, inguinal and pelvic if venereally acquired). 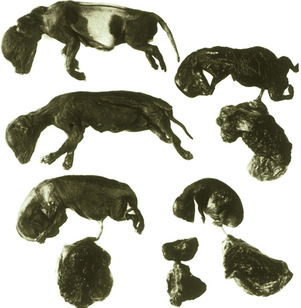 The primary acute clinical signs of canine brucellosis in the male dog involve the portions of the reproductive tract that participate in the maturation, transport, and storage of spermatozoa. Epididymitis is common, with associated orchitis and scrotal dermatitis, and resultant deterioration of semen quality and fertility. Chronically, testicular atrophy and infertility can occur. The organism can be found in the prostate gland and urethra and is shed intermittently in the urine. Anti-sperm antibodies develop in association with brucellosis-induced epididymal granulomas and further contribute to infertility. Pyospermia develops 3 to 4 months postinfection. Chronic infections in either sex can result in uveitis or endophthalmitis, lymphadenitis, splenomegaly, or discospondylitis; occasionally, dermatitis and meningoencephalitis have been reported (Figure 53-2).3,8,11,20 Owners of dogs with discospondylitis most often describe episodic neck pain or lameness, which can occasionally be accompanied by lethargy or decreased activity. Bacteremia can persist for years, and subclinically infected dogs can remain infectious for long intervals. Infection of the bone that surrounded a total hip replacement was described in two dogs 9 and 12 months after surgery.21 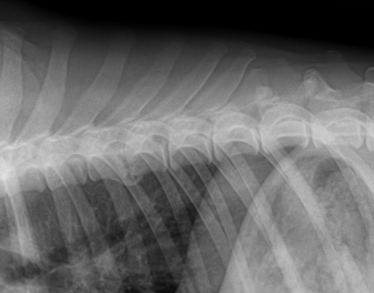 Large numbers of organisms are shed in the vulvar discharge of bitches 4 to 6 weeks postabortion. The highest concentration of organisms is shed in the semen of infected dogs 2 to 3 months postinfection, with lesser amounts for years. Urine can serve as a contaminated vehicle because of the proximity of the urinary and genital tracts in the dog, with shedding present for months to years, and is more prevalent in males. Organisms can also be shed in milk.22-24

Spontaneous apparent recovery can occur 1 to 5 years postinfection, but true clearance of the organism is difficult to document. Bitches that have been treated with antimicrobial drugs can produce normal litters after multiple abortions, but can remain infectious to their offspring. Dogs may remain infertile because of irreparable damage to the spermatogenic apparatus.3,23

For dogs with clinical B. canis infections, fever is rarely present. Affected male dogs may have an enlarged but nonpainful scrotum and secondary scrotal pyoderma, which results from excessive licking. Enlargement of the epididymis is often present. Some chronically infected male dogs have small, soft testicles due to testicular atrophy. Other dogs have generalized peripheral lymphadenomegaly, and splenomegaly may be detected on abdominal palpation. The most common finding in dogs with discospondylitis is spinal pain.8,9 Other findings include lameness, delayed placing reactions, ataxia, pelvic limb hyperreflexia, and, uncommonly, pelvic limb paresis or tetraparesis. Meningoencephalitis may result in behavioral changes, anisocoria, ataxia, circling, or a head tilt. For unknown reasons, ocular abnormalities are often unilateral and include blepharospasm, conjunctival hyperemia, and evidence of uveitis, such as aqueous flare, miosis, iris hyperpigmentation, loss of the normal contour of the iris surface, hypopyon, posterior synechiae, and secondary glaucoma.11 Corneal edema, vitreous opacities, swelling and hyperemia of the optic disc, and evidence of multifocal granulomatous chorioretinitis have also been described. Ocular abnormalities and discospondylitis are frequently present in the absence of other systemic signs of illness. However, some, but not all dogs with discospondylitis have other, subtle physical examination abnormalities that suggest brucellosis, such as dermatitis, uveitis, small testicles, or lymphadenopathy.8

The diagnosis of canine brucellosis is based on suggestive clinical signs and the results of serology; culture of blood, urine, or tissues; histopathology; and/or PCR assays. Because no single antemortem test has 100% sensitivity, and serologic assays lack specificity, a combination of diagnostic assays is often required to make a diagnosis (Table 53-1). When multiple dogs with infertility problems are present in a household or kennel, as many dogs as possible should be tested with serology and blood culture to increase the chance of a reliable diagnosis. 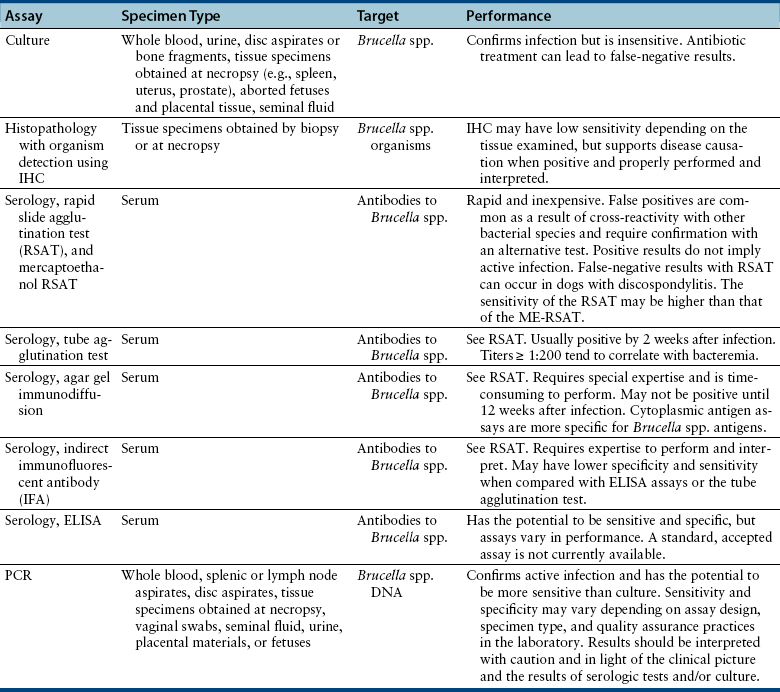 The results of routine laboratory tests are often within reference ranges in dogs with brucellosis. The CBC may show leukocytosis due to a neutrophilia.11 Degenerate left shifts, monocytosis, and/or lymphopenia have been uncommonly reported.9,20 The chemistry panel is often normal, but hyperglobulinemia and hypoalbuminemia may be present. A lack of abnormalities on routine laboratory testing or the presence of splenomegaly or abdominal lymphadenomegaly in dogs with discospondylitis should raise suspicion for B. canis infection. Urinalysis is generally within normal limits, even when B. canis bacteriuria is present.

Aspirates of the spleen or lymph nodes of dogs with brucellosis reveal lymphoid reactivity, sometimes with plasmacytosis. Prostatic aspirates in one dog with prostatitis showed granulomatous inflammation with intracellular gram-negative coccobacilli.7

CSF analysis in dogs with Brucella discospondylitis is usually unremarkable. A dog with meningoencephalitis had neutrophilic pleocytosis and increased CSF protein concentration.3 Aspirates of ocular fluids (aqueous or vitreous humor) from a dog with panophthalmitis revealed pyogranulomatous inflammation with extracellular and intracellular small gram-negative cocci.11

Diminished sperm counts (oligospermia), poor motility (asthenospermia), and increased morphologic abnormalities (teratospermia) are characteristic of semen in dogs infected with Brucella. Detached sperm heads, proximal and distal cytoplasmic droplets, and acrosomal deformities are the most common morphologic abnormalities. Sperm head-to-head agglutination suggests the presence of anti-sperm antibodies. An absence of sperm in the ejaculate (azoospermia) can also be found.