Overview of Canine and Feline Bordetellosis

Human Health Significance: B. bronchiseptica is closely related to B. pertussis and Bordetella parapertussis, which cause whooping cough in humans. Uncommonly, it has been associated with respiratory disease in humans and rarely systemic infections such as peritonitis, septicemia, and meningitis. It primarily causes disease in the immunocompromised. Contact with dogs and cats has been associated with human infections, but host specificity may also be strain related.

Species That Belong to the Genus Bordetella


Worldwide, B. bronchiseptica is an important cause of respiratory disease in dogs and cats; it also infects and causes respiratory illness in many different animal species including wild carnivores, pigs, rabbits, and occasionally horses, other herbivores, rodents, turkeys, and humans. There are a large number of different strains of B. bronchiseptica that vary in virulence and host specificity. Nevertheless, the results of molecular typing efforts have shown that strains that infect dogs can be passed to cats and vice versa.7-9 The whole genome of B. bronchiseptica has been sequenced.10 Its genome is larger than that of its close relatives, and it possesses several plasmids, some of which mediate antimicrobial drug resistance.11

Like viral respiratory infections, bordetellosis is especially prevalent in dogs and cats in shelter, pet stores, boarding facilities, and other situations where large numbers of potentially stressed animals may have been in close contact with one another. Infections with B. bronchiseptica frequently occur in concert with respiratory viral and/or Mycoplasma spp. infections (see Chapters 17, 23, and 40). Unlike B. pertussis and B. parapertussis, B. bronchiseptica can persist in the environment for at least 10 days and can grow in natural water sources,12 but is susceptible to most disinfectants provided they are used correctly.

Transmission of B. bronchiseptica occurs primarily by the airborne route, but contact with contaminated fomites and water sources may also be important. The organism is highly contagious. Much of what is known about B. bronchiseptica pathogenesis is based on studies of infections in host species other than the dog or cat. B. bronchiseptica is inhaled, adheres to respiratory cilia, evades the immune system, and secretes toxins that damage the respiratory epithelium(Figure 38-1). Adhesion of virulent strains of B. bronchiseptica to respiratory cilia occurs by means of fimbrial adhesins (FIM), a filamentous hemagglutinin (FHA), pertactin, and cell wall lipopolysaccharide. Bordetella colonization factor A (BcfA) is another outer membrane protein that appears to be important for tracheal colonization by B. bronchiseptica.21 B. bronchiseptica possesses genes that encode for pertussis toxin, an important adhesin in B. pertussis. These genes are not expressed in vitro, but there is some evidence for pertussis toxin expression in vivo.22 Evasion of host defenses is mediated by the organism’s outer capsule (which is absent in B. pertussis and B. parapertussis), adenylate cyclase toxin, and pertactin. The capsule protects it from phagocytosis and destruction by complement. Adenylate cyclase toxin catalyzes the conversion of ATP to cAMP, which inhibits the migration and activation of phagocytes and T-lymphocytes. Pertactin allows the organism to resist neutrophil-mediated clearance.23 A type VI secretion system also appears to play a key role in persistence of B. bronchiseptica.24 Other virulence determinants present in the outer membrane include lipopolysaccharide and the Brk protein (Bordetella resistance to killing), which allow the organism to resist complement-mediated destruction. At least two other important exotoxins damage respiratory epithelial cells and cells of the immune system, and incite cytokine production: tracheal cytotoxin (TCT) and dermonecrotic toxin (DNT). B. bronchiseptica also possesses a type III secretion system that allows it to inject as-yet-undefined effector proteins into cellular targets.5 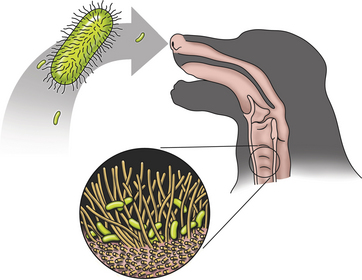 The inflammation and altered cell function that occur as a result of B. bronchiseptica infection lead to increased fluid and mucus secretion, and impairment in host innate immune defenses predisposes to opportunistic viral and bacterial infections. Clinical signs vary in severity and may reflect factors such as the bacterial strain involved, host immunity, and the presence of co-infections. The incubation period ranges from 2 to 10 days. Rhinitis and tracheobronchitis may be associated with serous to mucopurulent nasal discharge, sneezing, stertor, and, especially in dogs, a persistent, often paroxysmal harsh cough. In some dogs, development of bronchopneumonia leads to fever, productive cough, lethargy, and decreased appetite. Bronchopneumonia may be due to B. bronchiseptica itself or it may result from co-infection with other respiratory pathogens, such as canine distemper virus (CDV). In cats, infection is significantly associated with sneezing, and cough is uncommon.14 Cats with pneumonia may develop tachypnea, cyanosis, and death.

Shedding of B. bronchiseptica by both dogs and cats can continue intermittently for at least a month and sometimes several months after infection. Evasion of the immune system through survival inside phagocytes may explain the persistent infection that occurs. In contrast, B. pertussis is rapidly destroyed by macrophages.25

On physical examination, dogs with uncomplicated bordetellosis are bright, alert, and active with a paroxysmal cough that can occur throughout the examination. The cough is often easily elicited on tracheal or laryngeal palpation. Conjunctivitis and serous to mucopurulent ocular and nasal discharge may be present in affected dogs and cats (Figure 38-2). Dogs and cats with complicated Bordetella bronchopneumonia may be pyrexic, lethargic, and tachypneic with increased respiratory effort. There may also be increased lung sounds and/or referred upper airway noises on thoracic auscultation, and mucopurulent nasal discharge. 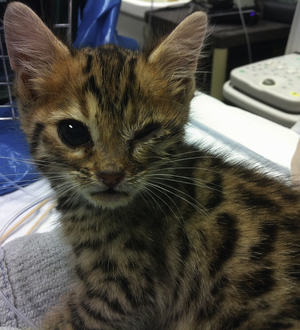 FIGURE 38-2 Kitten with Bordetella bronchiseptica conjunctivitis and bronchopneumonia. The kitten was tachypneic and had mucopurulent ocular discharge.

There are no specific laboratory abnormalities in uncomplicated bordetellosis. Usually the CBC is normal. Dogs with bronchopneumonia can also have a normal CBC,26 or a mild to moderate neutrophilia, bandemia, and toxic neutrophils may be present. Cytologic examination of transtracheal lavage (TTL) or bronchoalveolar lavage (BAL) specimens may reveal a suppurative or mixed exudate, and sometimes intracellular and extracellular coccobacilli are visible (Figure 38-3).

Plain thoracic radiographs in dogs with uncomplicated bordetellosis may be unremarkable or show a mild diffuse interstitial or bronchointerstitial pattern. Bordetella bronchopneumonia may be characterized by development of peribronchial and alveolar infiltrates and lobar consolidation.

The main assays used for diagnosis of bordetellosis in dogs and cats are aerobic bacterial culture and PCR assays, which can be performed on nasal or oropharyngeal swabs, TTL or BAL specimens, or respiratory tract tissue collected at necropsy (Table 38-2). In some studies, B. bronchiseptica has been detected in nasal but not oropharyngeal swabs, but in other studies, the use of oropharyngeal swabs was more sensitive. Collection of swab specimens from the nasal cavity or posterior nasopharynx is preferred for diagnosis of pertussis in humans because these regions have ciliated epithelial cells, for which B. pertussis has affinity.27 False-negative results occur when organism numbers in secretions are low, and depending on the sensitivity of the PCR assay used and the viability of the bacteria in the specimen, culture may be positive when PCR is negative and vice versa. Although the detection of B. bronchiseptica in TTL or BAL specimens is diagnostic for bordetellosis, it may be more difficult to interpret the significance of a positive culture or PCR assay result from nasal or oropharyngeal swabs, especially among group-housed dogs and cats when the background prevalence of infection is high. Co-infections with viral respiratory pathogens should always be considered when B. bronchiseptica is detected, as well as the presence of other comorbidities that suppress the innate or adaptive immune system that could predispose to bordetellosis (e.g., ciliary dyskinesia or brachycephalic obstructive syndrome in dogs, retroviral infections in cats).

Diagnostic Assays Available for Bordetellosis in Dogs and Cats