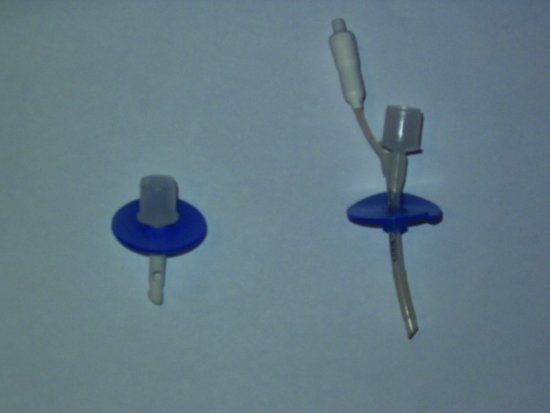 5. The outlet of the anaesthetic circuit may then be attached to the free end of the tube to administer anaesthetic or oxygen. Alternatively, in the conscious bird the air-sac tube is cut short and may be left in place for normal breathing for 3–4 days whilst the bird’s condition is treated.

Bradycardia often precedes cardiac arrest and is due to heart blocks developing (similar to those in small mammals). If this is detected quickly, administration of atropine (0.01–0.02 mg/kg IM/IV) or glycopyrrolate (0.01 mg/kg IM/IV) may be enough to reverse this.

If cardiac arrest has occurred, then the prognosis in birds is poor. This is owing to the fact that the heart is protected behind the keel/sternum and ribs and so external massage is less effective than in mammals. In addition, there is no diaphragm and so clinicians cannot use the thoracic pump mechanism to increase overall negative thoracic pressure. Adrenaline may be administered, preferably intratracheally, at 0.01–0.02 mg/kg with atropine 0.02–0.04 mg/kg. Application of regular compressions on the caudal sternum can be attempted to start cardiac massage. The patient is best placed in dorsal recumbency to allow better compression of the heart with the sternum, but be aware that positive pressure ventilation is more difficult in this position owing to the pressure of the viscera on the lungs and heart.

See Table 16.1 for tabulated information on emergency drugs in birds. In cases of respiratory arrest, administration of 0.5 mg/kg doxapram, per os or intravenously, is advised followed by intubation and manual or machine-assisted IPPV. If cardiac arrest occurs, then intubation and intratracheal administration of adrenaline (0.05 mL for a budgie and up to 0.5 mL for a grey parrot) followed by compression of the cranial chest wall between finger and thumb five times in a row, followed by five breaths via an ET tube, and then five compressions of the chest wall etc. may allow revival. Intubation should be attempted wherever possible. However, if it is not possible, then a face mask with 100% oxygen is used and the resuscitator places the bird in lateral recumbency and grasps the uppermost wing at the carpal joint and rhythmically pumps the wing up and down. This has the effect of raising and depressing the chest wall, thus simulating inspiration and expiration.

Other drugs used before a diagnosis can be accurately made include broad spectrum antibiosis. Often combinations of a fluoroquinolone (e.g., enrofloxacin (Baytril2.5%® Bayer Animal Health) at 10 mg/kg b.i.d. or marbofloxacin (Marbocyl Small Animal Injection® Virbac) at 10 mg/kg s.i.d.) and a potentiated penicillin (e.g., amoxicillin/clavulanate at 150 mg/kg b.i.d.) are advised as these will cover most of the bacterial pathogens seen in avian medicine. If aspergillosis is suspected, then nebulisation of drugs such as Amphotericin B (Fungizone® Squibb) and F10® (Health and Hygiene Pty) may be of some help, as is an intravenous bolus of Amphotericin B (at 1.5 mg/kg IV) or oral itraconazole (Itrafungol® Janssen) (at 5–10 mg/kg b.i.d.) or oral terbinafine (at 10–15 mg/kg b.i.d.).

In the case of birds such as grey parrots or in laying hens/birds on poor quality diets where a possible calcium deficiency may be a cause for collapse of the patient, the use of calcium gluconate is advised. Doses of 50–100 mg/kg IM have been quoted. Doses of 0.2–0.5 mg/kg diazepam may be needed to control seizure initially in some of these cases.

Where heavy metal poisoning (mainly lead or zinc) is suspected, the chelating agent sodium calcium edetate should be used at 20–50 mg/kg IM b.i.d. Fluid therapy should always be used as heavy metals and possibly this drug itself may be nephrotoxic.

Where egg binding has occurred, it is vital to keep the patient warm, quiet and well hydrated. Use of prostaglandin E2 gel applied directly to the oviduct sphincter inside the cloaca is necessary to help release the sphincter and encourage contraction of the uterine muscle. In some circumstances, collapsing the egg inside the bird either by puncturing it through the cloaca with a needle or via a midline ventral abdomen insertion of a needle attached to a syringe may be necessary to relieve pressure from the abdomen, which can cause ischaemic necrosis of the vital organs due to the relatively large size of bird eggs.

ECG traces may be taken from birds, although it is preferable to anaesthetise the bird to perform them. It is also helpful to blunt the alligator teeth on the clamps as these can traumatise the skin very easily. The bird is placed in dorsal recumbency and the clips attached to the skin of the thighs and the skin of the propatagium (the bit of skin between the shoulder and carpus of the wing on the wings’ leading edge). Alternatively, place hypodermic needles through the skin of the wings and thighs, and attach the clamps to these.

In most avian species, the lead II trace appears as a mammalian one, except the QRS complex appears inverted. This is not the case, but rather it occurs because the S wave is the dominant deflection and the Q wave hardly records at all. For this reason, bird’s QRS waves are often referred to as ‘rS’ waves. P and T waves are as for mammals (see Figure 16.3). Occasionally in some species (pigeons, some parrots), there is a small depression wave known as a Ta wave immediately after the P wave and this is normal (it represents atrial repolarisation) see Figure 16.4. In addition, the P on T phenomena (where the P wave is superimposed onto the following T wave) is a normal finding in some African grey and Amazon parrots. 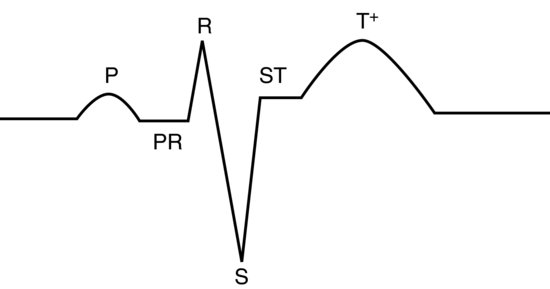 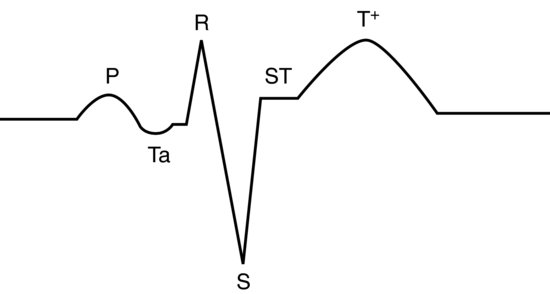 Values for ECGs in birds have been published but vary between species and exceed the scope of this text. Many birds have heart rates too fast to record on even 50 mm/second traces. It is more important to look for arrhythmias such as severe bradycardia (a common abnormality before cardiac arrest in anaesthetised birds) instead.

Assessment of cardiac output by using end-tidal CO2 level has been suggested (Lichtenberger, 2007). A steady increase in end-tidal CO2 during CPCR should occur and if it has not exceeded 10 mm Hg after resuscitation has been ongoing for 15–20 minutes, the prognosis is poor.

Venous blood is preferable for assessment of blood gases and pH as this more closely represents the body organ’s status than arterial blood does.

Mucous membrane colour should be assessed where possible – the lining of the cloaca or the mouth are the two best sites in birds. Cloacal temperature may also give an indication of peripheral perfusion and should be 40–42°C.

Blood pressure may be monitored as described below under monitoring of acute hypovolaemia.

Do not be too quick to physically restrain the sick avian patient, particularly if it is a small species and/or in respiratory distress. Severe respiratory distress is obvious, with respiratory stertor, wheezes and whistles, but subtle changes such as an increase in respiratory rate, tail bobbing and nasal discharge/blocked nares may all indicate relatively serious respiratory pathology. Birds have no diaphragm and therefore rely on the outward movement of the ribcage and downward movement of the keel to allow inspiration. Any restriction of this (coupled with a stress response increase in oxygen demand) will lead to hypoxia, possible cardiac ischaemia and arrest.

Examine in cage first, use dimmed/blue/red lighting. If in doubt, admit to place the patient in an oxygen-enriched atmosphere +/− nebulisation with saline first. Then see if you can physically restrain the patient for examination. It may be anaesthetising the patient in 100% oxygen with isoflurane is the preferred method.

Initial assessment should look at the following points: