Figure 15.2 Positioning for a standard ventrodorsal view radiograph in a bird. 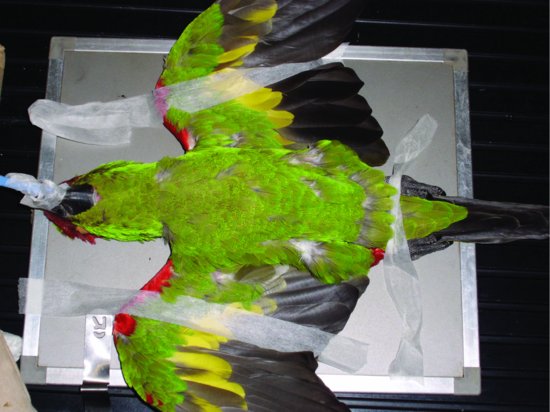 This is routinely used to highlight foreign bodies in the gastrointestinal tract, and to differentiate opacities in the caudal coelom, such as retained eggs, from the rest of the coelomic contents. Usually, it is only performed in stabilised patients as it requires 3–4 hours fasting to empty the gut out, and it requires that the patient be conscious for serial radiographs, which is stressful (although it may be performed using horizontal beam radiography with the bird on a perch). For the smaller birds such as cockatiels and budgerigars, 3–5 mL of a 25–30% barium mixture should be crop tubed. For larger birds such as African grey parrots and Amazons, 12–15 mL may be used, and for the larger macaws, 20–30 mL. Serial radiographs are taken at 30 minutes and then hourly until 2 hours post administration, then at 4, 8 and 24 hours post administration.

Transit times vary with species, an African grey parrot’s proventriculus will empty around 10–30 minutes post administration of barium sulphate into the crop, reaching the small intestines around 30–60 minutes, the large intestine at 60–120 minutes and the cloaca at 120–130 minutes (see Figure 15.3). Many hawks on the other hand will show proventriculus emptying times around 5–15 minutes post crop tubing, reaching the small intestine around 15–30 minutes, the large intestine around 30–90 minutes and the cloaca around 90–360 minutes (McMillan, 1994).

Barium will also highlight dilations of the crop, and proventriculus as can occur in some neuropathies, or parasitic diseases, as well as swellings, growths, ulcers, etc.

Iodine, aqueous-based techniques may be used for intravenous excretory urography examinations when examining the kidney structures for the presence of abnormalities, or for angiography (although fluoroscopic techniques rather than traditional film cassette-based radiography is required for this) techniques.

In addition, conditions such as choanal atresia, which is a common cause of a permanent clear sinus discharge, may be elucidated by iodine-based contrast techniques injected into the nasal sinuses.

The avian skeleton is significantly different from its mammalian cousin. Many bones have become fused, e.g. no tarsal bones survive; the proximal row having fused to the distal end of the tibia, forming the tibiotarsus; and the distal row fusing with the proximal metatarsals forming the tarsometatarsus. Birds possess a prominent keel in many species, particularly Psittaciformes, formed from the fusion and extension of the sternal vertebrae (see Figures 15.4 and 15.5). However, some species such as the ratite family and many waterfowl have a flattened, more boat-shaped sternum without the prominent midline crest. Many bones are pneumonised (i.e. connected to the air sac system and therefore have an air-filled medullary cavity rather than bone marrow); common examples include the femur and the humerus, although individual species vary. The pelvis is not fused having two separate slender pubic bones projecting caudal to the femur. The dorsal aspect of the pelvis forms a protective dome fusing with the sacral bones forming the synsacrum. The thoracic vertebrae and sacral vertebrae are both largely fused and immobile. In contrast the cervical vertebrae are highly mobile. 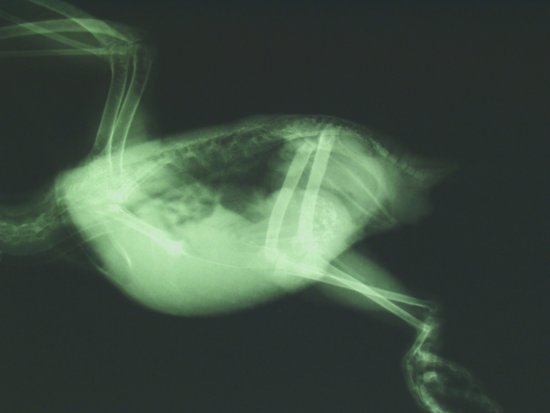 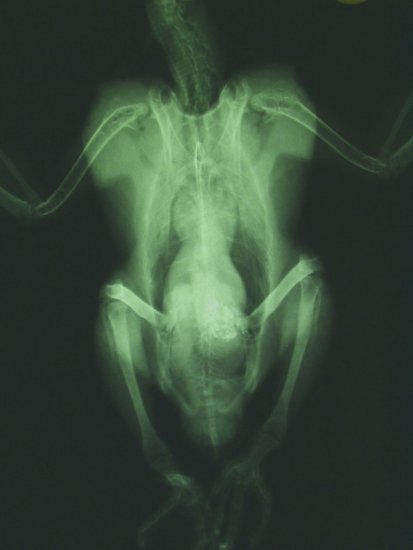 The body cavity, as with reptiles, is not divided into a thorax and abdomen as there is again no diaphragm. In addition, the avian lungs are a rigid structure, paired and closely adherent to the dorsal body wall in the cranial coelom and appear homogenously mottled on lateral radiographs. The air sacs which fill the coelom appear as marked radiolucent areas, and allow clear definition of many internal organs. The trachea is mobile and elongated, and may have many coils in certain species of waterfowl such as the trumpeter swans. In many ducks, such as the common mallard, the trachea may have a swelling at its base formed by a bulla, which is a perfectly normal finding.

On lateral radiographs, the heart may be clearly seen with the major arterial and venous trunks leaving and entering it. The caudal border of the heart merges with the liver shadow. Dorsal to the liver lies the spleen, which is spherical in many cage birds, and enlarges markedly during infectious diseases such as chlamydophilosis. In addition, in this region lies the ‘true’ acid secreting stomach or proventriculus, and immediately caudal to this lies the often grit filled in granivorous species, ventriculus, gizzard or second stomach. Caudal to this lie the intestinal mass. The kidneys lie on the dorsal body wall within the shadow of the pelvis and may be seen to project cranially when enlarged due to inflammatory disease or tumours.

The ventrodorsal view is useful to compare the thoracic and abdominal air sacs, which are prime sites for fungal granuloma formation in diseases such as aspergillosis. The heart shadow is clearly outlined on the ventrodorsal view, and forms the upper part of an hour glass shape, with the lower chamber being produced by the shadow of the liver. Some species such as the larger cockatoos may have a small heart shadow and/or a small liver shadow which may be a normal radiographic finding. The gizzard or ventriculus is often clearly seen in grit consuming birds, lying to the left of midline in the caudal coelomic region.

Evidence of fractures may be obvious as with most long bone fractures, or slightly less blatant, as with femoral head fractures.

Metabolic bone disease is common in juvenile birds that are fed inappropriate diets, and the bones most commonly affected are the long bones, especially the tibiotarsus, which may bend into a complete right angle (see Figure 15.6). 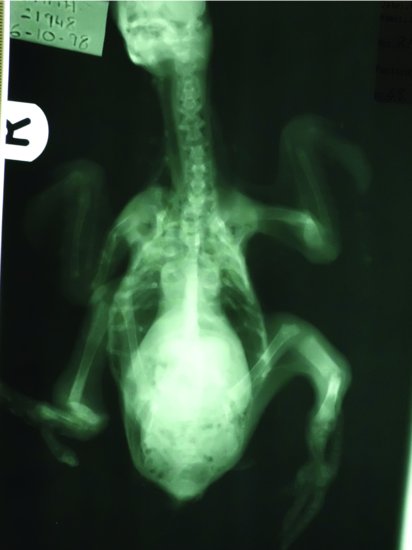 Other skeletal deformities include polyostotic hyperostosis which is often associated with cystic ovarian disease and persistent hyperoestrogenaemia, leading to a mottled appearance to the long bones.

Enlargement or reduction in size may be noted in any of the internal organs if affected by disease.

Figure 15.7 Ventrodorsal view of an Amazon parrot with hepatomegaly. Note the reduced caudal air-sac space, the reduction in the ‘waist’ of the hourglass shape of the major body organs and the increase in width of the liver shadow. 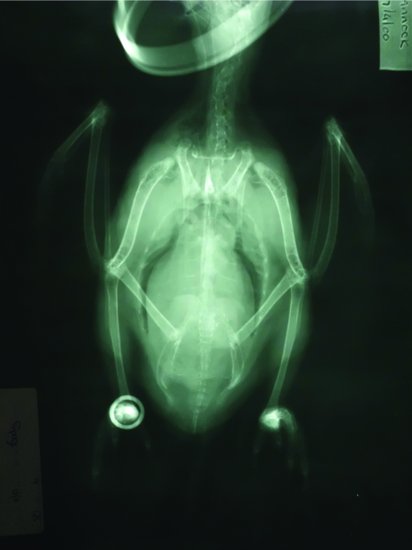