Examination of exfoliated cells from the vagina is a simple technique that is useful to monitor the progression of proestrus and estrus in dogs and cats.1-3 The vaginal epithelium undergoes a predictable hyperplastic response to increasing plasma estrogen concentrations during proestrus. Starting as only a few cell layers, the epithelium becomes 20 to 30 cell layers thick, eventually exfoliating large numbers of superficial epithelial cells during estrus. Vaginal cytology, often in tandem with hormone analysis, may provide valuable information about the stage of the ovarian cycle.4 In addition, vaginal cytology has proven useful to detect inflammatory and neoplastic conditions in the female reproductive tract.5

Cells are obtained by passing a cotton-tipped swab into the caudal vagina (Figure 25-1 and Figure 25-2). A narrow spreading speculum may be used to allow unimpeded swab passage. If no vaginal discharge is present, the swab may be moistened with sterile saline to avoid discomfort. The swab should be directed craniodorsad when entering the vaginal vault to avoid the clitoral fossa; keratinized epithelium normally present in the fossa could lead to an inappropriate cytologic interpretation (Figure 25-3).3 Once cranial to the urethral orifice, the vaginal wall is gently swabbed. The cells are then transferred to a glass slide by gently rolling the swab with minimal pressure to avoid rupturing cells. The smear is allowed to air-dry thoroughly before staining. Romanowsky-type stains typically used for blood films (Wright or modified Wright-Giemsa stains, including quick-type stains) provide good morphologic detail. 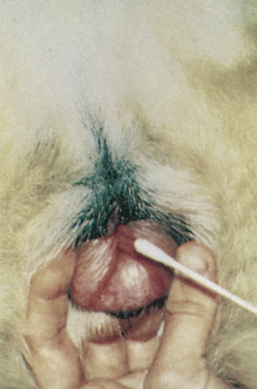 Figure 25-1 The labia are carefully parted to allow unimpeded passage of the swab. (Courtesy of Kal Kan Forum.) 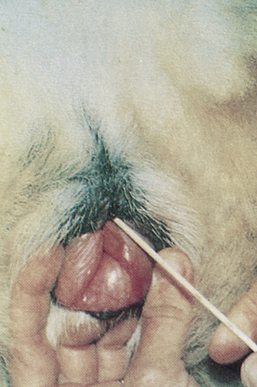 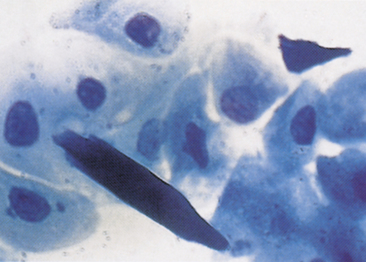 Vaginal epithelial cells are described beginning with the deepest, most immature layer near the basement membrane and progressing superficially to the most mature layer nearest the vaginal lumen (Figure 25-4). 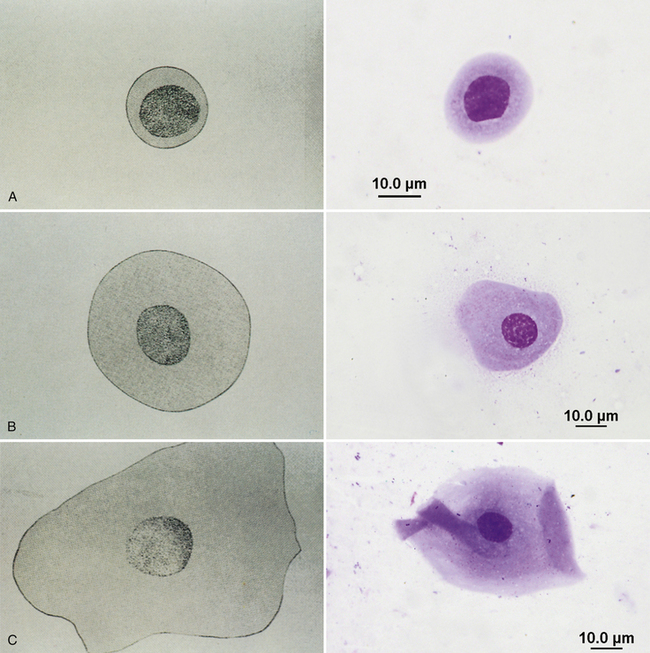 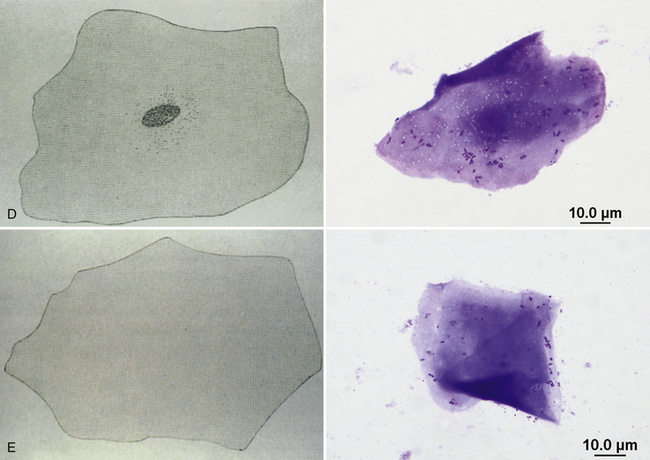 Basal cells give rise to all epithelial cell types observed in a vaginal smear. They are small cells with round nuclei and a high nucleus-to-cytoplasm (N:C) ratio and are rarely observed in vaginal smears.

Parabasal cells are small round cells with round vesiculated nuclei and a small amount of cytoplasm and are usually quite uniform in size and shape (see Figure 25-4, A). Large numbers of parabasal cells may exfoliate when the vagina of a prepubertal animal is swabbed. 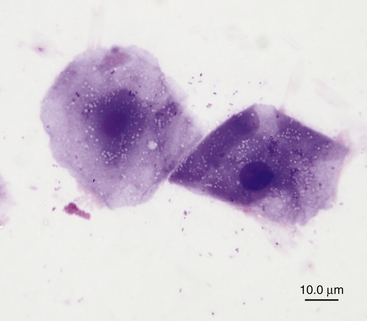 Metestrum cells have been described as vaginal epithelial cells containing neutrophils in their cytoplasm (Figure 25-6).3,6 They are not specific for any stage of the cycle and may be seen whenever neutrophils are present. 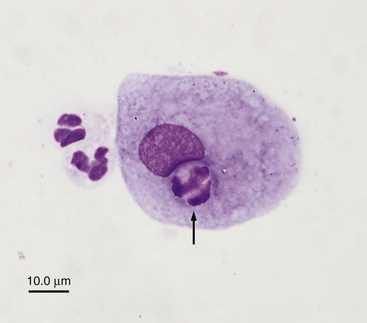 Figure 25-6 Neutrophil (arrow) within the cytoplasm of an epithelial cell.
These cells have been termed metestrum cells but may be seen at any time neutrophils are present. (Wright stain. Original magnification 1000×.)

The vagina of dogs and cats contains normal bacterial flora, and bacteria are frequently observed on vaginal cytology slides.7,8 Unless the bacteria are accompanied by large numbers of neutrophils, they are generally considered normal flora.

Spermatozoa are sometimes observed in vaginal cytologic preparations from mated bitches (Figure 25-7), but the period during which they are present varies. The presence of spermatozoa confirms a mating, but their absence does not ensure that a bitch was not bred. We have observed intact spermatozoa or sperm heads in about 65% of vaginal smears made 24 hours after a natural mating and in 50% of smears made 48 hours after mating. 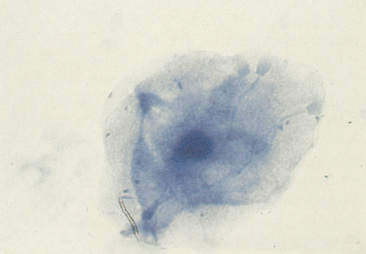 Figure 25-7 Spermatozoa and a superficial epithelial cell in a vaginal smear from a bitch several hours after mating. (Wright stain. Original magnification 400×.)

Cells that appear to be placental trophoblast-like syncytia may be occasionally observed in vaginal cytologic preparations, particularly several weeks after whelping in bitches with suspected subinvolution of placental sites (Figure 25-8).5 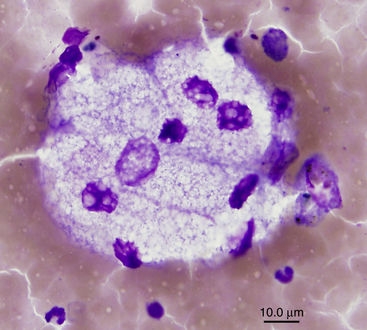 Figure 25-8 Cells consistent with placental trophoblasts in a vaginal smear from a bitch with subinvolution of placental sites after whelping. (Wright stain. Original magnification 1000×.)

Figure 25-9 provides an overview of the changes in vaginal cytology related to plasma estrogen levels during the normal canine estrous cycle.

As ovarian follicles mature and serum concentrations of estrogen (estradiol) increase, the vaginal epithelium proliferates and erythrocytes pass through uterine capillaries. These changes result in the typical appearance of vaginal cytologic preparations made during proestrus (Figure 25-10). Cytologic specimens obtained in early and mid-proestrus are characterized by a mixture of epithelial cells, including parabasal, small and large intermediates, and superficial cells (Figure 25-11), along with variable numbers of neutrophils and erythrocytes. Basophilic mucous material may be present in the background. As proestrus continues and the vaginal epithelium thickens, neutrophils are no longer able to traverse the vaginal wall, so their numbers decrease. Progressively higher percentages of large intermediate and superficial cells are present, with fewer parabasal and small intermediate cells. After serum estrogen levels peak in late proestrus, more than 80% of epithelial cells are superficial, and neutrophils are absent; this is identical to the vaginal cytology during estrus.9 Erythrocytes may be abundant or absent throughout proestrus. Bacteria, both free and on the surface of epithelial cells, are often present in large numbers (see Figure 25-14). The mean duration of proestrus in mature bitches is 9 days, although a range of 2 to 17 days is seen in normal dogs.2 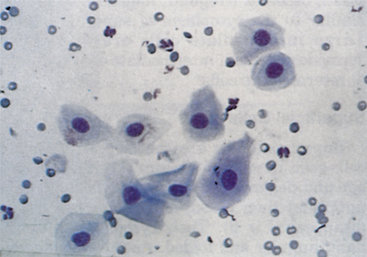 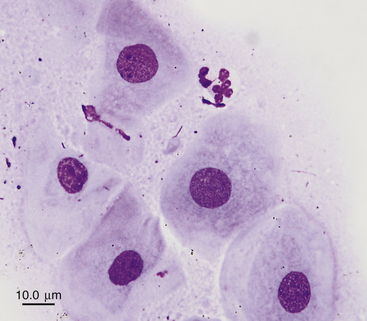 Figure 25-11 Intermediate cells and neutrophils in a vaginal smear from a dog in proestrus. (Wright stain. Original magnification 1000×.)

Most (80% to 90%) of the epithelial cells exfoliated during estrus are superficial cells. Typically, almost all these superficial cells contain small pyknotic nuclei (Figure 25-12). However, samples from some bitches contain nearly 100% anuclear cells; in other bitches, large intermediate cells are retained. Maximal cornification follows the serum estrogen peak in late proestrus and continues throughout estrus.1,9 Ovulation usually occurs about 2 days after the luteinizing hormone (LH) surge, following decreases in serum estrogen and increases in serum progesterone (Figure 25-13).2 Because maximal cornification may occur as much as 6 days before or 3 days after the LH surge, vaginal cytology is an imprecise predictor of ovulation. Cytologic preparations made during estrus usually have a clear background that is free of mucus, and may or may not contain erythrocytes. Large numbers of bacteria are commonly observed on and around superficial epithelial cells, but neutrophils are normally absent unless inflammation is present (Figure 25-14).3 The average duration of estrus is 9 days for mature bitches, but a range of 3 to 21 days has been reported.2 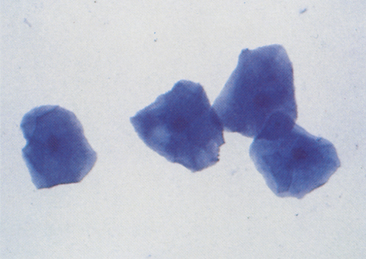