Over the past 20 years, bedside ultrasound has become an indispensible tool in the emergency department (ED). It has enabled physicians to make a rapid diagnosis at the bedside and formulate a plan of care. Perhaps most importantly, ultrasound has revolutionized procedures performed in the ED. Use of ultrasound gives the physician the advantage of viewing the anatomy and directly imaging the procedure while it is being performed. Procedures that had previously been performed “blindly” can now be performed with the added assurance of monitoring the procedure while it is in progress. This has resulted in greater safety in both common and uncommon procedures.1,2

Ultrasound is now routinely applied to procedures in the ED ranging from the common, such as incision and drainage of an abscess, to the rare, such as drainage of a pericardial effusion. Use of ultrasound to facilitate each procedure is covered in detail in individual chapters. This chapter covers the basic principles of ultrasound that can be applied to any procedure.

Ultrasound operates on the pulse echo principle. Electrical energy created by the ultrasound machine causes crystals in the tip of the transducer to vibrate, also known as the piezoelectric effect. This vibration emits high-frequency sound waves that travel into the body. The sound waves are reflected back to the transducer at varying intensities and speeds, depending on the nature of the object that it encounters. The ultrasound machine is able to interpret this information and plot an image on the screen.

Objects in the body that are liquid or water-like, such as a full bladder, reflect very few sound waves and allow most of the energy to pass through them. These objects are presented on-screen as black by ultrasound and are described as anechoic, without echoes (Fig. 66-1). Conversely, objects that are dense and have very little water content, such as bones, reflect almost all the sound waves back. These objects are presented on-screen as white by ultrasound and are described as hyperechoic (i.e., producing a lot of echoes) (Fig. 66-2). Objects that lie between these two extremes are varying shades of gray, depending on the water content of the object. For example, the liver contains a large amount of blood, a water-like substance, but is not completely liquid and appears on-screen as a dark gray (Fig. 66-3). An object that contains less water but is not completely solid would appear as a lighter shade of gray. 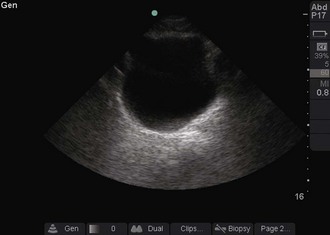 Figure 66-1 This image demonstrates a fluid-filled bladder, which appears black, or anechoic, when viewed with ultrasound. 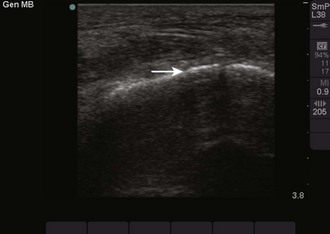 Figure 66-2 This image demonstrates the cortex of a bone (arrow), which appears white, or hyperechoic, when viewed with ultrasound. 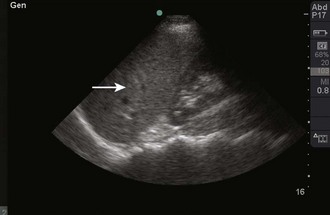 Figure 66-3 The liver (arrow) contains a large amount of blood (a water-like substance) but is not completely liquid and appears on-screen as dark gray.

These properties of objects also account for two important artifacts. Acoustic shadowing is an artifact that is encountered when dealing with hyperechoic objects. These objects reflect almost all the sound waves back to the transducer. As a result, the ultrasound machine “senses” an absence of information deep to the hyperechoic object. This absence of information is represented by a strong, dark vertical line emanating deep to the object (Fig. 66-4). This type of shadowing is referred to as a “clean shadow.” Although this shadow can be frustrating to the sonographer when attempting to obtain the best image possible, classically, when imaging over the ribs, it can also be helpful in identifying hyperechoic objects, such as gallstones or foreign bodies. 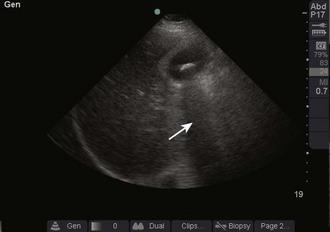 Figure 66-4 Acoustic shadowing (arrow) occurs when ultrasound encounters a hyperechoic, or hard, object. All the sound waves are returned to the transducer, which results in absence of information behind the hyperechoic object.

In contrast to a “clean shadow,” the presence of air may create a phenomenon known as “dirty shadowing” (Fig. 66-5). Air causes the ultrasound beam to scatter and creates a hazy, gray appearance on the image. This can be an anticipated finding, such as when viewing bowel gas within the abdomen, or an indication of an abnormality, such as when viewing gas within subcutaneous tissue. 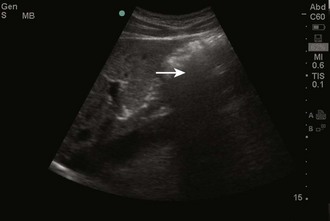 Figure 66-5 In contrast to clean shadowing, the presence of air causes a “dirty” shadow (arrow).

Acoustic enhancement, or an acoustic window, is the effect created by an anechoic object. As noted earlier, sound waves pass through anechoic objects well and therefore lose less of their energy. This enables more ultrasonic energy to be available when the sound reaches the object on the other side of the fluid. This results in a brighter, clearer image immediately behind the fluid-filled object. As an example, a full bladder enables a clearer image of the pelvic organs (Fig. 66-6). 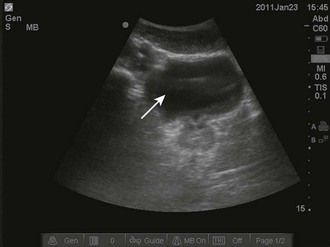 Figure 66-6 The presence of a fluid-filled object (in this case a full bladder) creates an “acoustic window” effect (arrow). This effect allows objects behind, or deep to, the window to be seen more clearly.

Although vascular access was one of the first uses of ultrasound in ED procedures, the list of procedures that can be facilitated by ultrasound is growing rapidly and continuously (Box 66-1). Even in cases in which the procedure cannot be directly observed with ultrasound, bedside ultrasound can frequently be used to diagnose the abnormality and to plan the approach for the procedure.