Stargazing and related neurologic signs in lions is a well-known syndrome. The name of the disease relates to the characteristic attitude with the lion’s head pulled backward, giving the impression that the animal is staring at the sky. It is understood that the proliferation of cranial bones with resulting compression of brain tissue, cause this clinical presentation. Recent reports have been limited to young and adolescent captive African lions (Panthera leo) and hypovitaminosis A has been proposed as the cause. There is no gender predilection. Interestingly, there are no reports in Asian lions and there are only rare historical reports of the condition in a 10-month-old tiger (Panthera tigris)6 and in leopards.8 It has to be clarified that stargazing is only one of a variety of neurologic signs of a vestibular disorder. The description is misleading and is not diagnostic for the syndrome. In most cases, stargazing was not even reported. It may also be discrete, absent, or hidden by other neurologic symptoms. Different terms are used for the same condition, such as Chiari I–like malformation or cerebellar herniation.* Arnold-Chiari malformation in humans and calves is almost always associated with spina bifida and/or a protruding meningomyelocele. These features were not found in affected lions and therefore we suggest to use the term with caution or to describe it as an Arnold-Chiari–like disorder when discussing the stargazing syndrome of lions.4

This chapter summarizes the current state of knowledge regarding pathogenesis, diagnosis, treatment, and prevention of the disease. Clinical observations and pathology are based on a recent case that we diagnosed, which is compared with relevant literature reports.

In recent cases, clinical signs were first observed in subadult lions at the age of 9 to 14 months. However, in rare cases, signs were already detected at the age of 2 months. Early detection of clinical signs is important because prognosis seems to be better at the beginning of the growing phase, when bone formation is more dynamic and may respond to therapy. Various occurrence histories have been reported in the literature, such as littermates of affected individuals that grew up normally, or whole litters affected to a higher or lesser extent, or with varying ages at the beginning. In the case that we diagnosed, the female (lion no. 1) of a litter of two was affected, with the first signs observed at the age of 12 months, whereas the male littermate (lion no. 2) grew up normally. A variety of neurologic signs, in most cases a combination of two to five signs, were reported. The signs may be summarized as the neuroanatomic expression of a peripheral or central vestibular disorder. Slow progression of the signs over weeks is a consistent feature. It is recommended to perform repeated video recording of the affected animal to allow for follow-up. This may also serve as a basis for discussion for the neurologist and helps locate the origin of the signs within the central or peripheral nervous system.

Initial signs include ataxia, lack of coordination, and difficulties in negotiating obstacles. Our first observation of signs in the affected lion was the sudden difficulty in jumping through a gate that had a 50-cm step, which connects the indoor and the outdoor enclosure. The animal fell back and it took a second attempt to cross this barrier finally. During the course of the disease, the affected animal eats and drinks normally, but takes smaller quantities, and therefore often appears smaller than other nonaffected members of the litter. Later, progressive ataxia, mild head tilt and cycling behavior (both often reported as left-sided), stargazing, nystagmus, fine head tremor, staring glare, and nonresponsiveness to new objects (neither playing nor defense behavior) are observed. At this stage, the affected lion often becomes lethargic and depressed. We observed that the ataxic signs worsened when the animal was excited, such as when the animal was separated from the group or when blow-darted. In single cases, abnormal vocalization, hypersalivation, and tongue protrusion were reported. We were able to test pupillary light reflexes, using a pocket lamp at a few centimeters’ distance through the cage bars, and obtained a normal response. Late signs of the disease include blindness, convulsions, inability to stand, rolling over, recumbency, and death.*

After careful evaluation of the clinical symptoms, the neuroanatomic localization should be investigated. It is important to plan the diagnostic procedures carefully that will be performed during general anesthesia. A complete physical and neurologic examination, including blood and cerebrospinal fluid sampling, should be performed, taking samples for virology, microbiology, and parasitology, carrying out an examination with an otoscope, and having imaging techniques prepared (radiography, ultrasound) or organized (e.g., computed tomography [CT], magnetic resonance imaging [MRI]). Several differential diagnoses have to be considered and a rule-out protocol should be determined for trauma, infection (e.g., feline coronavirus, feline immunodeficiency virus, canine distemper), otitis media and/or interna, or a space-occupying process that compromises the central nervous system (e.g., hematoma, abscess, neoplasia, pathologic bone proliferation, congenital anomaly).

For the detection of pathologic cranial bone thickening, specifically of the os tentorium cerebelli (Fig. 61-1), CT investigation is necessary. Both plain and contrast medium scans are useful. Alterations of brain tissue, such as the compression of the cerebellum, including herniation of the caudal folia through the foramen magnum occipitalis, is diagnostic for the syndrome and best visualized using sagittal MRI scans (Fig. 61-2). An objective interpretation of osseous cranial structures may be achieved by measuring the maximum diameter of the vitreous body of the eye and relating it to the thickest part of the occipital bone and os tentorium cerebelli.7 Hyperintensity of sagittal images in the spinal cord consistent with syringohydromyelia and secondary enlargement of the lateral ventricles caused by stasis of cerebrospinal fluid were additional MRI findings in recent reports.10,20 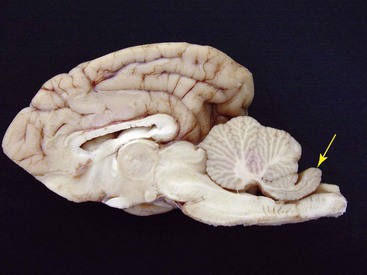 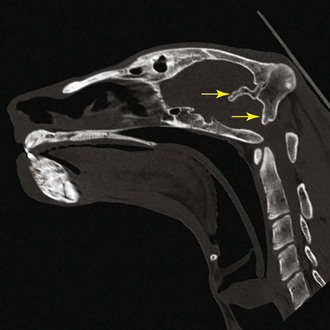 Serum Vitamin A Concentrations in Lions

The accuracy of serum vitamin A (retinol) concentration certainly is lower than the value of the concentration in the liver, which is the reservoir organ for vitamin A. However, tissue analysis is impractical for routine clinical application in zoo animals and therefore serum values may serve as controls for vitamin A status or support a diagnosis of vitamin A deficiency. Table 61-1 shows the serum retinol concentrations of an affected lion cub (lion no. 1) before and after the appearance of the first clinical signs and before and after therapeutic supplementation. The results are compared with the concentrations from nonaffected pack mates and littermates, as well as individual concentrations from subadult free-ranging lions at capture and later as adults in captivity. Finally, serum samples from subadult and adult captive lions from the same zoo and from four other institutions referenced in the literature have been summarized as mean values.5 Lion no. 1, which developed clinical signs of stargazing at the age of 12 months, showed the lowest serum retinol concentration at that time (37.4 µg/liter). This finding was confirmed by extremely low liver vitamin A values at necropsy (0.34 µg/g). Its littermate, lion no. 2, raised under identical conditions, had a serum retinol concentration (122 µg/liter) that was approximately three times higher. Therefore, an individual problem, such as a congenital deficiency of specific lipoproteins, which are needed for endogenous vitamin A transport, may be theorized. After repeated parenteral vitamin A supplementation, lion no. 1 showed only a slightly increased retinol concentration (60.1 µg/liter), which indicates that the influence of parenteral vitamin A supplementation is limited in the short term. When compared with the reference values from the same institution before 1998, all concentrations measured in the current lion pack (nos. 1 to 4, 6, and 7) were low. Concentrations of free-ranging subadult lions at capture (nos. 3 to 5), which reflected true reference values from the natural availability of whole-prey diets, were also low when compared with those concentrations at the same zoo and four other zoos. They may reflect long-term vitamin A supplementation in a captive situation. We have concluded that serum retinol concentrations below 60 µg/liter are critical for the development of stargazing in growing lions, and values higher than 90 µg/liter are adequate and should be achieved by dietary measures in captivity. 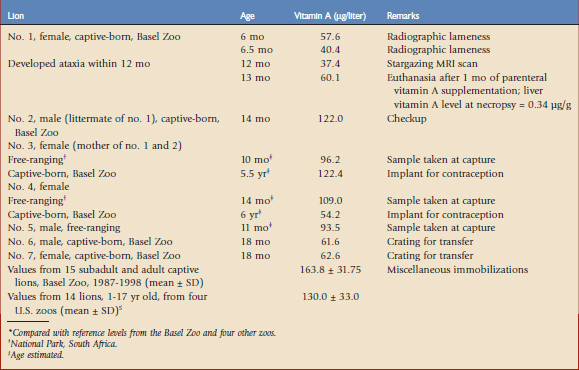