Ruminants are in the order Artiodactyla and encompass a broad array of species, including the antelope (including pronghorn), cattle, sheep, goats, giraffe, okapi, bison, buffalo, deer, and yaks. The ruminant family contains some of the most endangered species, including the hirola, or Hunter’s antelope (Beatragus hunteri), dibatag (Ammodorcas clarkei), Przewalski’s gazelle (Procapra przewalski), saiga (Saiga tatarica), and the more recently discovered saola (Pseudoryx nghetinhensis). Ruminants comprise a significant part of the collection in many zoo and wildlife institutions, and zoos have played a strong role in conserving species that are effectively extinct in the wild,27 but that have sizable populations within the zoo community, such as the addax (Addax nasomaculatus), scimitar-horned oryx (Oryx dammah), and dama gazelle (Gazella dama). Other species that were once abundant in their range countries, such as the Kenyan bongo (Tragelaphus eurycerus eurycerus), are disappearing through overhunting and habitat loss, yet do well in captivity. Elsewhere, roan (Hippotragus equinus) numbers are similarly dwindling in southern African, purportedly because of their sensitivity to habitat disturbances.

Zoos and wildlife institutions have contributed significantly to ruminant conservation strategies, including reintroductions or repatriations, such as for the scimitar-horned oryx,6 addax,2 bongo (www.rarespecies.org/africa.html), and roan (www.backtoafrica.co.za/operations_roan.html). They continue to contribute through other projects, including surveillance to estimate populations accurately for updating their International Union for Conservation of Nature (IUCN) conservation status, such as for the okapi (Okapi johnstonii).9 Ongoing requirements for ruminant conservation include the following: clarification of taxonomy questions, such as whether the Jackson’s hartebeest (Acelaphus buselaphus jacksoni) is a hybrid of the lelwel (A.b lelwel) and Coke’s hartebeest (A.b. cokei); nutrition studies on free-ranging counterparts to refine nutritional requirements in captivity, especially for browser antelope species; and basic research to elucidate species’ biology. Zoos typically manage a limited number of individuals for every species, and problems associated with negative influences on populations become magnified in such small populations.10 For a species to survive in the longer term, it is important that populations contain adequate genetic diversity to be evolutionarily flexible.11,12 In recent years, the long-term sustainability of many ruminant populations in zoos and wildlife institutions has come under threat and new founders are needed to infuse new genes into the populations.5 Because zoos actively support the concept of sustainable resources, the idea of moving frozen semen rather than translocating animals from the wild has become an attractive option. Not only would this approach create a permanent source of wild genetic material, but the ability to import new genes via frozen semen for use in artificial insemination (AI) confers the advantages of decreased disease risk (see later), decreased cost and, most importantly, enhanced animal welfare. The welfare improvements from this strategy occur because the animals would be temporarily captured for a quarantine period and for semen collection before release into the wild (or semiwild enclosures in the case of wildlife parks), rather than permanent translocation into captivity. Semen may thus be viewed as a sustainable resource.

For all these conservation strategies and research, biological samples such as feces, rumen contents, and frozen semen are imperative. However, importation of unfixed or untreated (effectively viable) ruminant samples into the United States is extremely difficult and, in the case of frozen semen, has yet to be achieved in nondomestic ruminants.

Because ruminants are in the Bovidae family, assisted reproductive techniques such as AI may be modified from techniques developed for domestic cattle. Because of the importance of the livestock industry in most countries, extensive research has been directed at developing techniques to maximize production, including the use of AI, which is widely used in the cattle and dairy industry. Such developments have proven advantageous to nondomestic ruminants because similar techniques may basically be applied and refined.

Ruminants represent the largest group of non-domestic animals to have been produced by AI, with offspring produced for seven antelope, seven cervid, two wild cattle, one caprid, and one ovid species14 (Table 78-1). Artificial insemination of females with frozen-thawed rather than fresh sperm has resulted in pregnancies in most of these species. Although a significant amount of work is generally required to develop these techniques in each new species, the use of frozen-thawed sperm in conjunction with AI still represents a pragmatic option for infusing new genetic material into ex situ ruminant populations, both within and among countries. Importation of frozen semen for use in AI may enable animal managers to maintain or increase genetic diversity in captive populations of nondomestic ruminants. Organized sperm banks function as valuable repositories of genetic material that may be used long after the death of the semen donor, and therefore should be considered an important component of conservation efforts for nondomestic ruminants, particularly in view of dwindling numbers of many species in the wild. However, this approach is constrained by the very feature that facilitated the development of semen freezing and AI methods in the first place—the close relatedness of nondomestic bovidae to their domesticated counterparts means that nondomestic ruminants are susceptible to the same group of diseases that might threaten the livestock industry. Consequently, semen and other biologic samples from nondomestic ruminants present similar disease risks to agricultural industries and to zoological populations, and severe restrictions on sample transport and use exist. The full potential of AI as a means of managing the genetic diversity of captive populations will not be realized until regulatory processes for frozen semen importation are clarified and semen can be moved internationally. 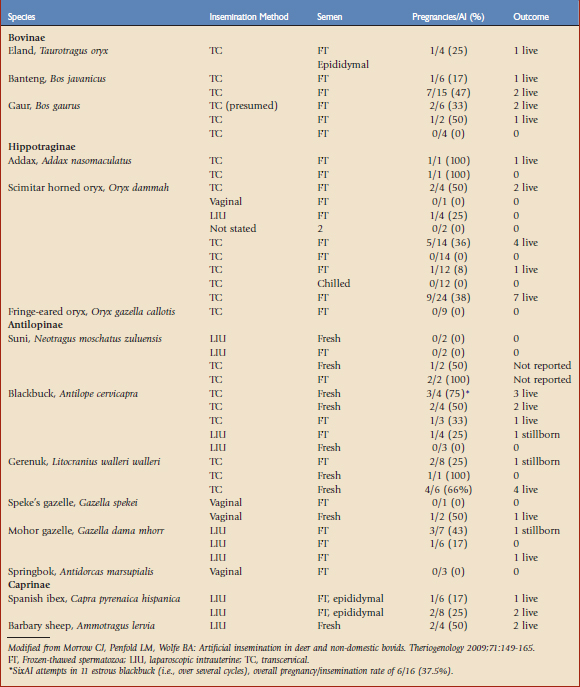 The inadvertent importation of a foreign animal disease has serious implications for endangered species. Organisms that may be relatively harmless in their host and host country may wreak havoc in naïve species. For example, the relatively benign herpesvirus of the African elephant (Loxodonta Africana) is fatal in Asian elephants (Elephas maximus),19 and the Great African rinderpest epizootic of the 1890s demonstrated the devastating effects that an introduced disease could have on wildlife species. Thought to have been introduced into Africa by domestic cattle imports from either India or Arabia, rinderpest decimated ruminant populations, reducing species such as roan and sable to small metapopulations.1

Rinderpest is a highly contagious disease, with spectacularly high mortality rates, rendering it a formidable disease for economic and social reasons. An extraordinary amount of historical information is available for this epizootic disease, with accounts throughout the centuries starting as early as 376 ad.1 An African pandemic in 1895 decimated ruminant populations, with antelope being extremely susceptible. High numbers of waterbuck, kudu, giraffe, and wildebeest succumbed during this pandemic.

Many foreign animal diseases of concern to the agricultural industry in the United States and other nations may be carried in nondomestic ruminant biologic samples (Table 78-2).7 These diseases may be virulent, with high morbidity, such as Rift valley fever, and/or economically devastating, such as foot-and-mouth disease (FMD) and bovine spongiform encephalopathy (BSE).

However, FMD is without question the most contagious animal virus disease21 and has long been recognized as a disease transmissible by AI.3 Endemic to all continents except Australia and North America, it is also one of the most economically important of the animal diseases because of its potential impact on international trade. There are seven serotypes of FMD—O, A, C, Asia1, SAT1, SAT2, SAT3—and as few as 10 to 25 virus particles may be sufficient for disease transfer. Therefore, the emerging technique for semen washing may not be effective for FMD, although it is effective for HIV-1 and hepatitis C,13 because the washing technique has the advantage of dramatically reducing the virus load but may not eliminate the virus completely from the semen.

Although an FMD vaccine is available, countries are reluctant to use it to avoid losing FMD-free status for trade. The main problem with the vaccine is not that vaccinated animals cannot be distinguished from infected animals, but that there is a risk that vaccinated animals that come into contact with live virus may become carriers.8,22 Buffalo (Syncerus caffer) are notorious as carriers of FMD, although it is unclear whether antelope may act as carriers for the virus. Bluetongue was probably present on the African continent for centuries but, in 1943, the virus spread to Cyprus, followed by the United States, Europe, Asia, and Australia. Many hoofstock species have titers for bluetongue, especially those in warm climates in which biting flies are abundant. There are multiple strains of bluetongue, which is noncontagious but transmitted by biting midges (Culicoides imicola). Bluetongue is rarely clinically expressed in hoofstock but sheep are susceptible, with high fetal and neonatal mortality rates. For imports, polymerase chain reaction (PCR) testing, following positive serology testing, is sophisticated enough to identify individual strains, thus preventing importation of a strain not already present in the country.