Many of the more docile reptiles will remain motionless for long enough to take dorsoventral radiographs without the need for chemical restraint. The use of perspex or even cardboard boxes to constrain the reptile, particularly if they are some of the smaller lizards such as anoles and day geckos, is very useful, although minor reduction in the quality of the radiographs will occur.

Chelonians may be easily positioned for horizontal beam radiography in the conscious state by balancing the mid part of the plastron on a block or small pile of upturned feeding bowls so as to lift all four feet off the ground!!

Snakes may be constrained manually or encouraged to crawl into a perspex or plastic tube, such as can be made from syringe cases taped together. This has two advantages. One is that the snake is adequately restrained enough to allow the handler to leave the snake whilst the radiograph is being taken. The second is that it ensures the snake is stretched out and avoids the confusion of interpretation which occurs in the coiled individual.

Lizards such as the green iguana (Iguana iguana) may present more difficulty to restrain physically. However, many will quieten down when placed into a dimmed environment. Alternatively, the use of a heavy towel to restrain the iguana initially, long enough to gently close the eyelids and apply firm but careful pressure to the eyeballs through the eyelids, can be employed. This may be maintained manually, or replaced by a ball of cotton wool over each eyelid and the whole wrapped in an elasticated bandage to keep the pressure on. This process is known as the vagovagal reflex as the pressure on the eyeballs stimulates the vagus nerve and consequently leads to the reduction in respiration rate and heart rate, so creating a semi-sedated condition. This is sufficient to allow the iguana to be placed in lateral recumbency for limb radiographs, etc., without the need for chemical restraint. However, as soon as a loud noise or other form of stimulation occurs, the effect is abolished and the iguana becomes alert again.

This may be necessary for very aggressive species or poisonous ones. There are many combinations of sedatives and anaesthetic regimes available to practitioners, and it is impossible to go into them all at this time. However, some of the more commonly used methods in this author’s practice are as follows.

As with small mammals, the need is to obtain a three-dimensional view of the area under investigation. To obtain this the traditional two views at right angles to each other are required.

However, although a dorsoventral view is performed as for a small mammal patient, a lateral view is often better performed in the standing patient as mentioned above. This is due to the anatomy of the average reptile patient, which does not possess a diaphragm separating the lung fields from the gastrointestinal system, so creating a common cavity or coelom. Thus, if placed in lateral recumbency, the gut contents will fall dorsally and obliterate the lung field, making radiographic evaluation impossible. Instead, if the x-ray machine (and local safety protocols) will allow, the head of the machine should be moved to fire x-rays horizontally, so allowing the reptile to be imaged standing upright. This is also extremely useful in cases of coelomic fluid effusion where fluid lines become readily apparent.

In chelonia, an additional third view is recommended. This is the craniocaudal view, again utilising the horizontal beam x-ray. This view allows comparison of the right and left lung fields, which are situated in the dorsal aspect of the shell, and is useful for diagnosing one-sided lesions such as granulomas or focal pneumonias (Figure 23.2).

Figure 23.2 Craniocaudal horizontal beam radiographs are an additional useful view to compare the right and left lung fields in chelonians. Note that the tortoise is restrained by placing it on a pedestal so its feet are clear off the ground. 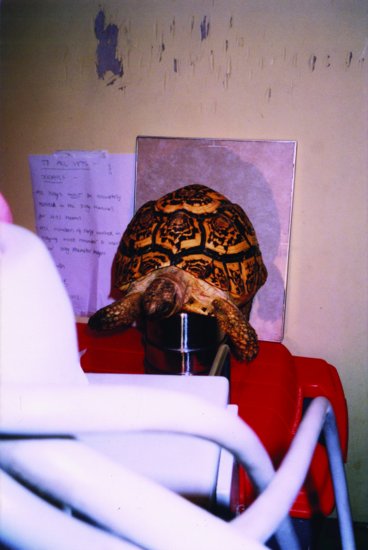 In snakes, it is advised that the snake be extended in form before radiography is performed, as the traditional coiled-up view of a snake makes for poor interpretation of internal organs and the position of lesions (Figure 23.3).

Figure 23.3 Right lateral view of a boa constrictor. Snakes do not have to undergo horizontal beam radiography due to the fascia which holds body organs in place no matter what the snake’s orientation. Note the paired ribs along the whole body, the prominent lung and air sacs surrounding the heart shadow to the left of the radiograph. As the lung moves caudally the radio-dense stomach and liver can be seen ventral to it.

The use of barium sulphate is useful for positive contrast radiography of the gastrointestinal tract in all reptiles.

The use of 5–7 mL of a 25–30% solution of barium, administered by stomach tube, is useful for most Mediterranean tortoise species. Stomach emptying time may take up to a day, and the gut transit time from mouth to cloaca may take nearly a month! Barium studies are especially useful in chelonians due to the lack of detail encountered on plain radiographs.

As for chelonia. Transit times are faster, particularly in insectivorous species such as geckos, and may take 24–36 hours if kept at optimal temperatures. Useful for highlighting foreign intestinal bodies in iguanas.

As for chelonia, with doses of barium at 5 mL/kg, although transit times are much faster with gastric emptying occurring in 2–3 hours and full transit time taking 4–7 days. Air may be injected into the stomach immediately after barium to create a positive contrast technique – useful when examining thickening of the stomach wall as is found with some tumours, cryptosporidiosis and abscesses.

Useful where minimal irritation is required, such as when gut/intestinal surgery may be planned shortly after using positive contrast techniques.

Transit times are faster with stomach emptying occurring in 1.5–4 hours and full gut transit time taking 3–8 hours at 21°C. A positive contrast urocystogram may be seen some 8–10 hours after oral administration as the aqueous iodine is absorbed and excreted through the kidneys.

Intravenous techniques have been used to determine blood flow through the kidneys and may be used to assess the cardiovascular system. Doses of 0.5–1 mL/kg intravenously have been used.

As for chelonia, although gut transit times are even faster, with stomach emptying occurring within 30–45 minutes.

It is difficult to view many of chelonians’ internal organs due to the density of their shell. However, the heart and liver may be seen on lateral views using horizontal beam radiography, and the liver shadow may be enhanced by the use of positive contrast studies and lies in a dumb-bell shape across midline in the caudal part of the cranial half of the chelonian.

Metabolic bone disease (MBD) will cause deformities of the carapace and lucencies in the pelvis and pectoral girdle. Over-supplementation with vitamin D3 and calcium may lead to renal and cardiovascular mineralisation. Bladder stones and gravidity are most easily seen in dorsoventral radiographs.

Figure 23.4 Dorsoventral view of a female gravid spur-thighed tortoise (Testudo graeca) showing the outlines of seven eggs. Note the radiolucent line across the plastron which is the plastral ‘hinge’ typical of this species which facilitates oviposition. 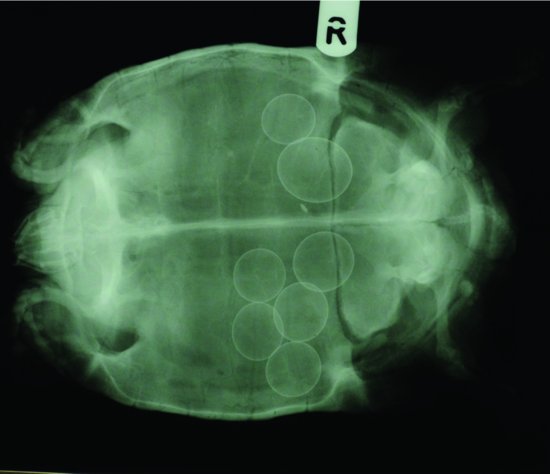 Figure 23.5 Horizontal beam lateral view of the tortoise in Figure 23.4. Note the dorsally situated lungs. The eggs are more difficult to see in this view as they are masked by the intestinal mass. 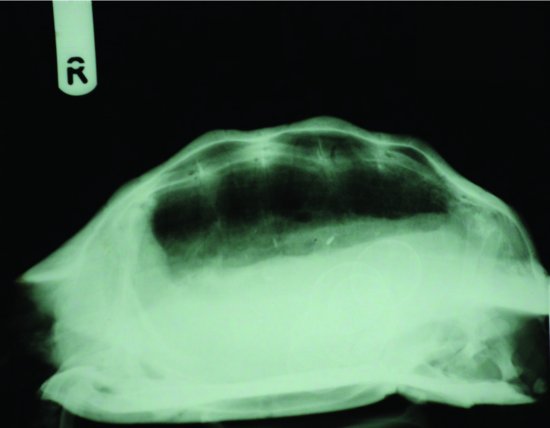 Figure 23.6 Horizontal beam craniocaudal view of the tortoise in Figure 23.4. This view is useful for comparing the left and right lung fields to pinpoint a lesion. 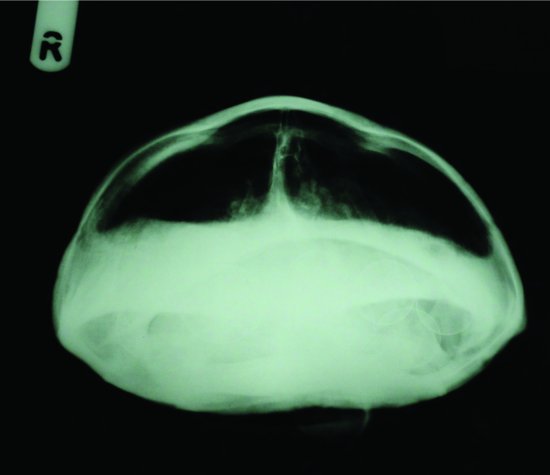 Radiography may, of course, also be used to assess whether intraosseous catheters are correctly sited (Figure 23.7).

Figure 23.7 Dorsoventral view of a spur-thighed tortoise (Testudo graeca) showing the correct placement of an intraosseous catheter in the distal right femur. 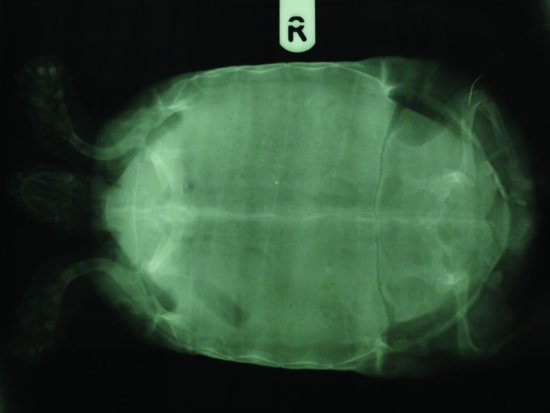