Amoebic gill disease (AGD) is attributed to colonization by Paramoeba perurans and of global significance to the aquaculture industry. Neoparamoeba has recently been reclassified to Paramoeba. Infestation is associated with a severe gill proliferative response and consequently, significant mortalities can occur in Atlantic salmon reared in sea water. AGD outbreaks normally occur from late summer to early winter with 10–12 °C believed to be the threshold for clinical signs. However, outbreaks have occurred at lower temperatures and recent studies show high salinity as a more relevant risk factor. The amoeba is usually confined to the gill surface but can penetrate the epithelium and occur internally. Heavily infected fish are lethargic and congregate at the water surface. The opercula are flared with excessive mucous from the gills and the presence of focal, whitish patches (Fig. 8.1). Fresh preparations of amoebae removed from infected gills show large distinct pseudopodia, a well-delineated hyaloplasm and measure approximately 15–40 μm. High salinity (low rainfall), warmer temperatures, suspended organic matter, cage fouling, high stocking densities and previous gill damage, have also been reported as risk factors. 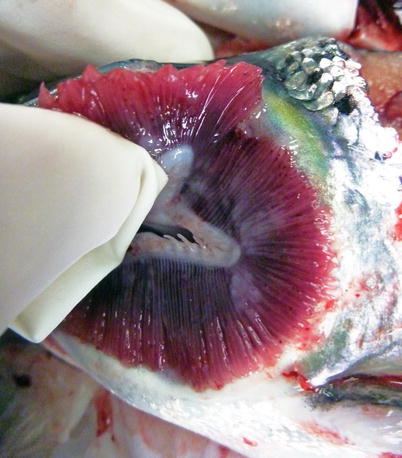 Amoebic gill disease in seawater-farmed Atlantic salmon. Note pale gills and nodular, slimy patches
Primary attachment by amoeba is associated with branchial irritation and localized host cellular alterations including squamation-stratification of the epithelium (Fig. 8.2). This is followed by epithelial hypertrophy and stratification of epithelia at lesion surfaces, with recruitment of mucous cells to affected areas, reduced chloride cells and the formation of large interlamellar lacunae or vesicles. Small to medium sized lacunae may contain amoeba, whereas larger lacunae are generally clear of any cellular debris (Fig. 8.3). Very similar gill lesions associated with amoeba infections on brook trout reared in freshwater, have also been reported (Fig. 8.4). Proactive treatment by freshwater bathing is carried out when gross gill assessment (i.e. a gill score) indicates a moderate level of infestation in a population. However, re-infections have been reported at 2 weeks post bathing. During the post-bath period, non-AGD lesions including haemorrhage, necrosis and regenerative hyperplasia have been observed. 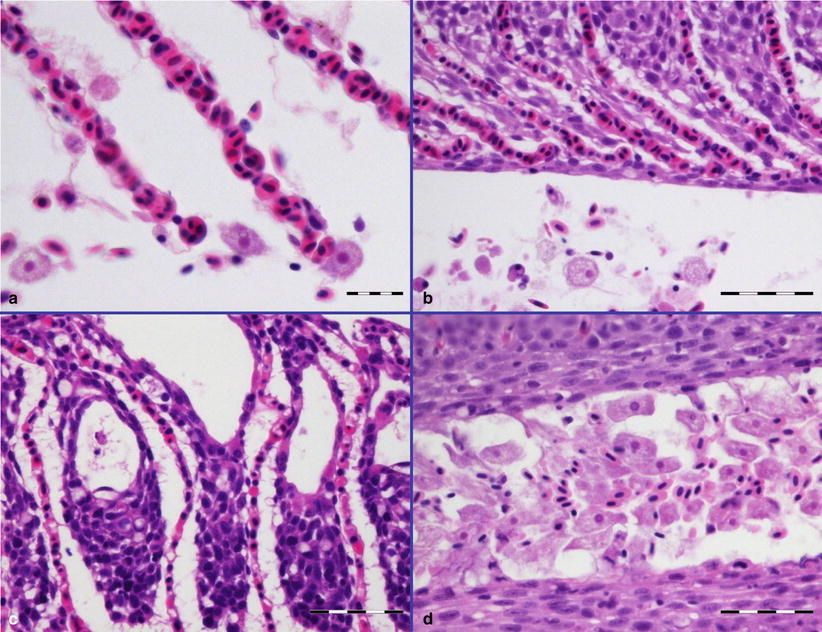 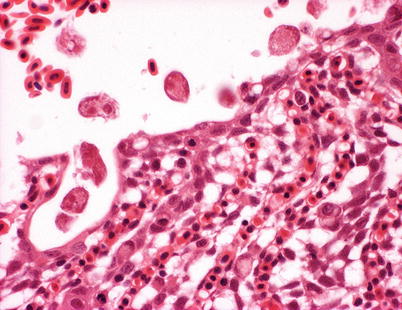 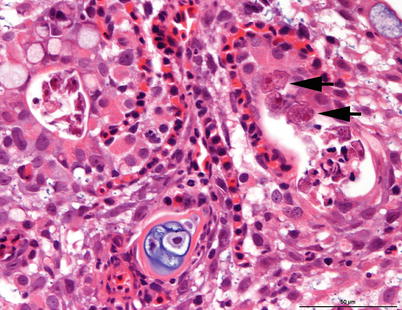 Capriniana (previously known as Trichophrya), is an ectocommensal organism that commonly occurs on the gills of several fresh water fish species. The shape of the parasite is variable but generally, it is sac-like (50–100 μm), elongated structure with 10–35 tentacles projecting from the cytoplasm opposite to the site of attachment (Fig. 8.5). The body adheres to the lamellae through a flattened attachment surface, termed the scopuloid. C. piscium feeds on free living cells and is not considered pathogenic to fish. However, where this ciliate occurs in large numbers, they can impede water flow and oxygen uptake by the gills and cause some irritation to the mucous membranes. Diagnosis is made by microscopic examination of smears from the skin and gills of live fish although they can also be observed during histological examination. 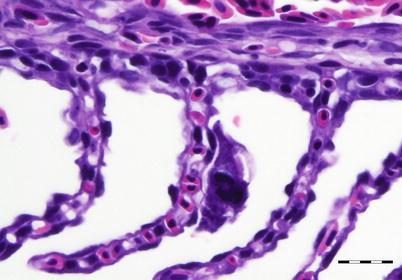 This cosmopolitan, holotrich, ectoparasite is a serious pathogen on the gills and skin of several fish species in fresh and brackish water in North and South America, Europe and Japan. This parasite is a problem among wild fish and hatchery-reared salmonids, although mortality is particularly evident in cases where farm husbandry is poor.
This flattened ovoid to pear shaped parasite is up to 70 μm in length with an indentation at the posterior margin, and its surface is fully covered by rows of cilia. Live C. piscicola can be seen moving in a gliding manner over the epithelial surface on which it feeds, resulting in significant damage. Under certain conditions the parasite may encyst and remain viable for long periods. Clinical signs include increased mucus, hypoxia and reduced growth. Typical gill lesions include hyperplasia, necrosis and impaired gill function, followed by infiltration of eosinophilic granulocytes. Respiratory failure due to diffuse hyperplasia and inflammation is considered to be the primary cause of fish mortality. Diagnosis is based on the identification of the characteristic ciliate from fresh skin and gill smears (Fig. 8.6) and can be completed with histological examination. 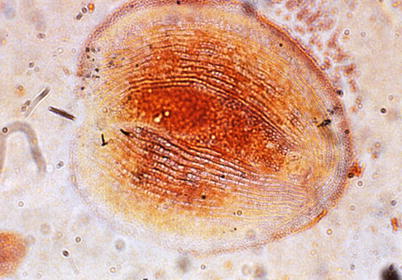 Ichthyophthirius multifiliis, ‘white spot disease’ or ‘ich’, is one of the most frequently encountered ciliates, principally of farmed fish. The geographical distribution of the parasite is widespread and almost all fish in fresh water can be considered susceptible with observations indicating that parasitism affects the growth of the host.
Numerous small white spots, less than 0.5 mm in diameter, are visible on the body surface of affected fish including the gill and the lining of the oral cavity (Fig. 8.7). Clinically, fish show frayed fins, dark colouration, increased mucous and rapid respiration. Internally, splenomegaly and pale mottled liver may be observed.

Rainbow trout heavily infested with Ichthyophthirius multifilis. The fish is dark in colour
Mature I. multifiliis are round to oval in shape with short cilia covering the entire surface. I. multifiliis has a rapid developing life cycle that includes the feeding and growing attached phase observed in the fish, the ‘throphonts’, which occur under the skin or gill epithelium and visible as ‘white spots’. As they reach maturity e.g. in the gills (Fig. 8.8), or under the host skin just beneath the epidermis, they eventually emerge breaking through the cysts as a free-living form, a ‘pro tromont’, and usually sink to the bottom or substrate, but a sticky capsule also allows them to attach to surfaces as plants or nets. The cycle continues with an encapsulated dividing stage or cyst formation while at the bottom of the tank or natural substrate. The ‘tomont’ multiplication is temperature mediated, giving raise to thousands of new individuals, the ‘tomites’. These break the cyst and become free swimming pear-shaped infecting forms, ‘theronts’, that have to reach a new host within a limited time period of ~2–4 days. Theronts penetrate the host skin becoming ‘throphozoites’, which will grow again into throphonts. This can be seen constantly turning and moving under the skin, feeding on the dead cells and fluids produced by their own action. 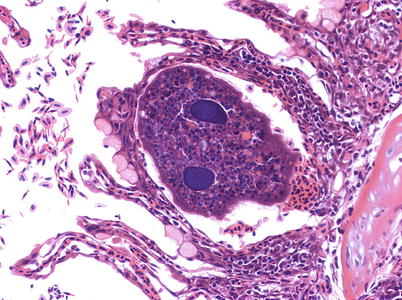 Ichthyophthirius multifilis lodged between two fused lamellae in rainbow trout. Medium power
Histologically, I. multifiliis has a macronucleus and cilia that are readily recognised. The parasites can be observed within an interstitial space just adjacent to the basement membrane. The trophont growth will gradually lift and displace the epithelial cell layers causing these cells to become hydropic and vacuolated, with resulting necrosis. As the parasite emerges through the skin the epidermis shows erosion with subsequent dermatitis, desquamation and hyperplasia, with the likelihood of a secondary infection. In the gill, lamellar hyperplasia with reduction in the interlamellar spaces is observed, which become enclosed by the proliferation of epithelium and surrounded by congested tissue, diffuse lymphocytic infiltration and oedema, associated with the peripheral layer.
Diagnosis can be carried out by examining wet mounts from gill, tail, fins or the body surface, and the demonstration of a large (200–800 μm) ciliated trophont with a characteristic horseshoe-shaped macronucleus which is considered a pathognomonic feature.
Infection induces a protective immune response in rainbow trout survivors and a similar protection can be conferred by intra peritoneal injection of live theronts, but overall, there has only been limited progress with a vaccine.

Trichodinids are widespread, peritrichous ciliates typically found on the gills, skin and fins of fish. Sometimes they can also be found in the lateral line canal and within the urogenital system. Most species within the genus have a direct life cycle and are ectozoic commensals where the fish acts as substrate for attachment, but some species are primary pathogens on the gills and body surface of fresh water and marine fish. T. truttae is considered to be specific for salmonid fish and reported from juvenile coho salmon in British Columbia and chum salmon fry in Japan.
Trichodinids usually feed on suspended bacteria and when loads are high, it provide abundant food availability and the parasite proliferates. Therefore when trichodinids become a problem under farming conditions, this often indicates poor water quality and an eutrophication issue.
Fish with severe infections show signs of listlessness, erratic swimming and inappetence, a greenish sheen to the body, loosened scales and osmoregulatory difficulty. The parasite is mobile and does not attach permanently, but irritation of the gill lamellae can cause respiratory distress associated with excessive mucous. Histologically, mild hyperplasia and epithelial sloughing is observed. The differential diagnosis would be problems with water quality
Trichodinids are round and disc shaped parasites (Figs. 8.9 and 8.10). T. truttae is distinguished from other fresh water species by its large body diameter of 114–179 μm, as well as the presence of radial ridges on the oral surface and two markedly different lengths of cilia. The oral-aboral axis is shortened with a prominent basal disc (usually at the aboral pole). 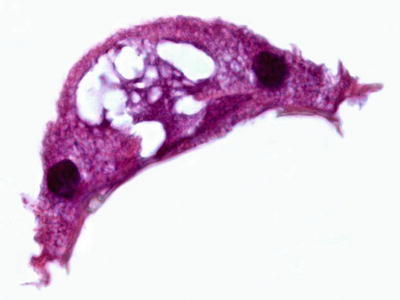 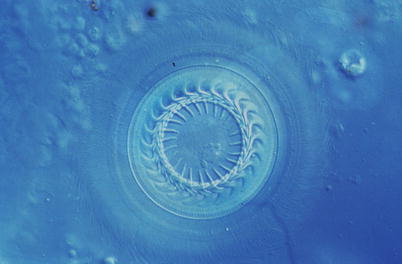 Aboral view of Trichodina sp. Normarski interference contrast. High power
Diagnosis is achieved by examining wet mounts from gill or the body surface, with demonstration of a cup or dome shaped organisms that move in a characteristic circular manner with a spiral of oral cilia at the anterior pole. The diagnosis of trichodinids can be completed with histological sections and morphology of the denticles in the adhesive discs.

Scyphidia, Riboscyphidia and Ambiphyra are considered as synonyms, although there is little consensus about their ‘correct’ taxonomical status. These ectocommensal organisms are sessile peritrichs and their occurrence on freshwater fish can result in small wounds through the release of ‘protein enzymes’, opening areas for bacterial infection. Mortality has been associated with chronic infections of the gills by Ambiphyra, inducing mechanical blockage of the respiratory epithelium. Diagnosis is dependent upon identification from skin or gill scrapings or histopathology (Fig. 8.11). 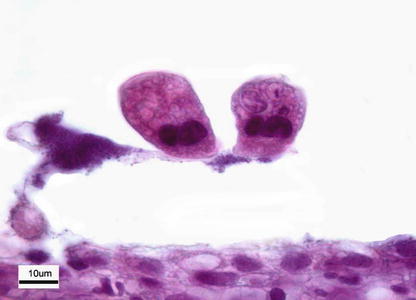 Ichthyophonus hoferi causes a granulomatous systemic disease primarily in marine fish, with several well reported epizootics occurring in wildfish including rainbow trout and Chinook salmon. Farmed salmonids are susceptible to infection resulting in poor growth rates. Clinical signs and pathology vary, but largely dependent upon the organs affected and the degree of infection. Behavioural anomalies, including lethargy and uncoordinated swimming movements, have been reported in salmon, particularly, where infection is located in the central nervous system.
Only gold members can continue reading. Log In or Register to continue