Peritonitis in cats is a serious problem that can often prove fatal. Mild or non-specific clinical signs can delay definitive diagnosis and treatment. Therefore awareness of the possibility of peritonitis, careful examination, and appropriate diagnostic tests are necessary for a timely diagnosis. Even with prompt and aggressive treatment the prognosis for survival is still guarded.

The majority of the peritoneum behaves as a semi-permeable membrane allowing bidirectional diffusion of water and solutes. A small amount of serous fluid, formed by the action of Starling forces across the peritoneal capillaries, is normally present in the space between the parietal and visceral peritoneal surfaces. The fluid has a low protein concentration (<3 g/dL protein) and resembles an ultrafiltrate of plasma. In humans, normal peritoneal fluid has antibacterial activity against Gram positive and Gram negative bacteria.4 A normal peritoneal cavity contains approximately 300 cells/mm3, which are largely lymphocytes and macrophages.

Local defense mechanisms of the peritoneum

The inflammatory response within the peritoneal cavity and the associated increased peritoneal vascular permeability result in the effusion of a large volume of protein-rich fluid into the peritoneal space. This results in a substantial loss of intravascular volume. In addition, systemic activation of the inflammatory and coagulation cascades causes further loss of fluid and protein and often disregulation of vascular tone and decreased tissue perfusion.19

Systemically, macrophages and other cells in the immune system respond to endotoxin and other bacteria-derived molecules (‘pathogen-associated molecular patterns’ or PAMPS) and endogenous mediators released from dead or dying cells20 through Toll-like receptors to initiate a complex systemic inflammatory response (SIRS). The SIRS response is referred to as ‘sepsis’ when initiated by bacteria. Binding of endotoxin from Gram negative bacteria to the lipopolysaccharide (LPS)-binding protein on macrophages stimulates the release of multiple cytokines.21 The mechanisms by which Gram positive bacteria induce systemic inflammation are less well characterized but several substances they contain, including peptidoglycan, teichoic acid, and their polysaccharide-hyaluronic acid capsules have pro-inflammatory effects, including the production of cytokines (tumor necrosis factor [TNF], interleukin-1 [IL1]) and nitric oxide.22,23

The macrophage is the main cell initiating the systemic response to bacteria and proteins from damaged cells.19 IL1 and TNFα are rapidly released after macrophage stimulation and promote activation of many of the inflammatory and coagulation cascades. A detailed discussion of cytokines involved in sepsis is beyond the scope of this chapter and the reader is referred elsewhere for a more detailed review.19

The net result of sepsis in peritonitis is a decrease in intravascular volume, decreased cardiac output as a result of decreased preload, abnormal vascular tone, and vascular thrombosis, leading to maldistribution of blood flow, poor tissue perfusion, and organ damage. For more information on shock and SIRS the reader is referred to Chapter 3.

The gastrointestinal tract is the most frequent source of peritoneal contamination in cats.24 Usually, only two or three bacterial species are grown in culture, although numerous species of bacteria are found in the gastrointestinal tract. Polymicrobial infections present a significant problem because of bacterial synergism. This appears to be most important in mixed infections with Gram negative and anaerobic bacteria. Anaerobic bacteria alone (such as Bacillus fragilis) seem to cause minimal pathology in experimental models. However, when combined with Gram negative enteric bacteria, the resulting infection is considerably more severe.25 Ingesta, exfoliated cells, blood, gastric mucin, and bile salts are adjuvant substances that worsen peritonitis. Blood is an excellent growth medium for bacteria and hemoglobin interferes with chemotaxis and phagocytosis. Bile salts destroy peritoneal mesothelial cells and inhibit neutrophil function.

Uroperitoneum occurs when the bladder or peritoneal urethra is damaged by external or iatrogenic trauma. Severe trauma to the kidneys or ureters often damages the peritoneum, allowing urine to leak into the abdominal cavity from the retroperitoneal space. Urine is hyperosmotic and pulls fluid from the vascular space into the peritoneal cavity, resulting in dehydration. Failure to excrete urine also causes acidosis and progressively worsening hyperkalemia. Severe hyperkalemia is truly life threatening. For the effects and treatment of hyperkalemia see Chapters 1 and 3.

On physical examination, pertinent findings in cats with peritonitis tend to be associated with dehydration and shock, and can include depressed mentation, inadequate hydration, pale mucus membranes, tachypnea, tachycardia, weakness, hyperthermia, and poor nutritional condition.26–28 Cats with peritonitis and sepsis are often bradycardic and/or hypothermic.26–28 Abdominal distension, which has been reported to be a common finding in cats with peritoneal effusion, can be identified by owners or on palpation during physical examination.29

Survey abdominal radiographs are often taken to evaluate cats with clinical signs of gastrointestinal, urinary, or non-specific abdominal disease. The presence of free abdominal gas with no history of recent abdominal surgery or penetrating trauma warrants immediate stabilization and surgical exploration (Fig. 26-2).32 It can be difficult to definitively diagnose small volumes of free peritoneal gas; close attention should be given to the diaphragmatic crura, as they are often highlighted by gas in the lung cranially and in the peritoneal cavity caudally. Loss of serosal detail and ileus also suggest intraperitoneal disease. Plain abdominal radiography may also diagnose diseases underlying peritonitis, including gastrointestinal foreign bodies, pyometra, cholelithiasis, and abdominal neoplasia.

Abdominal ultrasonography (Fig. 26-3) is very useful for obtaining samples of free peritoneal fluid. Blind, four quadrant tapping and diagnostic peritoneal lavage have been described for the same purpose. Although these three techniques have not been rigorously compared, ultrasound-guided aspiration has a subjectively higher diagnostic yield than a four quadrant tap and allows fluid to be directly analyzed without the dilutional effect of diagnostic peritoneal lavage. The hair over the abdomen is clipped and prepared with aseptic technique. A fluid accumulation is located with ultrasound and aspirated using a syringe and needle. The fluid’s pH, glucose, lactate, and cytology are evaluated (Table 26-2).33 Ultrasonography can also evaluate the abdominal organs for masses and abscesses and evaluate the urinary and biliary systems. 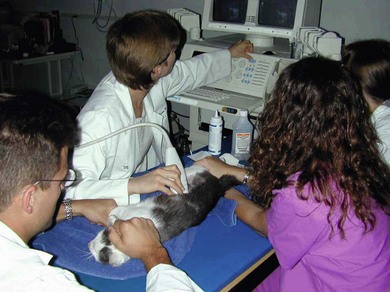 Cytological analysis has traditionally been used to evaluate peritoneal fluid (Table 26-2). Septic peritoneal effusions generally contain degenerate neutrophils and macrophages. The presence of intracellular bacteria is diagnostic for septic peritonitis.34 A comparison of peritoneal fluid and peripheral blood lactate and glucose concentrations is also useful for confirming the diagnosis of septic peritonitis. Bile peritonitis is diagnosed based on cytological and biochemical analysis of peritoneal fluid. The diagnosis of uroperitoneum is based on a history of either blunt abdominal trauma, recent catheterization, or recent expression of the bladder. In the majority of cats with uroperitoneum, the peritoneal fluid creatinine and potassium levels are higher than those in the serum (see Chapter 3).35

Surgical diseases of the peritoneum 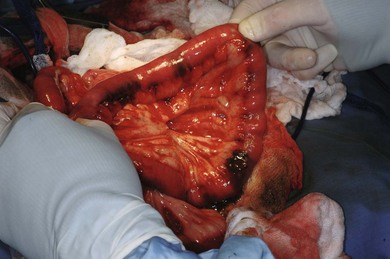 Leakage from an enterotomy, gastrotomy, or a resection and anastomosis site is another potential cause of secondary peritonitis.54,55 Dehiscence occurred in 14% of cases in one study of dogs and cats, although none of the 25 cats had surgical dehiscence and leakage.55 It is difficult to interpret the significance of these findings due to the limited numbers of cases in this study specifically evaluating cats. In a second study, no anastomosis or biopsy site leaked in 70 cats with alimentary lymphosarcoma.56 In dogs, factors suggesting an increase in the risk of postoperative dehiscence include presence of a foreign body or a traumatic injury, preoperative peritonitis, and hypoalbuminemia.54,55 Perforation of a gastrointestinal ulcer, perhaps associated with carprofen ingestion, has been reported in one cat with peritonitis.57

Secondary septic peritonitis can also occur because of biliary leakage resulting from trauma anywhere along the biliary tract, necrotizing cholecystitis, cholelithiasis, or iatrogenic injury from aspiration or surgical manipulation.24,60–63 In dogs, it appears that animals with septic bile peritonitis had a decreased survival rate and increased mortality as compared to those with aseptic peritonitis.60,63