An exhaustive discussion of the peripheral nervous system (PNS) abnormalities that affect dogs and cats is beyond the scope of this textbook and of little clinical use to the neurosurgeon. Much more important than distinguishing what specific disorder of the PNS is affecting a particular patient is the ability to distinguish that the patient has a PNS disorder, rather than a myelopathy. Individually, most disorders of the peripheral nervous system are not encountered frequently. However, as a group, surgeons deal with these diseases on a regular basis because they are often confused with either myelopathies or musculoskeletal disorders. The specific disorders to be covered in this chapter include acquired myasthenia gravis, autoimmune polymyositis, polyradiculoneuritis, and tick paralysis.

Position the patient in lateral recumbency and aseptically prepare the pelvic limb as you would for stifle surgery (see p. 1331). Prior to making the skin incision, palpate for the peroneal nerve so that the nerve will be in the region of your surgical approach. Make a vertical skin incision caudal to the patellar ligament, from a few centimeters proximal to the level of the patella to a few centimeters distal to the tibial tuberosity. Make the incision approximately 2 cm caudal to the level used to access the stifle joint (see p. 1331). Use a blade or Metzenbaum scissors to expose the biceps femoris muscle and fascia. Pull up a portion of this muscle with DeBakey forceps and incise the muscle full thickness along its longitudinal striations using Metzenbaum scissors. Continue the incision until a digit can be placed beneath the muscle to palpate the underlying peroneal nerve. Using either a No. 11 blade or Metzenbaum scissors, remove a rectangular section of the biceps femoris muscle (at least 2 cm in length). Identify the underlying peroneal nerve and carefully free a segment of the nerve from surrounding fascia. Retract the edges of the incised biceps femoris muscle with Gelpi retractors to facilitate exposure of the common peroneal nerve (Fig. 44-1). Place a stay suture in the edge of the nerve at the proximal site of the planned biopsy, using 6-0 polydioxanone. While applying gentle tension to this suture, incise (with a new No. 11 blade) the nerve medial to the stay suture knot to begin the nerve biopsy. Do not remove more than one third of the width of the nerve at the biopsy site. Using either the No. 11 blade or fine tenotomy scissors, remove a longitudinal strip of the peroneal nerve (1 to 3 cm, depending on patient size) for biopsy. If a distal neuropathy is suspected, procure a second biopsy specimen from the cranialis tibialis muscle. Close the site routinely. 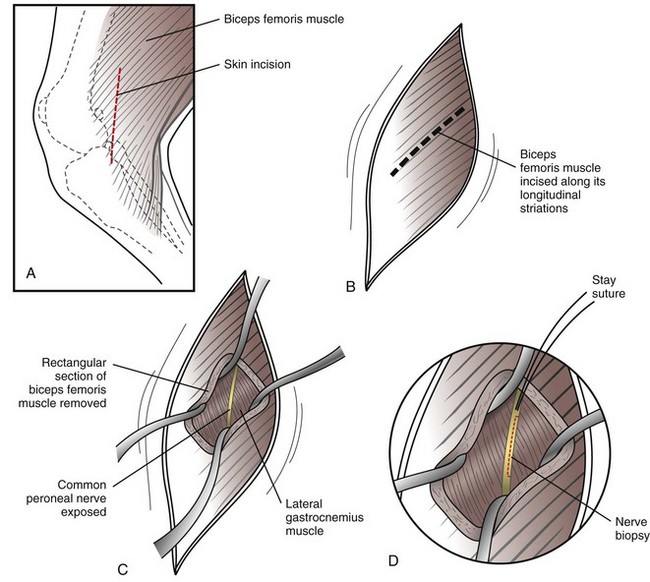 FIG 44-1 Schematic illustration of the approach for a peroneal nerve biopsy. A section of biceps femoris muscle has already been removed for biopsy.

Acquired myasthenia gravis (MG) is an autoimmune disorder of the neuromuscular junction (NMJ), in which autoantibodies are formed against nicotinic acetylcholine (ACh) receptors of skeletal muscle. The classic clinical manifestation of the autoantibody attack is skeletal muscle weakness, which worsens upon repeated exertion.

Acquired myasthenia gravis (MG) is a common autoimmune neuromuscular disorder of dogs that is rarely diagnosed in cats. Autoantibodies produced against the nicotinic acetylcholine (ACh) receptors of skeletal muscles impair neuromuscular transmission and produce weakness that worsens with exertion. Megaesophagus is a frequent feature of acquired MG in dogs because of the high proportion of skeletal muscle in the canine esophagus; but it is less common in affected cats. Several clinical forms of acquired MG have been identified including focal, generalized, and acute fulminating. The thymus is believed to play an integral role in the initiation of the autoimmune response to ACh receptors, but the factors responsible for triggering the autoimmune response of acquired MG are still unknown.

There is a bimodal age distribution for acquired MG in both dogs and cats, with peak incidences at around 3 and 10 years of age. Both males and females are affected, although there may be a slight decreased tendency for sexually intact dogs to develop MG. Breeds most commonly afflicted with MG include German Shepherds, Golden Retrievers, and Labrador Retrievers. Other breeds with a relatively high risk for MG include Akitas, Terriers, and German Short-haired Pointers. Somali cats (related to Abyssinians) and Abyssinian cats are at risk for developing acquired MG.

Common historical complaints include difficulty swallowing, regurgitation (often described as vomiting by owners), ptyalism, coughing, labored breathing, and limb muscle weakness. The specific constellation of clinical signs and time-course of development reported by the owner varies with the clinical form of MG.

In addition to the historical complaints listed here, the nature of appendicular (limb) muscle weakness is variable in both distribution and severity. The clinical features of the different forms of acquired MG are provided in Box 44-1. Dogs and cats with MG typically do not have specific neurologic deficits but display varying levels of weakness. It is common for pelvic limb weakness to be the main (sometimes the only) clinical manifestation in dogs with MG; this feature often leads to misdiagnosis of MG as either a myelopathy or pelvic limb musculoskeletal disorder.

With (usually) or without focal signs

Blood work (CBC, serum biochemistry) is usually normal or may reflect a septic process in the face of pneumonia. The most definitive blood test for the diagnosis of acquired MG is an immunoprecipitation radioimmunoassay (RIA) that quantitates serum autoantibodies directed against the ACh receptor. Concentrations of ACh receptor antibody above 0.6 nM/L and 0.3 nM/L are diagnostic for MG in dogs and cats, respectively. The edrophonium (Tensilon) challenge test may provide a presumptive diagnosis of MG in patients while awaiting results of an RIA if it is clearly positive (i.e., the patient displays a clear improvement in strength shortly after administration of IV edrophonium). However, some dogs with various myopathies will also display increased strength after receiving edrophonium. Although the association between MG and thyroid disease is tenuous, thyroid status should be evaluated in MG patients.