The prosencephalon consists of the telencephalon and the diencephalon. The diencephalon is composed of the thalamus, epithalamus, metathalamus, subthalamus, and hypothalamus, with the third ventricle in the center. The telencephalon is the cerebrum, which consists of two cerebral hemispheres. The cell bodies of the neurons in the cerebrum are located in two general areas. One area is on the external surface of the gyri in the laminations of the cerebral cortex. The other area is deep to the surface in basal nuclei. The caudate nucleus, pallidum, and putamen are basal nuclei that function in the extrapyramidal system. The amygdaloid body and septal nuclei function mainly in the limbic system.

The cerebral cortex covers the external surface of the cerebrum and can be divided into three general regions on the basis of the evolution of each. The paleopallium (pall-cloak) consists of the olfactory bulb, the olfactory peduncle, and the cortex of the piriform lobe. The archipallium is the hippocampus, which is an internal gyrus that is rolled into the lateral ventricle during development. The neopallium is the most recently evolved and makes up the remainder of the cerebrum, which includes all the gyri dorsal to the rhinal sulcus.

The term limbic system refers to the anatomic arrangement of the telencephalic neurons and tracts that are components of this system and are arranged primarily as two incomplete ring-like structures on the medial aspect of the cerebral hemisphere at its border with the diencephalon (Fig. 17-1). Limbus means edge or border, and these telencephalic structures form the border of the main mass of the cerebral hemisphere. The term has been expanded in usage to include the major nuclei and pathways in the rostral brainstem that are connected with these telencephalic structures anatomically and functionally (Box 17-1). 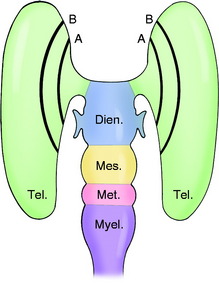 The amygdaloid body, one of the basal nuclei of the telencephalon, is a complex of nuclei located in the piriform lobe deep to the olfactory cortex (Fig. 17-2; see also Fig. 2-3). A projection pathway of the neurons in the amygdaloid nuclei, the stria terminalis, courses in the angle between the thalamus and the caudate nucleus. It forms an incomplete circle shaped like a C that progresses from the amygdaloid body in a caudal, then dorsal, and then rostral and ventral direction to terminate in the septal area and the rostral hypothalamus. A diagonal band courses on the ventral surface of the cerebrum, connecting the amygdaloid body with the septal area. 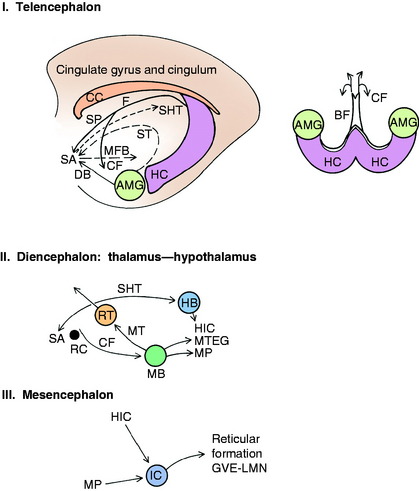 The cingulate gyrus consists of cerebral cortex and its corona radiata, the cingulum. It is located dorsal to the corpus callosum and is continuous caudally with the parahippocampal gyrus and rostrally with the septal area (see Fig 2-2 through 2-6). The cingulum is a long association tract consisting of longitudinal axons in the white matter (corona radiata) of the cingulate gyrus (see Fig. 17-2). These axons course from the parahippocampal gyrus, located caudally, to the septal area and frontal lobe gyri located rostrally.

The septal area consists of the subcallosal area, which is the cerebral cortex ventral to the genu of the corpus callosum and the septal nuclei. The septal nuclei are a collection of neuronal cell bodies in the rostral septum pellucidum that bulges into the medial side of the lateral ventricle. This is dorsal and just rostral to the bend in the body of the fornix, where it forms the columns of the fornix. The septal area connects with the hippocampus by way of the adjacent columns of the fornix; with the amygdaloid body through the diagonal band and stria terminalis; and with the habenular nucleus via the stria habenularis thalamus (see Fig. 2-3). The medial forebrain bundle courses caudally from the septal area into the hypothalamus. By way of this pathway, limbic system efferents can influence the hypothalamic centers that control the activity of the general visceral efferent (GVE) system. The function of the limbic system involves visceral motor activation. Hypothalamic nuclei serve in the upper motor neuron system that regulates the GVE system. These hypothalamic nuclei receive numerous limbic system efferents.