Morphology and Function of Skin Cells

In this chapter, the morphology of the cells that make the skin is discussed. To better interpret the cytological specimens collected from skin lesions, it is mandatory to know the morphology of the cells that compose the epidermis, the dermis and the subcutaneous tissue, in addition to the cells that normally reside in the dermis and finally, those produced from bone marrow that reach the skin via the bloodstream during inflammatory processes.
Anatomically, the skin is made up of three main different anatomical parts: the epidermis, the dermis with the follicular and glandular adnexa, and the hypodermis, also known as the subcutis.

1.2 The Cells of the Epidermis

More than 90 % of the epidermis consists of nucleated cells that mature to become anucleate and completely keratinised cells. The remaining cells comprise melanocytes and Langerhans cells (dendritic antigen-presenting cells), which are only detectable in the case of proliferative/neoplastic processes, which occur in melanocytomas/melanomas and in cutaneous histiocytoma respectively. As epidermal cells are mainly composed of keratin, they are named keratinocytes, which make up the four strata of the epidermis: basale, spinosum, granulosum and corneum; because the latter is completely keratinised, its cells are called corneocytes (Fig. 1.1). 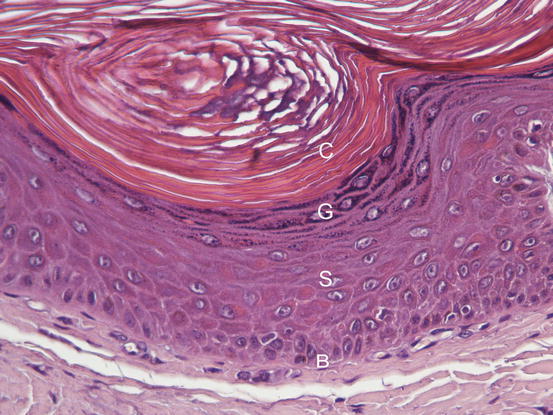 Histology of the epidermis: hyperplastic epidermis, in which the different epidermal layers are well defined: b stratum basale, s stratum spinosum, g stratum granulosum and c stratum corneum
Under normal conditions, it is possible to collect only a few corneocytes from healthy skin, as they are the only cells present on the surface of the epidermis as a result of the physiological keratinisation process.

The cells of the basal layer are the smaller among the keratinocytes and are also those less frequently observed on cutaneous specimens. They are cuboidal in shape in the tissue, but appear roundish when observed on cytological specimens; they measure 8–10 μm, have round nuclei, sometimes with a single evident nucleolus, and a high nucleus–cytoplasm ratio (N/C ratio). The cytoplasm is sparse and deep blue in colour. Sometimes, it can be difficult to differentiate between a basal keratinocyte and a non-activated histiocytic cell. Two cytological characteristics of the basal keratinocytes that help the cytologist to recognise them are the presence of a thin clear halo that is interposed between the nucleus and cytoplasm and they are usually arranged in clusters (only rarely singularly; Fig. 1.2). 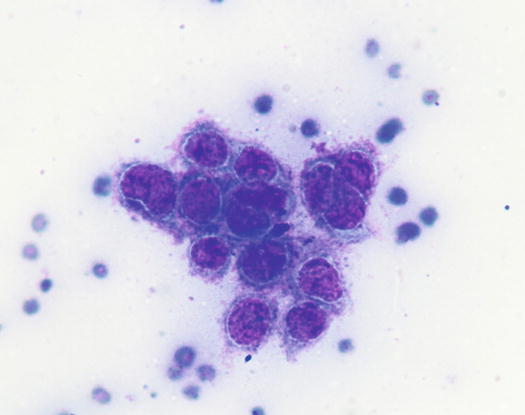 Cytology of the stratum basale: a cluster of basal keratinocytes. Note the achromatic perinuclear halo

The cells of the spinosum layer are larger than basal ones, and are much more frequently observed as they are the most numerous nucleated cells of the epidermis. Spinous keratinocytes are large polygonal cells with angled borders and round to oval nuclei, usually central, with a lower N/C ratio than basal cells. The cytoplasm is large and of varying colours, which range from pale pink to sky blue and even dark blue (Fig. 1.3). 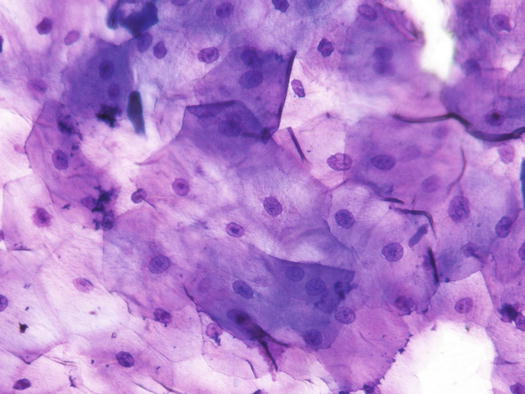 The cells of the granulosum layer are so called because they contain intracytoplasmic keratohyaline granules of different sizes and round in shape. The granules take on an eosinophilic colour when stained with Romanowsky type dye. The pink colour of the granules makes them easily recognisable and cytologically distinguishable from any other type of granule, pigment or microorganism, which can be detected on the surface of keratinocytes. The size of the cells is variable, but they are voluminous with a polygonal shape and a low N/C ratio (Fig. 1.4). 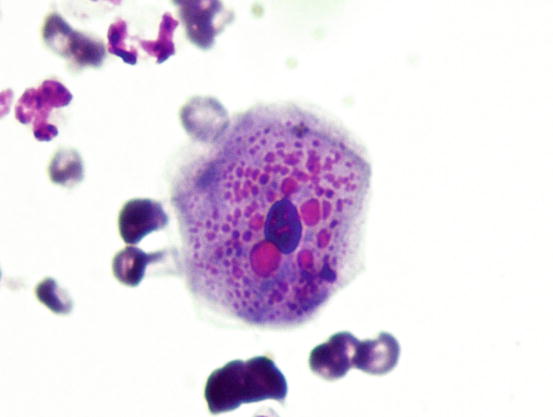 The normal epidermal keratinisation process results in the formation of the stratum corneum, which is composed of keratinocytes that have lost the nucleus to become completely keratinised. For this reason they are also called corneocytes. The morphology of the corneocytes is highly variable and ranges from large polygonal, flattened, anucleate cells with angled borders, to deeply blue-stained cells with a lanceolate or papyrus-like appearance (Figs. 1.5 and 1.6). Colour differences in corneocytes range from completely unstained cells to cells that are coloured in various shades of pink, purple and blue. These differences depend not only on the amount of keratin present in the individual cells, but also on the failure to dissolve ceramides, sphingosine and cholesterol, the normal constituents of the lipid film forming the skin barrier that are still present on their surface. The excessive presence of lipids can, in fact, reduce or inhibit the penetration of stains into the cells. 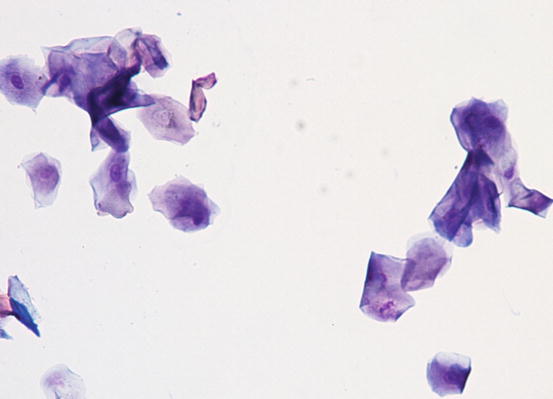 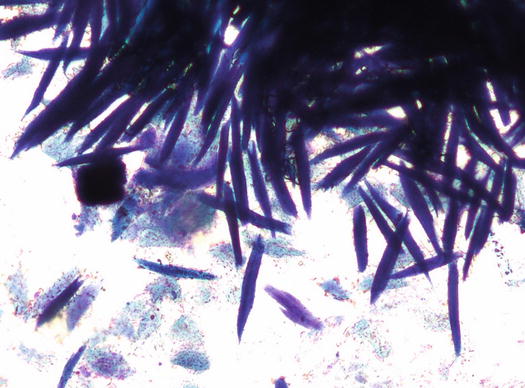 Cytology of the stratum corneum: many lanceolate and deeply blue stained corneocytes
The cytological recognition of keratinocytes is very important, because in many cases their identification provides very useful indications, as occurs in specimens collected from pustules of animals suffering from pemphigus foliaceus (acantholytic keratinocytes). It should be stressed that knowledge of the normal morphology of keratinocytes can be very useful so to make a better interpretation, in the context of an inflammatory lesion, of the dysplastic versus neoplastic changes in the epithelial cells that allow malignancy to be rapidly suspected and histology to be performed more quickly (Fig. 1.7). 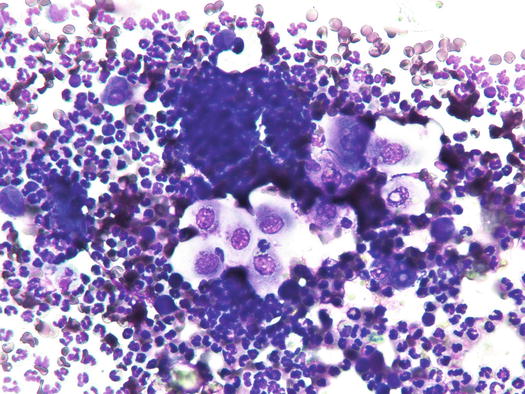 Cytology of dysplastic keratinocytes: note the alterations represented by nuclei with irregular profiles and pseudo-vacuolation
Under normal conditions, only large sheets of corneocytes can be collected from the surface of the skin (Fig. 1.8). With transparent acetate tape, the collection of only nucleated keratinocytes from superficial desquamative crusty lesions, can indicate, in animals with peculiar clinical presentation, the presence of parakeratotic hyperkeratosis (Fig. 1.9). These cytological findings can be observed in some primary keratinisation defects such as superficial necrolytic dermatitis (hepato-cutaneous syndrome), zinc-responsive dermatosis and idiopathic nasal parakeratosis of the Labrador retriever (Fig. 1.10). It must be pointed out that a small number of nucleated keratinocytes collected from the skin surface, together with corneocytes, is a common finding in canine and feline dermatology. Indeed, focal parakeratosis is an alteration in keratinisation alteration observed in many diseases and not necessarily linked to primary keratinisation defects; in these cases, the clinical presentation guides the clinician in the diagnostic procedures to follow. 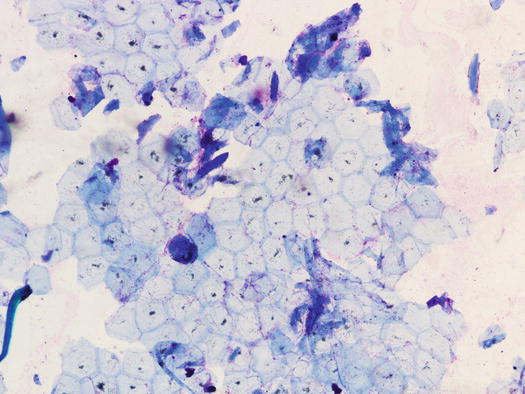 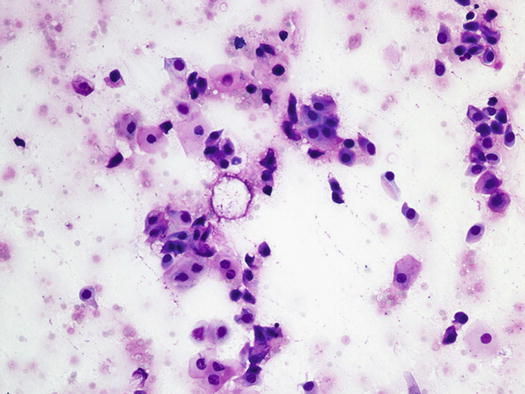 Cytology collected from the nose of a Labrador retriever affected by idiopathic nasal parakeratosis. Note the presence of nuclei in all the keratinocytes sampled 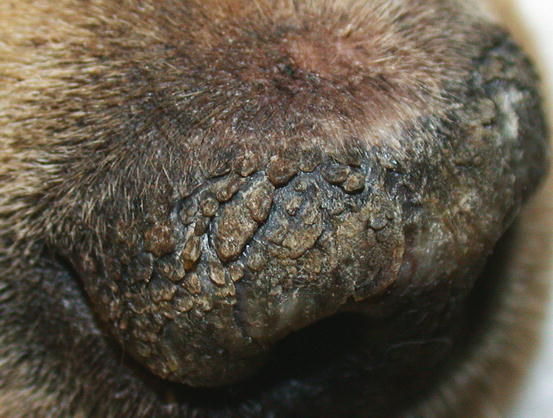 1.3 The Cells of the Dermis and Adnexa

The dermis is the intermediate portion of the skin located between the epidermis and the adipose tissue. Anatomically, it is the most complex part of the skin because it is made up of the connective tissue, vascular and nervous networks, and by the adnexa represented by hair follicles and sebaceous and sweat glands.
The connective tissue is composed of fibres, ground substance and cells. The fibres are both insoluble as collagen and elastin and soluble such as proteoglycans and hyaluronan (hyaluronic acid). Most of the extracellular matrix is produced by fibroblasts, which also generate the ground substance (glycosaminoglycans or mucopolysaccharides).
Without going into the complex world of the connective tissue, which is beyond the aim of this chapter, it can be deduced from the above that fibrocytes/fibroblasts are the most frequently detectable dermal resident cells on slides coming from inflammatory skin lesions.
Fibrocytes are inactive fibroblasts, with elliptical nuclei, slightly basophilic cytoplasm and with opposing thin tails that give the cells an elongated spindle shape (Fig. 1.11). Fibroblasts are also spindle cells that can take a star-like or tentacular appearance; the nuclei are round to oval and the cytoplasm is basophilic and often vacuolated. Sometimes, fibroblasts are found as pseudo-aggregates, in which they produce an extracellular matrix that holds the cells together; the latter is cytologically recognisable as an eosinophilic amorphous and fibrillar material (Fig. 1.12). Fibroblasts are usually found in specimens collected from the wound-healing process (granulation tissue) and in these cases, they must not be confused with mesenchymal neoplastic cells. Reactive fibroblasts may show severe morphological atypia, such as anisocytosis, double nuclei, prominent nucleoli and many mitosis, which resemble those observed in some spindle cell tumours (Fig. 1.13). When the biosynthetic activity of fibroblasts ends, they turn into fibrocytes; therefore, fibroblasts and fibrocytes represent two functional moments in the existence of the same cell. However, a small number of fibroblasts can be found in all chronic inflammatory processes in which they are inevitably stimulated to repair tissue damage. 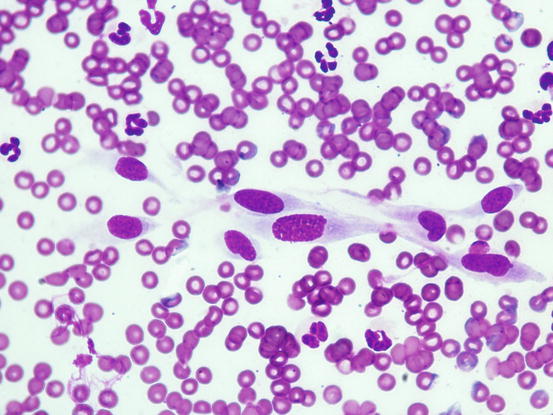 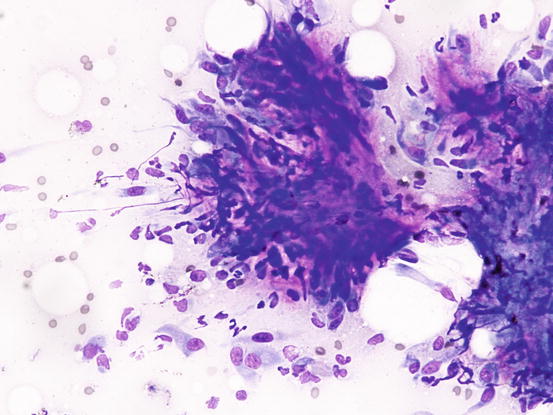 Cytology of the extracellular matrix: bright eosinophilic material that holds together many reactive fibroblasts. This material represents the ground substance produced by fibroblasts 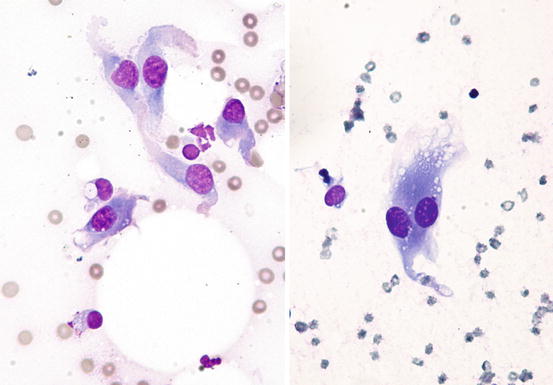 Cytology of reactive fibroblasts: dysplastic fibroblasts with a spindle or starry appearance. Some cytological features can generate doubts with regard to a spindle cell neoplasia
Dendritic antigen-presenting ells (APCs) are also present in the dermis, although they are few and not distinguishable from other histiocytes on cytological specimens.
A reactive proliferation or a neoplastic transformation of dermal APCs gives origin to the so-called histiocytic diseases, such as cutaneous/systemic reactive histiocytosis and histiocytic sarcomas in dogs and feline progressive histiocytosis in cats, which are discussed in Chap. 4.
Finally melanocytes, around the vessels and hair follicles, particularly in dogs with black coats, are physiologically present; these cells are not visible in cytology until their neoplastic transformation occurs.
In some samples it is possible to find blood capillaries, represented by linear and sometimes branched structures, composed of endotheliocytes with elongated nucleus and indistinct cytoplasm that delimitate a thin central lumen in which some red blood cells (RBCs) may be still evident (Fig. 1.14). 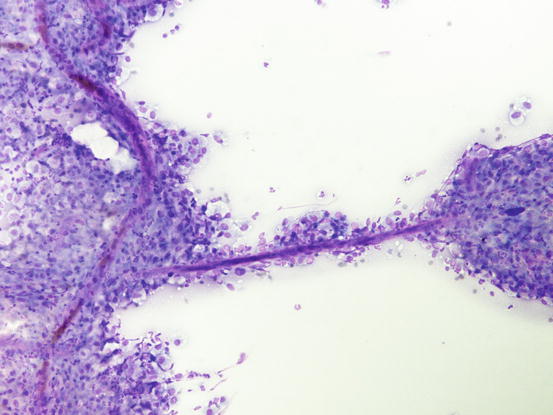 Cytology of vessels: linear and branched hematic vessels surrounded by many inflammatory cells
Collagen fibres are proteic components of connective tissue produced by fibroblasts, which are cytologically recognisable as fibrillar linear or branched eosinophilic formations (Fig. 1.15). 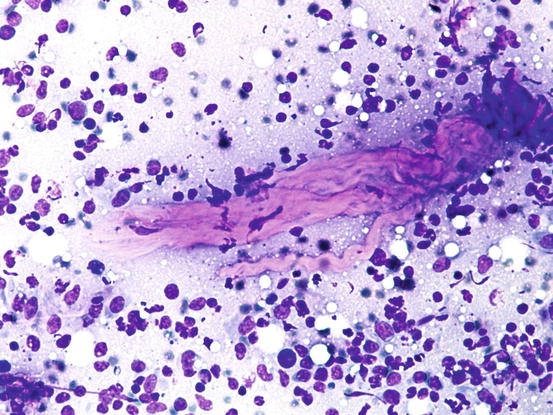 Cytology of collagen fibres: linear wavy eosinophilic formations represent collagen fibres
The dermal adnexa are composed of hair follicles and sebaceous and sweat glands.
The follicles are a continuation of the external epidermis, which direct downwards to form the follicular wall. Knowledge of the follicular cells and of the different types of keratins they produce is mandatory for the interpretation of cytology of follicular neoplasms. A more detailed description of the follicular morphology and of the different types of keratins are dealt with in the chapter regarding epithelial tumours (Chap. 4).
During inflammatory processes, epithelial aggregates of sebaceous and apocrine glandular tissue are commonly collected.
The sebaceous glands are associated with follicles forming the so-called pilosebaceous unit. Morphologically, they are characterised by round to elongated lobular aggregates of cells that contain many intracytoplasmic overlapping micro-vacuoles, filled with sebum, giving cells a characteristic foamy appearance. Lobules of mature sebocytes are bordered by a single line of basaloid cells, uniform in size and with small hyperbasophilic cytoplasm, representing immature germinative cells (reserve cells), which mature into sebocytes (Fig. 1.16). In cats, mature sebocytes are similar to those found in dogs, the difference being that the size of the cytoplasmic vacuoles is more uniform in cats. The secretory duct, named the pilosebaceous canal, is short, lined with squamous epithelium and ends directly in the follicular lumen, in which sebum is drained. Sebaceous glands have a holocrine way of secretion, in which the plasma membrane dissolves and the intracytoplasmic sebum is released into the lumen. In cytological specimens, immersed in the sebum, debris of the dead sebocytes and some keratinocytes coming from the ductal epithelium can be observed (Figs. 1.17, 1.18 and 1.19). Clusters of well-differentiated sebocytes are commonly observed in dogs with hyperplasia and neoplasia of the sebaceous glands. In some cases, aggregates of sebocytes of variable size can be collected during the sampling from inflammatory lesions (Fig. 1.20). In these cases, they must be interpreted as being innocent bystanders. 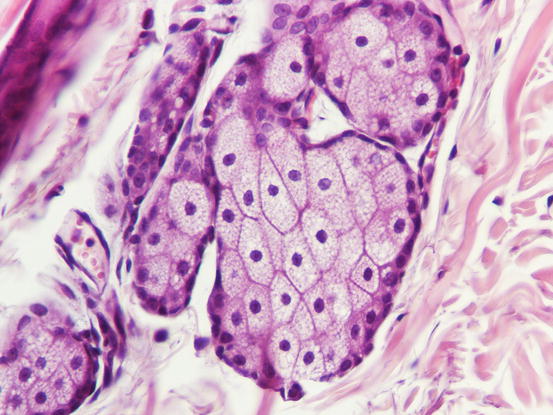