The most frequently diagnosed esophageal surgical conditions are foreign body obstructions and stricture formation, though vascular ring anomalies and intramural masses are also found. Diagnosis is based on good history taking combined with contrast radiography and or esophagoscopy (endoscopy). Though esophageal conditions are rare in the cat, their early recognition and intervention gives the best opportunity for a successful outcome. The esophageal anatomy together with the diagnosis and surgical management of these conditions is discussed in this chapter.

The esophagus is a hollow distensible muscular tube, some 18–19 cm in length in the cat,1 which dilates and propels food from the pharynx to the stomach. The wall of the esophagus has four components, but differs from other intestinal structures in having a loose outer adventitial layer but no serosa.2–4 In common with other viscera it has muscularis layers, a submucosa and a mucosa. The mucosa is plentiful and thrown into longitudinal folds cranially (Fig. 27-1). In the distal third the mucosa is folded transversely to create the herringbone pattern that is seen on contrast radiography and esophagoscopy. The mucosa is covered by stratified squamous epithelium that is continuous with the oropharynx. Distally the intra-abdominal esophagus is lined with columnar epithelium. Tubuloacinar glands, that maintain luminal lubrication, are confined to the cervical portion of the feline esophagus.3 The folds of the mucosa may have a role to play in closure of the distal esophagus, as a true cardiac sphincter has not been identified in the cat.2 Based on pressure manometry the functional lower esophageal sphincter is at the level of the diaphragm in the cat and is approximately 1.4 cm long.5 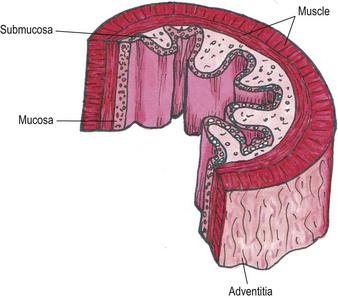 The thick submucosa has a rich vasculature and elastic tissue, though the presence of neural tissue in this layer is debated.2 The submucosa is the suture-holding layer of the esophagus.6 The rich plexus of intramural vessels in the submucosa can support the thoracic esophagus even if the segmental blood supply is compromised.7 The majority of the muscle in the esophageal wall is striated but in the distal few centimeters, in the cat, the muscle is smooth. Centrally, there are two spiral layers of muscle that cross over at right angles and change from superficial to deep by means of dorsal and ventral decussation of the fibers; this is less well defined cranially and caudally. Cranially, the esophageal muscle is a continuation of the cricopharyngeal muscle and the cricoesophageal tendon. The cranial esophageal sphincter is formed by the cricopharyngeal muscle and associated elastic tissues. The esophagus does not have a distinct outer serosal layer but is covered by adventitia, a layer of connective tissue, which adheres to adjacent structures but also allows a degree of mobility.

Though the presence of a neural network in the submucosa is a matter of debate, there is a well-defined myenteric plexus of Auerbach between the muscle layers. The vagal nerve supplies the special visceral efferent fibers to the esophagus via its various branches. The cervical esophagus receives its blood supply predominantly from the cranial and caudal thyroid arteries together with smaller branches from the carotid arteries. The bronchesophageal artery supplies the majority of the intrathoracic portion, while the terminal portion is vascularized by the esophageal branch of the left gastric artery. Venous drainage is via the jugular veins in the cervical portion and the thoracic portion drains into the azygous vein.

Esophageal disorders in cats are rare, comprising only 1% of referred feline cases in a recent study.8 As the majority of the esophagus is intrathoracic, diagnosing esophageal disorders requires good history taking and the use of ancillary diagnostic aids, in particular esophagoscopy and radiography. Masses or dilatation of the cervical esophagus are potentially palpable and cats with esophagitis may resent palpation of the cervical area.9

It is essential to carry out a full and thorough examination of the patient as concurrent conditions may also be present, e.g., laryngeal paralysis, peritoneo-pericardial diaphragmatic hernia, gastroesophageal reflux, esophageal hiatal hernia and inflammatory bowel disease. A summary of disorders causing esophageal dysmotility in the cat is listed in Box 27-1.10

Clinical signs of esophageal disease include the following, either singly or in combination: vomiting/regurgitation, dysphagia, anorexia, coughing, noisy breathing, nasal discharge, dyspnea, weight loss and poor growth. It should be noted that differentiating between true vomiting and regurgitation can be difficult in the cat, though the observant owner may note the lack of retching that is classically associated with vomiting in cats. It should also be noted that cats may vomit ‘casts’ of material that mimic esophageal contents.

The decision whether to use endoscopy and/or radiography will depend on the clinician’s experience and the equipment available, though both modalities are now commonplace.8,9 The use of CT or MRI has been advocated in diagnosing esophageal tumors.11

When initially assessing the esophagus radiographically, it is important that sedation and anesthesia are avoided as they may lead to relaxation of the esophagus and a false positive diagnosis of a gas-filled dilated esophagus.8 Plain or survey radiographs should always be taken before carrying out contrast studies. For most cases barium sulphate is used as a positive contrast medium, but if an esophageal perforation is suspected water-soluble iodine based contrast medium should be used. The herringbone pattern seen with positive contrast is normal in the distal third of the feline esophagus. If there is concern over the motility of the esophagus (see Box 27-1) (e.g., in the pouch cranial to a vascular ring anomaly) consideration should be given to using fluoroscopy, if available.

Both rigid and flexible endoscopes are suitable for examination of the cat’s esophagus (Fig. 27-2). Endoscopy is particularly valuable in confirming the presence of strictures, foreign bodies and masses. If barium contrast studies have been carried out, endoscopy should not be performed until 24 hours later as the barium may obscure any abnormality. For further information on endoscopy, see Chapter 9. 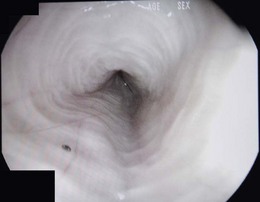 Surgical diseases of the esophagus

Though esophageal disease is not common, in a recent study nearly 60% of cases required surgical intervention.8 The majority of those cases had esophageal strictures, foreign bodies or intramural neoplasia. Disorders associated with the esophageal hiatus are rare; conditions such as gastroesophageal intussusception and hiatal hernias are covered in Chapters 28 (Stomach) and 45 (Diaphragm), respectively.

An intramural esophageal stricture is the end stage of the submucosa and muscular layers healing by fibrosis as a consequence of severe deep esophagitis. The possible causes of intramural esophageal stricture in the cat are listed in Box 27-2. Clinical signs are seen within five to 14 days of the injury or onset, with dysphagia, regurgitation and weight loss being the most common signs. Confirmation is by positive contrast radiography (Fig. 27-3) and/or esophagoscopy; in some cases radiographic evidence of aspiration pneumonia may be seen (Fig. 27-4). 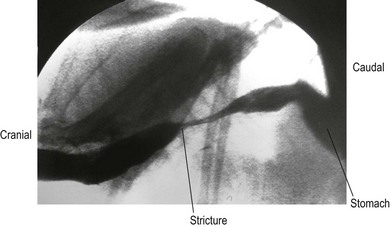 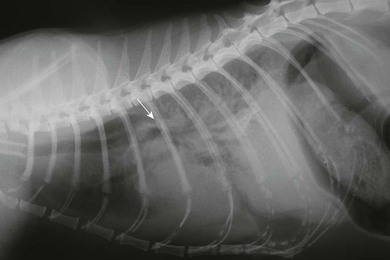 Figure 27-4 Thoracic radiograph of the cat in Figure 27-3 showing evidence of aspiration pneumonia with consolidated dorsal lung lobes. The gas-filled stomach is due to aerophagia. The site of esophageal stricture is indicated by an arrow. (Courtesy of Ian Hopkins.)

Endoscopically, a ridge, ring, or web of fibrous tissue (Fig. 27-5), is seen, which dramatically narrows the lumen (average diameter is 3–4 mm); this cannot be distended with insufflation and the endoscope will not pass through. Over 75% are in the caudal thoracic esophagus;12 multiple strictures may be present. 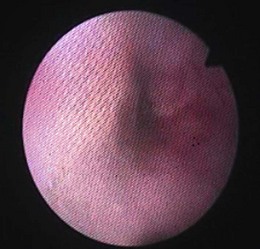 A number of techniques have been proposed for managing esophageal strictures; these include dilatation with an endoscope, serial bougienage, balloon dilatation, stents, and surgical resection and anastomosis. The median number of dilatation procedures per patient is two to three, with ranges varying from one to 20 attempts to dilate the stricture.8,12,18–21

Balloon dilatation of a single stricture is successful in up to 80% of patients; there is no correlation between the number of attempts and long-term success.18 A recent report showed that the outcome of serial bougienage was good in 75% of cats.22 Retrospective studies have shown no difference in complication rates between bougienage and balloon dilatation, with perforation rates reported to be from 0–3.9%.4,22

Resection and anastomosis of strictures has not been well described in the cat, though Shamir and others32 report success in one cat. With the relatively high success rate of serial dilatation/bougienage, surgical resection can currently only be recommended when other techniques have failed.

Vascular ring anomalies have been rarely described in the literature.24,25 Affected cats are usually presented as kittens for regurgitation of solid food that began at the time of weaning. Most cats are presented before 6 months of age. Regurgitation of undigested food usually occurs immediately after eating, but is sometimes delayed as ingesta is retained in a large esophageal pouch that may develop cranial to the obstruction. Liquids and semi-solid food are preferentially retained. On physical examination, most cats are underweight. Esophageal dilatation cranial to the base of the heart in young kittens is normally the result of an extramural constriction secondary to a vascular ring anomaly (Fig. 27-6). A persistent right aortic arch is by far the most common anomaly, accounting for 81% of cases, but others have been reported, such as anomalous subclavian artery, double aortic arches and left aortic arch with right ligamentum arteriosum.25 Early diagnosis and surgical intervention is required if the prognosis is to be favorable. Aggressive supportive therapy including, if required, rehydration, nutritional support and antibiotic management for any respiratory complications must be initiated prior to surgical intervention. 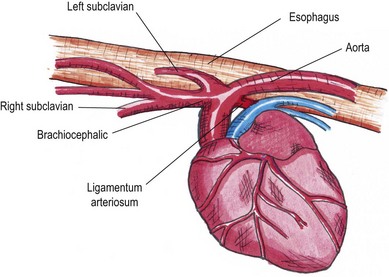 Figure 27-6 Normal anatomical arrangement of the aortic arch and vessels in the cat.

The degree of megaesophagus and hypomotility preoperatively are important prognostic indicators. Those kittens demonstrating comparatively minor dilatation and demonstrable motility on fluoroscopy are likely to have a significantly improved prognosis compared to those with major redundant sacculation. A proportion of cases will require permanent feeding from a height; the prognosis is therefore guarded in some cases and owners should be made aware of this prior to surgery. Resection or plication of redundant esophageal tissue has not proved successful and the technique is not recommended. Recurrence of clinical signs may be due to postsurgical scarring around the esophagus. In such cases bougienage may be attempted or repeat surgery may be necessary to remove the scar tissue. The prognosis for such cases is generally guarded.

Foreign body obstruction of the esophagus is common in the dog but rare in the cat, due to their more fastidious eating habits. A variety of foreign bodies have been described in the esophagus of the cat, which are commonly acquired during hunting or play behavior. String, bone, trichobezoars (hairballs), needles, and fishhooks have all been seen.26,27 Bones that cause obstruction tend to be ‘V-shaped’ avian bones (wishbones; Fig. 27-7),28 though others may be seen (Fig. 27-8). Obstructions reportedly occur in one of three portions of the esophagus, namely the thoracic inlet, the heart base (or proximal to the cardia) and the diaphragmatic hiatus. The presenting signs are those commonly seen with esophageal disease, i.e., dysphagia, hypersalivation, gagging, and retching. The severity of signs and the rate of onset will depend on whether the obstruction is partial or complete. Respiratory signs due to aspiration pneumonia or mediastinitis, secondary to esophageal perforation, may be encountered in severe cases. 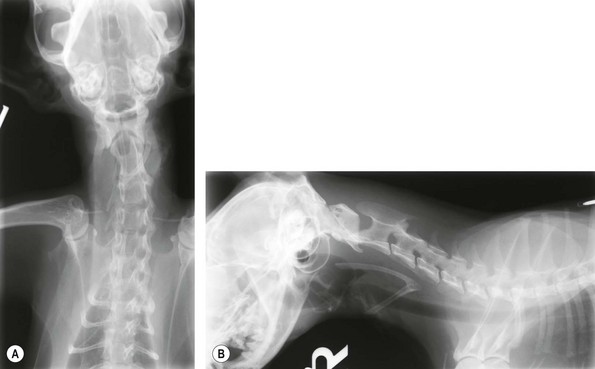 Figure 27-7 Cervical esophageal foreign body. (A,B) A 2-year-old female entire stray domestic short-haired cat presented with dysphagia. A hard percutaneous foreign body was palpable in the ventrolateral mid to cranial cervical region. The cat was anesthetized and orthogonal radiographs showed a bony foreign body in the mid cervical area. (C) The cervical area was clipped of hair and aseptically prepared for surgery. The bony foreign body (D) was removed by passing long handled forceps into the proximal esophagus, the percutaneous portion of the bone was then cut and then the reminder of the foreign body was carefully withdrawn using the forceps. The esophagus should be checked endoscopically 5 days post bone removal. The skin wound was left to granulate. (Courtesy of Jon Hall.)