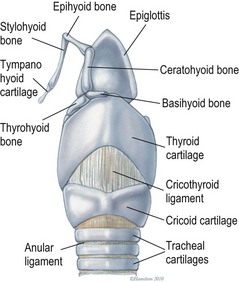 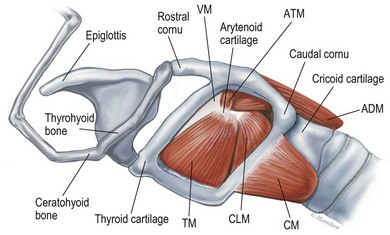 The vocal folds, thyroarytenoid muscles, and cricoarytenoid dorsalis and lateralis muscles attach to the arytenoid cartilages. Movements produced by these muscles and the vocal folds, open and close the rima glottidis, the laryngeal airway. There are two pairs of tissue folds at the cranial end of the feline larynx; the false vocal cords that lie more cranially and laterally, while the true vocal cords lie more caudally and nearer the median plane. The laryngeal ventricles are reported to lie between the true and false vocal cords on each side.2 However, laryngeal ventricles are also reported not to exist in feline species.3 To the author’s knowledge, eversion of laryngeal ventricles has not been described in the cat, though this is commonly observed in dogs with brachycephalic upper airway syndrome.

The false and true vocal cords are most easily visualized by ventral laryngotomy.2 The false vocal cords, often appearing tannish in color, extend from the arytenoid cartilages to the epiglottis. The true vocal cords, appearing as whitish bands, extend from the arytenoid cartilages to the thyroid cartilages. Conflicting reports of the presence of muscle in feline vocal cords exist, with one report stating that feline vocal cords do not contain muscle, in contrast to the dog and horse,4 while another report cites extremely rapid twitching of the vocalis muscle running within the vocal folds as the mechanism of purring.5 The feline cuneiform and corniculate processes are inconspicuous when viewed per os (Fig. 52-3A), while these structures are easily identified in dogs (Fig. 52-3B).2 The larynx is elevated and depressed by action of the thyrohyoideus and sternothyroideus muscles, respectively. The laryngeal lumen is lined by mucous membrane. 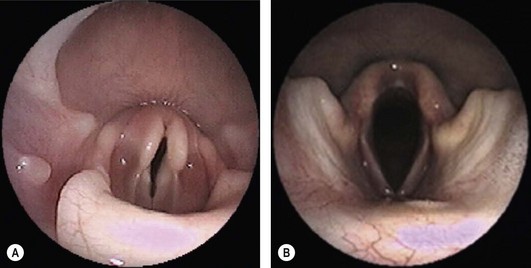 Clinical signs of laryngeal disease in cats are often vague and non-specific. Most commonly reported clinical signs include tachypnea or dyspnea, inspiratory noise or stridor, dysphagia, weight loss, change in vocalization, coughing independent of eating, coughing and gagging when eating, and lethargy. Absence of purring is reported in cats with laryngeal paralysis and resumption of purring has been reported after surgery in some cats.4 Absence of purring and a change in voice is also reported in cats with laryngeal tumors.9 Laryngeal stridor in cats with laryngeal paralysis has been described as frequently having a distinct whistling component that can be less easy to recognize as part of the respiratory cycle.7 Detection of this whistling sound may be facilitated by auscultation of the laryngeal region. Careful palpation of the cervical area to detect masses and compression of the cranial thorax to assess for a mediastinal mass are also important in the physical examination of cats with suspected laryngeal disease.

Diagnostic investigation in cats with clinical evidence of airway obstruction must be undertaken with care to minimize the risk of iatrogenic induction of life-threatening dyspnea. Routine analysis of blood and urine is recommended to rule out concurrent disease, particularly in geriatric cats. In addition to detailed general clinical examination, a complete neurologic examination is recommended.

Radiographic examination of the thorax and neck is recommended, but extreme care in restraint and positioning is required. Sedation or general anesthesia may be required in some cases to obtain diagnostic quality radiographs. Radiographic evidence of airway obstruction may be observed, including hyperinflation of the lungs, prominent caudal displacement of the larynx, and presence of air in the pharynx, larynx, esophagus, and stomach. Mass lesions in the larynx, cervical soft tissues, thoracic inlet, or thorax may be observed (Fig. 52-4). 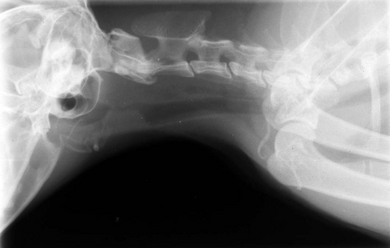 Sonographic examination of the larynx has been reported in 30 cats.10 In five of these 30 cats, the larynx was normal. Vocal fold movement in the normal cats was difficult to identify. The presence and location of cysts and masses were accurately identified in nine cats and the authors considered echolaryngography likely superior to laryngoscopy for identification of cysts and soft tissue masses and cited the clinical advantage that echolaryngography could be performed in these animals without sedation or anesthesia. In eight cats with laryngeal paralysis and/or laryngeal collapse, poor movement of the vocal folds was observed, but further studies and further refinement of the technique are needed for its use in laryngeal paralysis.

The use of advanced imaging techniques in the evaluation of laryngeal conditions in the dog has been reported.11 Findings of laryngeal paralysis were identified by CT in unanesthetized dogs, including failure of arytenoid cartilage abduction and a narrow rima glottis. CT and MRI have not (to the author’s knowledge) yet been evaluated in the cat, but based on the canine study these imaging modalities may have a role to play in the evaluation of laryngeal conditions in this species, although the precise nature of their role remains to be fully defined.

Definitive diagnosis of feline laryngeal disease is most often achieved by direct laryngoscopy per os under a light plane of anesthesia. Direct laryngoscopy can be achieved with a handheld laryngoscope or an endoscope. Direct laryngoscopy allows assessment of laryngeal function as well as observation for laryngeal masses (Fig. 52-5) or other lesions, which can usually be sampled by fine needle aspiration or biopsy per os. Anesthesia is required for direct laryngoscopy. Protocols for sedation and anesthesia appear to vary widely. Similar to other species, general anesthesia may obliterate laryngeal function in normal animals. Particular care is required to distinguish sedative or anesthetic drug-induced laryngeal paralysis from the clinical disease. Additionally, it is important to recognize the potential presence of paradoxical laryngeal movement which could be mistaken for normal laryngeal abduction/adduction; this can be avoided by assessing laryngeal movement in time with each phase of the respiratory cycle. Care is also required to avoid contact with laryngeal structures during direct laryngoscopy due to the propensity for laryngospasm in cats. Complete recovery of base-line response after spraying the larynx of normal cats required 17–100 minutes for 2% lidocaine and 61–256 minutes for 10% lidocaine in one study.12 Assessment of laryngeal function is therefore impossible following local anesthetic administration. 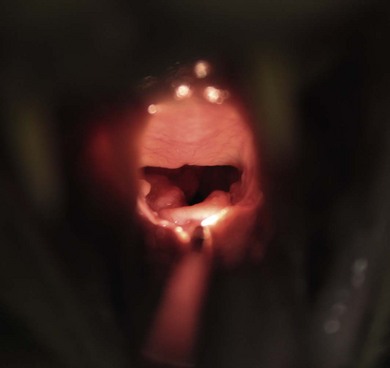 A prospective, randomized clinical trial of anesthetic induction agents for assessment of laryngeal function by videoendoscopy in healthy adult cats premedicated with methadone has recently been reported.13 Induction by slow infusion of midazolam and ketamine to effect preserved arytenoid movement better in comparison to induction with propofol or alfaxolone. However, arytenoid movement was completely obliterated in three cats in the midazolam-ketamine group and three cats in the propofol group. The obliteration of laryngeal function in these normal cats highlights the difficulty of making a definitive diagnosis of laryngeal paralysis in this species. Competent laryngeal protective reflexes were maintained in normal cats anesthetized with ketamine and administered barium suspension orally.14 Barium was aspirated into the pharynx and cranial part of the trachea in these cats, but not into the lower respiratory tract.

In the author’s experience of direct laryngoscopy in cats with laryngeal paralysis, changes observed grossly in affected cats are similar to those observed in dogs with laryngeal paralysis, although much more subtle. Edema of the laryngeal mucosa is generally apparent, but erythema and hyperemia commonly seen in affected dogs is not a prominent feature in cats. Median displacement of the arytenoid cartilages and vocal folds with resultant narrowing of the rima glottis may be appreciated in cats, although the propensity for laryngospasm and complete obliteration of the rima glottis in this species tends to mask the abnormal position in many cats. It is particularly important to avoid depressing the epiglottis with the laryngoscope blade in cats during direct laryngoscopy, as this induces laryngospasm in most cats. Cranial retraction on the tongue together with positioning the laryngoscope blade directly ventral to the epiglottis allows good visualization of laryngeal function in most cats. Paradoxical movement of the arytenoids and vocal folds as observed in dogs has not been observed by the author in cats with laryngeal paralysis.