After identifying the ipsilateral intra-abdominal testis, a second 15-mm skin incision is made 8–10 cm ventral to the scope portal to serve as the first instrument portal. A third 15-mm skin incision 5–10 cm ventral to the first instrument portal is made to serve as the second instrument portal. Trocar-cannula units are inserted through the small skin incisions, perpendicular to the flank musculature. As with the laparoscopic cannula, the instrument cannulas should be long enough to penetrate the peritoneum. The placement and number of the portals in the paralumbar fossa can vary, but generally, only two instrument portals are needed for cryptorchidectomy. Surgical manipulation within the caudal abdomen is based on the technique of triangulation. The mesorchium can be gently grasped and manipulated with forceps to allow adequate exposure of the testis. Injection of local anesthesia into the mesorchium or testis can be performed using laparoscopic injection needles but is generally not needed for laparoscopic cryptorchidectomy.

Extracorporeal emasculation or ligation relies on making just a single instrument portal low within the paralumbar fossa (Fischer & Vachon 1992; Davis 1997). This allows the testis to be pulled through the flank without too much tension on the mesorchium and the vas deferens. The abdominal testis is grasped firmly using claw forceps (Figure 13.2A). Once the testis is firmly grasped, the instrument portal incision is enlarged using both sharp and blunt dissections. With gentle traction, the testis is pulled through the paralumbar fossa (Figure 13.2B). The mesorchium and the vas deferens are emasculated or ligated and then transected. The testis is removed, and the spermatic cord is observed for hemorrhage and gently pushed back into the abdomen. The laparoscopic portal and the small paralumbar incision are closed routinely.

This technique requires two instrument portals placed as previously described (Hendrickson & Wilson 1997). Once the abdominal testis is isolated with grasping forceps, it is temporarily released. The claw grasping forceps are passed through a suture loop, which is placed within the abdomen through a second instrument portal. The testis is grasped again and pulled through the suture loop. Manipulation of both the testis and the suture loop allows the loop to encircle the spermatic cord of the testis. The suture loop is securely tightened using a knot push rod and the long end of the suture is transected. If needed, a second suture loop can be applied to the spermatic cord. The spermatic cord is transected between the testis and the ligatures using laparoscopic scissors. Once the spermatic cord is completely transected, the cord is observed for hemorrhage and the transected testis is firmly grasped with the sharp-toothed forceps. Removal of the testis is achieved by either enlarging the instrument portal, which the grasping forceps are passed through, or by connecting the two instrument portals. Gentle traction on the testis and ensuring the paralumbar incision is large enough to allow passage of the testis facilitates removal (Figure 13.3). Commercial tissue retrieval bags can greatly facilitate the removal of a transected testis (Figure 13.4). Closure of the larger incision used for the removal of the testis is performed in two layers. The external sheath and skin are apposed separately using absorbable suture material. The smaller laparoscope and instrument skin incisions are closed with a single absorbable suture. The cosmetic outcome after flank laparoscopic procedures is generally very good, but scarring and white hair development can occur. Larger incisions will generally have a higher incidence of complications.

Figure 13.3 Removal of the testis with grasping forceps—removal of an abdominal testis through a small incision in the paralumbar fossa. 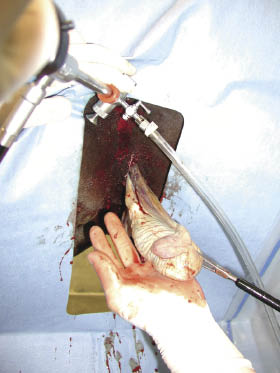 Figure 13.4 Removal of the testis using a retrieval bag—removal of an abdominal testis through a small incision in the paralumbar fossa facilitated by a laparoscopic retrieval bag. 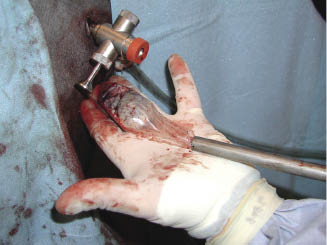 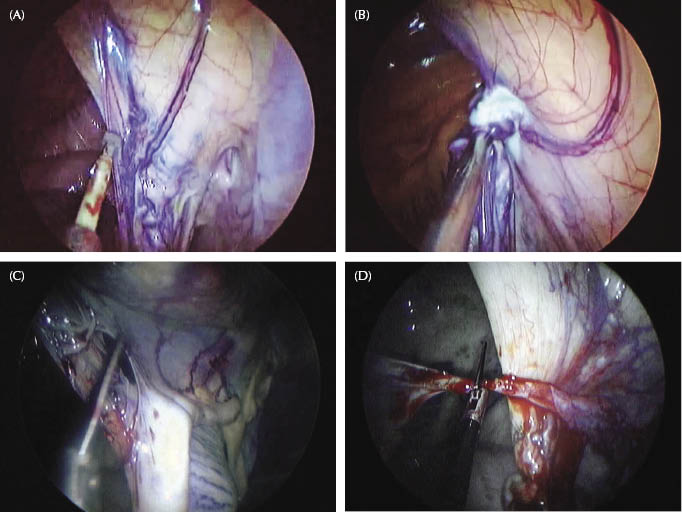