Laparoscopy has long been used as a diagnostic tool. Along with ultrasound and rectal palpation, it may be the best option for the localization and diagnosis of adhesions. It is important to realize that in adult horses, only those structures that are on the surface are readily visible. In foals, the bowel is much easier to manipulate to provide a more thorough evaluation. More recently, laparoscopy is becoming popular in its use as a treatment modality, including adhesiolysis.

When performing adhesiolysis laparoscopically, the breakdown of adhesions may be done via blunt or sharp dissection or via other modalities such as electrosurgery, ultrasound, radiofrequency, and laser (Tittel et al. 2001).

Rationale for the Procedure

It is thought that most clinical adhesions will not resolve spontaneously. Adhesiolysis should be performed whenever adhesions are the cause of intestinal entrapment, obstruction, infertility, and other abdominal problems (Diamond & Freeman 2001; Tittel et al. 2001).

As mentioned previously, any disturbance to the viscera and the peritoneum may be a cause for a de novo (newly formed) adhesion or even reformation of a transected adhesion. This may occur after the adhesiolysis procedure itself. The use of laparoscopic surgery has been shown to be less invasive and, therefore, less apt to cause de novo adhesions (Tittel et al. 2001).

Some adhesions may be incidental, while others may manifest as acute or recurrent abdominal pain, colic, weight loss, and so on (Bouré et al. 2002). For adhesions that do cause clinical problems, laparoscopic adhesiolysis is one of many treatments currently being considered.

Another indication for laparoscopic adhesiolysis is when breakdown via open ventral median celiotomy is not feasible, whether that be due to anatomical location or inability to put the horse under general anesthesia (Smith et al. 2005).

One of the main contraindications to performing laparoscopic adhesiolysis is that the procedure itself may incite de novo adhesions. One study suggests that the use of 0.5% ferric hyaluronate gel administered during the surgery may help prevent these new formations (Lansdowne et al. 2004). This needs to be explored more thoroughly in the horse.

Another contraindication is the fact that during adhesiolysis, other injuries to the surrounding tissues may be induced. In one study, mesenteric rents were sequelae to the procedure of adhesiolysis (Lansdowne et al. 2004). This is a procedure that requires an advanced level of technical skill, which may be a limiting factor in some cases.

Laparoscopic adhesiolysis may be done in both standing and dorsally recumbent positioning. The choice depends upon the horse’s behavior, its ability to withstand general anesthesia, the surgeon’s preference, and, most importantly, the anatomic location of the adhesion (Smith et al. 2005). To view dorsal contents, a standing procedure is indicated. For ventral adhesions, a dorsally recumbent procedure is indicated (Smith et al. 2005). Transrectal assistance may be indicated in the standing procedure for maintaining traction on viscera or adhesions (Bleyaert et al. 1997).

In dorsal recumbency, again depending upon the location of the adhesion, a 20° or 30° Trendelenberg positioning (head down) is likely the most conducive to the visualization of the caudal abdomen (Smith et al. 2005). A reverse Trendelenberg (head up) can be used for adhesiolysis in the cranial abdomen. 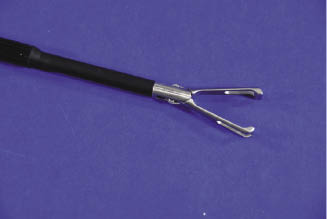 To perform adhesiolysis in Bouré’s study and Bleyaert’s case study, the Babcock forceps were used for traction, while laparoscopic cherry dissectors (Figure 11.3) (Kitner, Ethicon Endo-Surgery, Cincinnati, OH) were used to bluntly dissect. If adhesions were too fibrous, laparoscopic Metzenbaum scissors (Ethicon Endo-Surgery) were used (Bleyaert et al. 1997; Bouré et al. 2002). Any dissection of the mesentery to the intestine should be done close to the intestinal serosa to prevent creating a mesenteric rent (Lansdowne et al. 2004). The cherry dissectors or Babcock forceps may also be used to stop any hemorrhage that may be noted (Bouré et al. 2002). 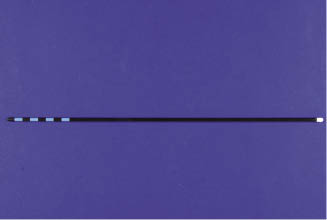