The cervids are a complex assemblage of taxa that include 43 species and 206 subspecies1 characterized by extreme diversity in morphology, physiology, ecology, and geographic distribution. It is important to recognize that in any consideration of reproductive functions no one species represents a “typical” deer. For example, some cervids exhibit highly seasonal patterns of births in cool temperate climes, and others are completely aseasonal in equatorial regions. Furthermore, many species are strictly monovular and bear single offspring annually, whereas others are normally polyovular and bear multiple offspring.

An increased understanding of reproductive function in cervids over the last few decades stems largely from the growing importance of various deer species in agriculture (e.g., deer farming) and ex situ conservation efforts (e.g., captive breeding of endangered species). In general, the research has been directed toward successful application of assisted reproductive technologies to manipulate the genetic constitution of populations (e.g., selection for improved performance traits; avoidance of inbreeding depression) or to increase rates of propagation of specific genetic lineages. There is also a growing awareness of understanding reproductive patterns to assist in the management of under- or overabundant wild deer populations.

However, it should be emphasized that studies to date have focused on a few key species that do not necessarily reflect the full range of cervid physiology. For example, considerable research investment has been directed at the reproductive and genetic management of farmed deer, such as European red deer (Cervus elaphus spp. scoticus, hippelaphus), North American wapiti (Cervus elaphus spp. nelsoni, roosevelti, manotobensis), European fallow deer (Dama dama dama), chital deer (Axis axis), and rusa deer (Cervus timorensis). All tend to be genotypes that exhibit notable gregariousness and are adapted to mixed browsing/grazing. Farmed species, therefore, represent a specific subset of the entire cervid genome biased toward the larger-bodied, monovulatory species with a high degree of behavioral plasticity. Many other cervid species not used for agricultural purposes exhibit different behavioral and reproductive characteristics, particularly smaller-bodied, forest-dwelling browsing cervids of tropical regions.

The necessity for most cervid species to give birth at an appropriate time of year for optimal survival and growth of offspring has exerted considerable influence on their reproductive physiology. Species of northern temperate origin, which constitute the majority of farmed deer, typically conceive in autumn and calve in summer, whereas species of tropical origin exhibit limited seasonality or are completely aseasonal.2

The endogenous mechanisms governing seasonal reproductive patterns in temperate species are robust, being manifest rigorously when animals are transferred between localities despite subtle variations in climate and seasonal feed supply. Furthermore, transference across the equator results in an exact 6-month phase change, even though the relationship between season and feed production differs considerably between continental Northern Hemisphere and insular Southern Hemisphere environments.3

It is now well established that entrainment of seasonal reproductive cycles of temperate cervid species is affected by endogenous recognition of photoperiodic changes, with the majority of species initiating mating activity during decreasing day length of late summer and autumn. Variations in the actual mating season between species of up to 8 weeks usually offsets genetically determined species differences in duration of gestation, such that parturition in most species occurs in midsummer.

The translocation of cervid species outside their natural latitudinal ranges is often associated with reproductive maladaptation to the new environment, even after decades of acclimatization. There have been recent attempts to establish temperate species, such as red deer and fallow deer, in equatorial zones (despite the presence of locally adapted cervid species). Anecdotal evidence indicates that removal of photoperiodic signals has had a marked effect on the overall physiology of these deer. For example, fallow deer translocated from New Zealand to southeast Asia exhibited apparent “de-synchronization” to the extent that 70% of does became anovulatory at the time of joining during their “normal” breeding season. This situation was subsequently corrected by strategic administration of melatonin implants for periods of 2 to 3 months.

Even the translocation of temperate species back into different temperate environments can be associated with a degree of reproductive maladaptation. For example, red deer and fallow deer of northern continental origin have frequently been translocated to Southern Hemisphere environments over the last century. Despite this period of acclimatization and the obvious successes in colonizing new habitats, reproductive patterns still strongly adhere to ancestral adaptations. Such reproductive seasonality has obvious beneficial consequences for the species within their traditional environment. However, translocation to more moderate, insular Austral environments has been associated with a degree of misalignment between reproductive seasonality and seasonal changes in feed availability. This has been particularly noticeable for deer farmed on pastoral environments in which peak feed production generally occurs 2 to 3 months before calving/lactation.3

With few exceptions, cervid species generally reproduce annually, irrespective of whether they are seasonal or aseasonal breeders. Therefore, variation between species in reproductive prolificacy largely reflects species differences in fecundity (e.g., ovulation rate, litter size). Some species are strictly monotocous (bear singleton offspring) and others are polytocous (capable of bearing multiple offspring). This divergence in reproductive productivity has been linked to the overall life strategies of the various species, based on the principles of “r” and “k” selection.4 In general, the monotocous “k-selected” species represent the larger-bodied, long-lived, later-maturing roughage feeders (i.e., grazers) and include most species within the genera Cervus (red deer, wapiti), Dama (fallow deer), Axis (chital deer), and Rangifer (reindeer, caribou). These species characteristically form stable populations within climax vegetation zones (e.g., grasslands). Although twinning has been recorded in these species, its incidence is generally below 1% of all births.

The polytocous “r-selected” species generally represent the smaller-bodied (moose are the obvious exception), shorter-lived, early-maturing selective browser/concentrate feeders and include most species within the genera Odocoileus (white-tailed deer, black-tailed deer, mule deer), Alces (moose), Capreolus (roe deer), etc. These species are characterized by their ability to rapidly infiltrate and populate disturbed habitats (e.g., seral vegetation communities) but are generally displaced within climax communities. In many such species, twins and triplets are the norm if environmental conditions (e.g., feed supply) favor investment into high reproductive rates (e.g., white-tailed deer, Odocoileus virginianus). These species also tend to be short-lived and are generally more susceptible to diseases than “k-selected” species.

The processes of estrus and ovulation are closely aligned, both physiologically and temporally, to ensure fertilization of ova. Recent studies of red deer, wapiti, and fallow deer have demonstrated that the temporal sequence of ovarian and endocrine events associated with estrus/ovulation share considerable similarity to those observed in other ruminant species.

The preovulatory period (up to 48 hours before ovulation) is characterized by a number of precisely orchestrated events: (1) the demise of luteal tissue (luteolysis) from a previous ovulation (often a “silent” ovulation, see later discussion) that causes a rapid decline in blood progesterone concentrations; (2) the emergence of a dominant estrogenic follicle that progressively secretes estradiol into the peripheral circulation; and (3) a subtle but perceptible change in the dynamics of pituitary secretion of luteinizing hormone (LH) in response to follicular estradiol secretion.

The onset of behavioral estrus in all species studied coincides with a marked elevation in plasma estradiol concentrations in the peripheral blood and the onset of the preovulatory LH surge (i.e., a massive, sustained increase in plasma LH concentrations that ultimately leads to follicular rupture/ovulation) (Fig. 125-1). It is highly likely that, as in other ruminants, secretion of estradiol by the emergent follicles attains a plasma threshold that instigates both estrus and the LH surge. Such elevations in peripheral blood have also been observed in white-tailed deer, reindeer, and axis deer. In fallow deer, in addition in increased estradiol secretion, a notable increase in plasma androstenedione concentrations has been observed at the onset of estrus. This weak androgen is also likely to be of follicular origin and may have a role in estrous behavior in this species. 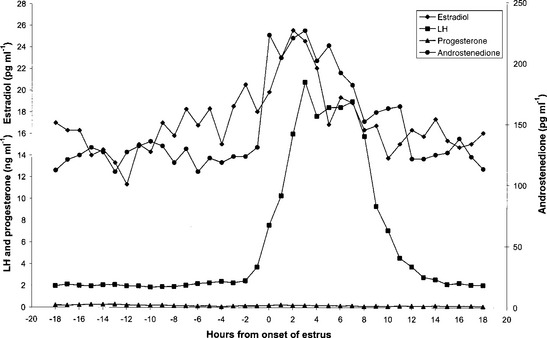 ), estradiol (♦), and androstenedione (•) around the onset of estrus of a fallow deer doe.

Although behavioral estrus is usually terminated at copulation (i.e., within a hour of onset) in studied cervid species, the preovulatory LH surge persists for ∼18 hours, reaching a peak 10- to 20-fold higher than basal values, 3 to 8 hours after the onset of estrus (see Fig. 125-1). The LH surge is a mandatory prerequisite for follicular rupture, which has been timed in both red deer and fallow deer to occur 24 hours after the onset of estrus/LH surge. This timing is in very close agreement with studies on sheep and cattle.

With few exceptions (e.g., roe deer), female cervids are polyestrous, and nonpregnant animals are capable of exhibiting either continuous estrous cycles (e.g., some tropical species) or, more commonly, alternating periods of estrous cyclicity and anestrus (Fig. 125-2). Estrous cycles have been characterized for a number of cervid species based on studies on recurrent estrous behavior and luteal secretion of progesterone in nonpregnant females (Table 125-1). 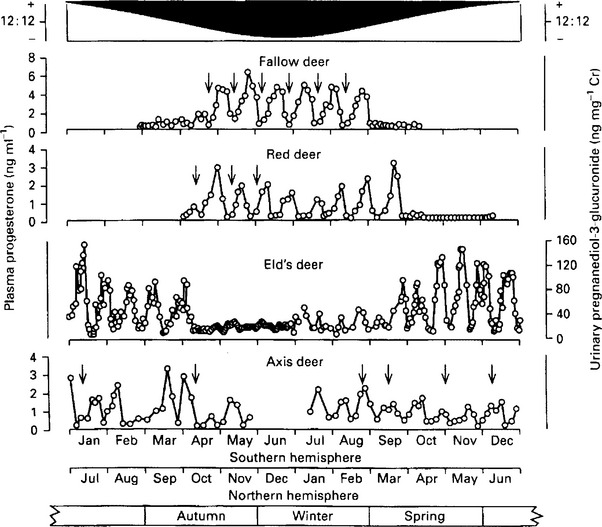 The estrous cycle consists of a number of discrete luteal events of highly specific duration. Although there is a high degree of similarity in luteal events among various cervid species, there are subtle variations in the time courses that give rise to differences in species–specific estrous cycle lengths (i.e., the interval between two successive estrous episodes) (see Table 125-1).

Luteinization of postovulatory follicles (i.e., luteal phase) is associated with increased secretion of progesterone, with maximal output occurring between days 10 and 16 of the estrous cycle (day 0 = estrus). In the absence of a preimplantation embryo, the new corpus luteum then undergoes luteolysis between days 16 and 23 in response to an interplay between luteal secretion of oxytocin and uterine secretion of prostaglandin F2α (as demonstrated for red deer, fallow deer, and reindeer). This causes a rapid drop in peripheral blood progesterone levels, leading ultimately to estrus/ovulation. Although absolute plasma progesterone concentrations during the estrous cycle vary among species (Fig. 125-3, A), the relative changes from day 0 are quite similar between species (Fig. 125-3, B). Average duration of the normal estrous cycle ranges from 17 days in some tropical species of deer to 18 to 20 days in red deer, 21 to 23 days in fallow deer, and 24 to 27 days in moose and black-tailed deer (see Table 125-1). The mean duration of the estrous cycle tends to increase progressively during the breeding season in red deer, fallow deer, and black-tailed deer. In a number of species occasional “long-cycles” (two to three times normal duration) have been observed, but their significance is unknown. 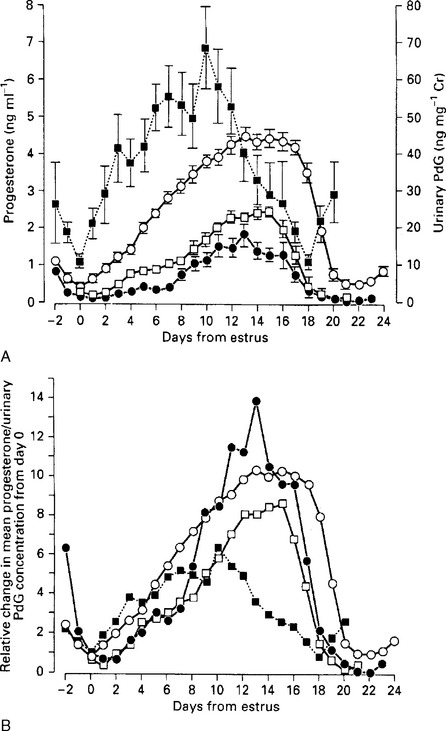 ). A, Mean (±SEM) values. B, The same data presented as relative change in mean concentrations from day 0.

The transition into the breeding season is characterized by “silent ovulations” (i.e., ovulations not preceded by overt estrus) and short-lived (8–10 days) corpora lutea in most species studied. In fallow deer, multiple successive silent ovulations leading up to the start of the breeding season have been observed. The transient nature of the preliminary corpora lutea may actually serve to promote within-herd synchrony of first overt estrus of the season.

When considering cervid estrous cycles it is important to maintain the perspective that continuous estrous cyclicity is not a normal phenomenon for most female cervids, particularly those species that exhibit highly seasonal breeding seasons. Although a return to estrus/ovulation following conception failure increases opportunities to establish a later pregnancy, evolutionary pressures for maintaining a highly synchronous calving season at an optimal time of year are very rigorous. The penalties, in terms of neonate death, for conceiving and calving later in the season are often high, particularly in harsh environments. Therefore, many seasonally breeding cervids exhibit exceptionally high rates of conception to their first estrus of the breeding season (∼85% in red deer and fallow deer), and subsequently terminate further ovulatory activity for the season.