Present-day alpacas and llamas developed from a common feral ancestry in South America during the last millennium. Many aspects of their reproductive pattern are similar but extrapolation from one species to another must be done with caution. Although differences in the reproductive biology have not been documented, few critical studies have been conducted to compare the various species of camelids. Breeding experiences and research with llamas and alpacas under different latitudes and lower altitudes such as those being carried out in Australia, Canada, and the United States may soon contribute to a better understanding of the biology of reproduction in llamas and alpacas.

GROSS AND ULTRASONOGRAPHIC ANATOMY OF THE FEMALE

The gross appearance of the female reproductive organs in the alpaca is illustrated in Figures 115-1 and 115-2. The dimensions of alpaca and llama reproductive tracts are compared in Table 115-1.1–3 The ultrasound appearance of the ovary is illustrated in Figure 115-3.4 The ovum itself is too small to be detected by present-day ultrasound instruments, but antral follicles as small as 1 to 2 mm in diameter can be detected. Several fluid-filled follicles (e.g., from four to eight), with or without a corpus luteum, may be detected in the ovaries at any given time. On ultrasound examination, the appearance of the llama or alpaca ovary is more similar to that of the cow than of the mare. The ovary and ovarian structures are, however, smaller than in cows (e.g., ovulatory-sized follicle, 10 mm versus 16 mm in diameter, respectively; mature corpus luteum, 13 mm versus 28 mm, respectively). As in the cow but not the mare, ovarian follicles are arranged in a peripheral cortex, and ovulation can take place at any spot on the surface of the ovary. The corpus luteum and large follicles protrude distinctly from the surface of the ovary in llamas and are readily palpable. On ultrasonography, corpora lutea are seen to have a very characteristic spherical shape and are hypoechogenic (dark gray) relative to the surrounding tissues. A horizontal echogenic (light gray) area traversing the center of the corpus luteum also is a distinctive ultrasonographic feature. The capability to ultrasonographically recognize and monitor the development of the corpus luteum is fortuitous because it allows confirmation of ovulation and is a rapid method of “progesterone testing.” 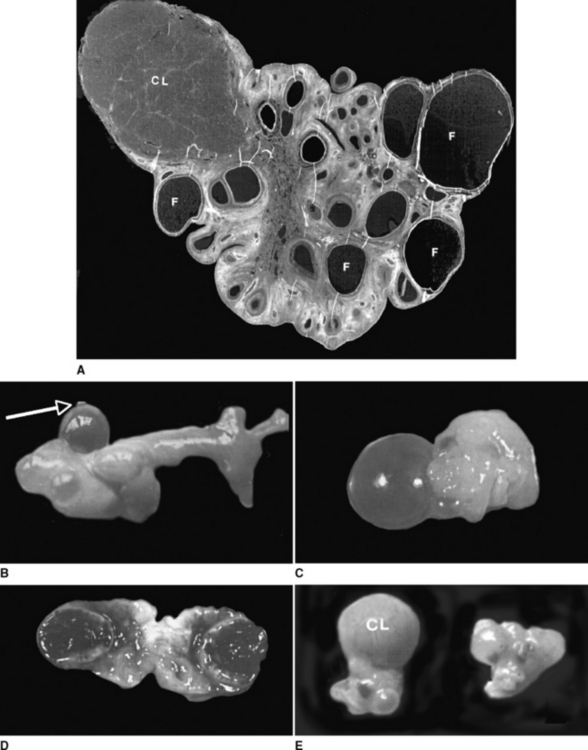 Fig. 115-2 Reproductive organs of the alpaca and llama. A, Craniolateral view of the suspended reproductive tract of an alpaca at slaughter showing the left and right uterine horns (lh, rh) suspended by the broad ligament (bl), the left and right ovaries (lo, ro), and the left oviduct (black arrow). B, Dorsal view of the excised tract of a llama. The uterine horns are relatively short, not tapered, and come to a blunt uterotubal junction, unlike in cows or ewes, in which the uterine horns are long and taper toward the uterotubal junction. 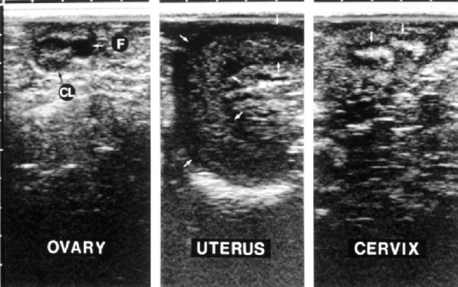 Fig. 115-3 Ultrasound images of the llama ovary, uterus, and cervix. Morphologic features are characteristic of the luteal phase:, a follicle and a corpus luteum in the ovary, curled uterine horn, and distinct cervical folds. The scale at the top is in 1-cm increments, and the images are in a sagittal plane with the cranial direction to the left.4

The oviducts are long and tortuous and end in an open bursa that normally covers the ovary. The tip of the uterine horns in both domestic species is blunt and rounded, unlike in other ruminants, in which it tapers slowly toward the uterotubal junction. Accordingly, the oviduct of alpacas and llamas opens into the uterine horns through a small, raised papilla, which acts as a well-defined sphincter. Even under great pressure it is not possible to flush liquids from the uterus into the oviduct, but flushing in the opposite direction is possible. As in other domestic species, the uterus of the alpaca and llama is bicornuate, but the left uterine horn is slightly longer than the right (7.9 ± 1.3 cm versus 7.4 ± 0.9 cm), even in the nullipara. 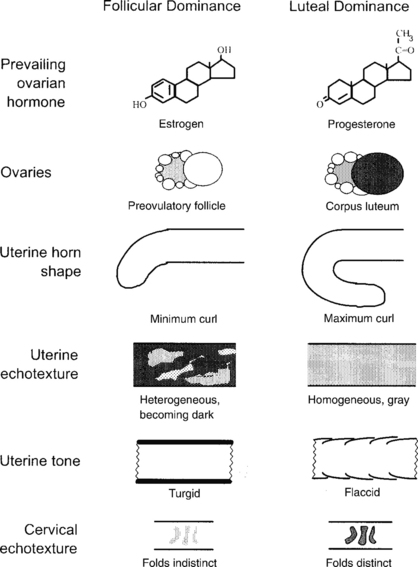 Fig. 115-4 Characteristic differences in the reproductive organs of alpacas and llamas during the follicular phase (receptive) versus the luteal phase (nonreceptive).4

The cervix has two or three irregular annular or spiral folds. On ultrasonography, the cervical folds appear as transverse echogenic bands and are especially prominent during the luteal phase and pregnancy (see Fig. 115-4). Presumably, edema of the cervical folds during the follicular phase is responsible for the dark echotexture and indistinct appearance on the sonogram characteristic of this phase. The vagina is surprisingly long and commonly exceeds 20 cm.

ANATOMY OF THE MALE

In the adult alpaca, the testes are found in a nonpendulous scrotum in the perineal region 5 to 9 cm ventral to the anus.1,6 The testes are small and elliptical and positioned so that the long axis is oriented vertically or in an oblique dorsocaudal orientation. Normally, both testes are of the same size and of a firm consistency, with free movement inside the scrotum. The head, body, and tail of the epididymis are small and firmly connected to the testes. The average weight of one fully developed alpaca testis is approximately 17 g (range, 13 to 28 g), measuring between 4 and 5 cm in length and 2.5 to 3.0 cm in depth.7 Considerable variation, however, has been found in testicle size and liveweight in alpacas. In one study, male llamas that reached the age of 2 years (83 kg of body weight) had testes weighing about 12 g, with dimensions of 3.5 × 2.2 cm and a volume of 13 cc. At the age of 5 years, llama testes weighed about 24 g, with dimensions of 5.0 cm × 2.7 cm and a volume of 22 cc.9 In another study,10 body weight and testicular index increased linearly from birth to 24 months of age, with a subsequent slower increase to adulthood. A positive relationship was found between age and testicular index (R2 = 0.88).

The deferent duct (ductus deferens) is very thin (2 mm) at its beginning and thickens (3 mm) when it reaches the abdominal cavity and ends near the bladder, forming what in other species is the ampullae.14 The prostate consists of a clearly defined body at the neck of the bladder, and a disseminate part along the pelvic urethra. The prostate body measures approximately 3 cm × 2 cm and is easily palpable per rectum in the adult. The bulbourethral glands are oval and are located on either side of the urethra at the pelvic outlet. Camelids have no vesicular glands.

The penis is fibroelastic, with a small (approximately 1 cm across) cartilaginous process that has a hooklike curve at its tip (Fig. 115-5). The length of the nonerect penis in the alpaca is 26 cm, and the sigmoid flexure is prescrotal.6 The prepuce is small, located approximately 15 cm caudal to the umbilicus, and has a triangular opening that is oriented caudally.1 During urination, camelids direct the stream of urine backward between the hind legs. The protractor preputial muscle pulls the prepuce forward before mating, changing the direction of the preputial opening and thus allowing for the penis to be directed forward. 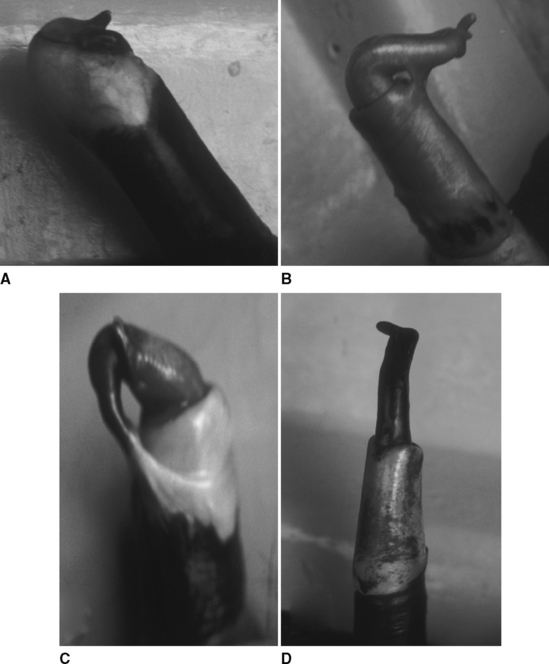 Young female alpacas of 12 to 13 months of age display behavioral estrus similar to that in adult alpacas.11 A majority of females display sexual receptivity at 12 months of age even though ovarian activity begins at 10 months of age, with the presence of follicles of 5 mm or more in diameter. In a study carried out in southern Peru using 280 yearling alpaca females,12 a highly significant relationship (P < 0.001) was found between body weight at mating and subsequent birth rates. For each kilogram increase in body weight up to 33 kg, a 5% increase in natality was observed; for increases in excess of 33 kg, the percentage of nonpregnant females was relatively independent of body weight. In traditional Peruvian production systems, only about 50% of yearling alpacas reach a body weight of 33 kg at mating time (January through March). Therefore, breeding age is postponed to 2 years of age and often to 3 years of age in llamas. It also has been shown that with better nutrition after weaning (7 to 8 months of age), nearly 100% of yearling alpacas can reach 33 kg body weight.13

In males, the penis is completely adherent to the prepuce at birth. Under the influence of testosterone, the adhesions disappear gradually as the male matures.6,7 At 1 year of age the males show sexual interest in the females, but only about 8% of alpaca males have complete liberation of penis-prepuce adhesions and are capable of copulating. At 2 years of age, approximately 70% of the males are free of adhesions, and 100% are free at 3 years of age (see Fig. 115-5). Puberty, based on penis-prepuce detachment, is attained at an average of 21 months of age (range, 9 to 31 months) in llamas, at a body weight of 70 kg (range, 48 to 92 kg).10 Also, testosterone concentration starts to increase exponentially at 21 months of age (to 300 pg/mL), reaching a plateau at 30 months of age (650 pg/ml).9,10 From 2 to 11 months, the testes grow slowly (infantile stage), with a sequential increase of noncanalized sex cords and undifferentiated Leydig cells.14 At an age of about 12 months, the sex cords start to develop a distinct lumen containing Sertoli cells and spermatogonia. The first spermatozoa appear at about 18 months of age, with half of the animals having spermatozoa in the caput epididymidis. From 18 months, the number of Leydig cells increases considerably, and by 20 to 24 months, the diameter of the tubules is greatly increased, with presence of considerable numbers of spermatozoa in the caput epididymidis. Beginning at 3 years of age, normal alpacas have spermatozoa in the epididymis. Spermatogenesis is initiated in some alpacas as early as 16 months and in others as late as 26 months.59 The general practice in Peru is to start using the males for breeding at 3 years of age.