Ovarian follicular cysts (cysts) are anovulatory follicular structures that persist for various periods of time and have been found in a number of mammalian species.1 Cysts in most cases are larger than normally developing follicles; however, cysts also may be similar in size to ovulatory follicles. Cysts have traditionally been defined as follicular structures of 2.5 cm in diameter or larger that persist for a variable period in the absence of a corpus luteum (Fig. 47-1). More recently, a diagnosis of ovarian follicular cyst was based on a diameter of 17 mm or larger, particularly if more than one follicular/cyst structure was present.2, 3 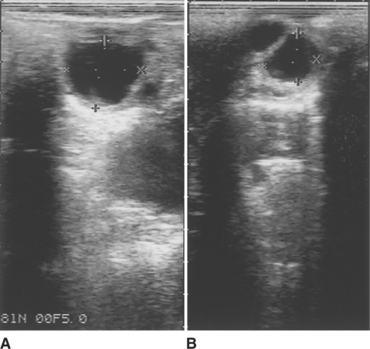 The condition affects approximately 10% of dairy cows annually and is a serious cause of infertility in dairy herds. Occurrence of cysts is less frequent in beef cows, but cysts have become more prevalent in recent years. Cows generally are infertile so long as the condition persists. In our experience, the calving interval is about 50 days longer in cows diagnosed with cysts than in cows without postpartum abnormalities. Cystic ovaries, ovarian cysts, and cystic ovarian degeneration all are terms that have been used synonymously with ovarian follicular cysts.

This chapter describes ovarian cyst dynamics and reviews the etiology, diagnosis, treatment, and management of cysts in cattle.

With the development of real-time ultrasonographic technology, ovarian follicular changes during the bovine estrous cycle have been well characterized (follicular dynamics and mechanisms controlling follicular growth and development are reviewed elsewhere4–9). The bovine estrous cycle is characterized by growth of follicular waves, usually two or three per cycle. After ovulation subsequent to estrus, a cohort of follicles (usually 3 to 5) is recruited, and these follicles grow to be greater than 5 mm in diameter. Growth continues for approximately 2 days until the follicles reach approximately 8.5 mm in diameter. From the cohort, one follicle is selected to continue growth and become dominant over the other follicles.10 The fate of the other follicles in the cohort is atresia. If luteal regression occurs during the growing phase of the dominant follicle, that follicle continues growth and ovulates. If luteal regression does not occur during the growth phase of the dominant follicle, the dominant follicle undergoes atresia. Luteal regression usually occurs during the growth phase of the second- or third-wave dominant follicle. Initiation of each wave of follicular growth is preceded by a transient increase in circulating follicle-stimulating hormone (FSH). Initiation of each wave occurs in the absence of a dominant follicle that secretes estradiol and inhibin.

Ovarian follicular cysts have been described in the literature since the mid 1800s.11 It was long assumed that most cysts were static structures that persisted for extended periods of time. As indicated by the findings outlined in the previous section, the classic definition of static cystic structures was not consistent with the dynamic nature of follicular growth and atresia. Kesler and associates reported short- and long-term changes in cystic structures and circulating reproductive hormone concentrations that suggested that cysts were not static structures.12 None of the cows in that study resumed ovulatory ovarian cycles, but cysts appeared to regress and were replaced by new structures in some cows.

Recent studies have shown that cysts are indeed dynamic, with three potential outcomes.1, 10, 13–17 In some instances, cysts persist for extended periods (up to 70 days) and remain dominant over the others; growth of additional follicular waves is inhibited by estradiol and inhibin secreted by the active cyst. Two other responses also have been demonstrated10, 13: The original cyst may regress and be replaced by a new follicular structure that ovulates. Such self-correction occurs in approximately 20% of cows with cysts.18 The lifespan of most cysts, however, is characterized by turnover whereby the original cyst decreases in size and is replaced by a new follicular structure that develops into a new cyst. With the occurrence of cyst turnover, intervals between follicular/cyst waves are longer and more variable in cows with cysts (13 days) than in cows with normal estrous cycles (8.5 days).

Follicular growth dynamics during development of cysts is similar to recruitment, selection, and dominance of ovulatory follicles during normal estrous cycles.10 That is, recruitment of a cohort of follicles (usually 3 to 5) is initiated by a transient increase in circulating FSH. The cohort continues to grow until follicles reach 8.5 mm in diameter; then, selection and dominance of one follicle occur. When the dominant follicle reaches ovulatory size, however, ovulation does not occur, and growth of the dominant follicle continues for several additional days and a cyst develops. The growth rate of follicles that develop into cysts is similar to the growth rate of normal dominant follicles.10 Cysts that are dominant over other follicular structures (other follicular growth inhibited) are steroidogenically active (producing large amounts of estradiol) and are morphologically healthy. When cyst turnover occurs, a new wave of follicular growth is initiated (with recruitment, selection, and dominance of the new wave). Thus, the original dominant cyst has lost dominance (nondominant cyst). Observation of nondominant cysts has shown that they are not steroidogenically active (low levels of estradiol and androstenedione) and have a morphologic appearance similar to that of atretic follicles. Granulosa cell layers have thinned or are missing.19 Growth of follicles that developed into cysts and follicular dynamics of waves of follicular/cyst growth are therefore similar in many aspects to those in cows with normal estrous cycles.

It was suggested in the early literature that cysts probably result from an excess of secretion of FSH and an insufficient amount of luteinizing hormone (LH). Subsequently, however, two studies from the 1990s showed no difference in serum concentrations of FSH in cows experiencing development and maintenance of cysts and in normal control animals.10, 13 By contrast, mean serum concentrations of LH are nearly twice as high in cows with cysts as in control animals. Pulsatile secretion of LH during cyst growth and development is characterized by high pulse frequency and high pulse amplitude. A preovulatory-like surge of LH, however, is not detected in cows with cysts. Concentrations of LH in serum of cows that spontaneously recover without exogenous treatment are intermediate between those in control animals and those in cows that develop cysts.10 Infusion of LH at levels that mimic circulating levels in cows with cysts into cycling of postpartum dairy cows did not result in induction of development of cysts.20 Thus, increased pulsatile secretion of LH alone is not sufficient to induce cysts.

Another characteristic of cows with cysts is the lack of an LH surge when follicles reach ovulatory size.10, 13 In addition, exogenous treatment in cows with cysts with estradiol fails to induce an LH surge in some cows, and the LH surge is delayed in other cows with cysts that did exhibit an LH surge.21 In two different studies, ablation of follicles followed by an estradiol-induced LH surge with no dominant follicle present was followed by development of large follicles that resembled cysts.22, 23 In those studies, treatment of the cows with cysts with exogenous progesterone was followed by development of a large follicle that ovulated. Thus, cows with cysts appear to be refractory to the stimulatory effects of estradiol on the gonadotropin-releasing hormone (GnRH) surge center; the lack of responsiveness of the GnRH surge center is associated with development of cysts. This observation is consistent with the observation that successful treatments for cysts involve exposure of the cow to progesterone (see later “Treatment” section). Exposure to either exogenous or endogenous progesterone decreases tonic secretion of LH and restores hypothalamic responsiveness to estradiol.