Ionophores are a class of naturally occurring antimicrobial drugs with a wide range of activity. These polyether acid ionophore antimicrobials are produced by the Actinomycetales order of filamentous bacteria. These drugs are widely used to control or prevent coccidian parasite infestation in the intestinal tracts of poultry, cattle, and pigs. Ionophores have a beneficial side effect of helping to maintain balance in the intestinal bacterial populations during periods of high-volume concentrate (e.g., corn, grain) feeding. This effect results in a more efficient feed–to–body weight gain ratio. Greater feed efficiency translates to improved economic returns for the meat producer.

These drugs are referred to as ionophores because their mechanism of action involves interference with ion exchanges at the cell membrane. Specifically, these drugs are open-chained oxygenated heterocyclic rings with terminal carboxyl groups. This structure allows the drugs to form lipid-soluble complexes with ions such as calcium (Ca++), potassium (K+), sodium (Na+), and magnesium (Mg++). These complexes cause ion fluxes independent of ion channels and membrane potentials, causing decreased adenosine triphosphate (ATP) production, increased ATP utilization, and eventually cell death.

These drugs have a particular predilection for striated muscle cells because of the high concentration of calcium ions and extreme activity involving movement of ions. Thus, overdosage of ionophores most often causes clinical signs associated with skeletal muscle dysfunction and myocardial dysfunction.5

Intoxication with ionophores through accidental overdosage has been reported in the target species for which the products are approved, as well as a wide variety of nontarget species (e.g., horses, cattle, sheep, turkeys, pigs, dogs, cats, rabbits, white-tailed deer, guinea fowl, ostriches, chickens, camels, alpacas).5,6 Differential species sensitivity to ionophores has been recognized and varies with each ionophore. The ionophores most frequently involved in accidental toxicoses are monensin, lasalosid, and salinomycin (Table 5-1). 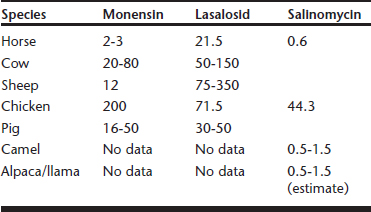 Most often, poisonings are caused by feed-mixing errors, accidental contamination of feed, or approved products being fed to inappropriate species. Toxicity may occur from ingestion of single large dosages or from multiple feedings of smaller dosages. Ionophores have variable bioavailability but wide volume of distribution in the body. These antimicrobials are metabolized in the liver by glutathione and cytochrome P-450 enzyme pathways. Ionophores are rapidly eliminated by biliary secretion with no renal clearance; thus postmortem analysis of tissues, urine, and intestinal contents usually is unrewarding. Age may have some effect on sensitivity to ionophores. Adult turkeys are more susceptible to toxicity than young stock.7 Young turkeys may tolerate continuous feeding of 40 parts per million (ppm) or more, but adults may succumb to feeding rates as low as 15 ppm. A number of drug interactions have been identified with ionophores. Salinomycin toxicity is increased when fed in combination with dihydroquinolone antioxidants or tiamulin.

Environmental impact of ionophores is not well described. Ionophores are absorbed rapidly from the gastrointestinal (GI) tract and quickly metabolized by the liver and GI tract. Elimination half-life is approximately 2 to 3 hours, and more than 90% of the drug is excreted in the feces within 48 to 72 hours of ingestion. Salinomycin breaks down in feces over 21 days. Ingestion of contaminated feces in amounts required to intoxicate an animal is extraordinarily unlikely.

A group of 120 dromedary camels received one feeding of 2 to 4 kg each of a pelleted diet that had been accidentally contaminated with 138.9 ppm salinomycin.8 This translates to a dosage of salinomycin between 0.7 and 1.4 mg/kg body weight. Within 24 hours, 25 camels had weakness and incoordination, which progressed to recumbency within 4 to 6 hours. Within 48 hours, 50 camels were affected, and one had died. Subcutaneous edema and myoglobinuria were noted. Camels demonstrated excessive lacrimation and stiff gait. Over 10 weeks, all 120 camels showed clinical signs, and 58 died (i.e., 100% morbidity; 48% mortality). Most (80%) of deaths occurred within 2 weeks of the feed contamination. The last recorded death occurred 5 weeks after the single ingestion of salinomycin.

In a pilot study of four young camels, two served as controls, with a diet of 138 ppm salinomycin fed to one and a diet containing 20 ppm of monensin fed to the other. The salinomycin induced anorexia, ataxia, and difficulty rising within 36 hours. The monensin caused anorexia within 36 hours and difficulty rising 72 hours after feeding. In the salinomycin camel, CK rose to 2580 U/L at 48 hours and 146,000 U/L after 8 days. The monensin-fed camel had CK of 459 U/L on day 5 and 53,900 U/L on day 8. This accidental poisoning and toxicity trial suggest that camels are sensitive to salinomycin in the range of 70 to 105 mg/kg body weight as a single dose. No long-term follow-up was available to assess survival or fertility effects.

In 2003, a death and illness outbreak was observed in approximately 10 herds of alpacas in the north-central region of Ohio.4 Several farms of alpacas, Huacaya and Suri breeds, were fed a diet that had been accidentally contaminated with salinomycin at a concentration of 60 to 90 ppm. Alpacas had been offered the diet at a rate of approximately 0.25 to 0.5 kg per head per day for 3 to 5 days (daily dosage, ∼0.5-1.5 mg/kg body weight; accumulated dosage, ∼1.5-7 mg/kg). Alpacas demonstrated rhabdomyolysis, weak tail tone, incoordination, and difficulty urinating beginning on day 3 of feeding. By day 4, acute deaths were noted, and continued for at least 21 days after discontinuation of contaminated feed. During the first 5 days of the clinical period (days 4 through 8 after initiating feed; days 1 through 5 after removing feed), acute rhabdomyolysis and acute death were the dominant clinical syndrome. These alpacas developed muscle tremors, weakness, ataxia, exercise intolerance, diarrhea, anorexia, depression, recumbency, or acute death. After day 5 of treatment, myocardial injury, cardiopulmonary failure, and death were the dominant syndrome. These alpacas demonstrated weakness, nasal flaring, dyspnea, tachypnea, anorexia, exercise intolerance, and acute death. Deaths associated with cardiac disease (myocardial fibrosis) were seen up to 2.5 years after the feed ingestion.