The veterinarian needs to be aware of the possibility of an intersex horse and to use good investigative clinical skills for identification of the intersex horse. In Pennsylvania, two Standardbred race horses that had won races as mares were found to have serum testosterone concentration above the limit for female racehorses. Following a thorough diagnostic workup, which included ultrasound, karyotype, cytogenetic analysis, and a complete physical examination, the intersex horses were identified (Knobbe et al. 2011).

Laparoscopic surgery is a useful adjunct in the diagnosis and therapeutic intervention in the intersex horse. This diagnostic tool allows the ability to visualize the genital tract for the identification of the abnormal anatomy. Laparoscopic surgery was first performed in 1976 for the diagnosis of nonpalpable testes (Gad El Moula et al. 2008). The advantages of laparoscopic surgery include fewer complications, decreased time off work following the procedure, and increased visibility compared to open laparotomies. Other advantages of this technique include elimination of general anesthesia, increased observation, accurate placement of staples or ligatures, and accurate assessment of hemorrhage after transection. Laparoscopy is an excellent tool for the diagnosis and treatment of intersex cases because it is minimally invasive, allowing visualization of the gonads for performing an orchiectomy or an ovariectomy (Gad El Moula et al. 2008).

There are few contraindications related to diagnostic or therapeutic laparoscopic gonadectomy. The complications that do exist are similar for laparoscopy in general and for the procedure that is performed. Other contraindications to consider when choosing the procedure are a “high-spirited,” anxious horse in standing procedures; not having enough available skilled staff; inappropriate facility; and surgical instrumentation.

Laparoscopic gonadectomy can be performed in both the standing and dorsally recumbent positions. The decision depends on the horse’s behavior, the ability to withstand general anesthesia, and the surgeon’s preference (Smith et al. 2005). Once the decision for surgery has been made, the horse is prepared for surgery. The workup includes history, physical examination, and appropriate screening blood work such as a CBC and chemistry panel. Horses are held off feed or placed on a low residue diet for 24–72 hours before surgery to decrease the digesta in the gastrointestinal tract to optimize visualization and manipulation (Ragle 2000).

Preoperatively, medications include procaine penicillin G (22,000 U/kg, intramuscularly [IM]), gentamicin (6.6 mg/kg, IV), and flunixin meglumine (1.1 mg/kg, IV). The type of anesthesia administered is determined by the operative positioning (standing vs. dorsally recumbent). Standing laparoscopic surgery will require sedation and local anesthesia of the flanks. Sedation can be performed with either continuous infusion of IV detomidine (20 mg detomidine HCl in 1 L polyionic replacement fluids given to effect), bolus detomidine HCl as needed, and as a detomidine epidural (40 ug/kg of detomidine hydrochloride diluted in 0.9% sterile saline solution to a final volume of 10–15 mL) (Hendrickson 1999; Dechant & Hendrickson 2000). Additional intravenous sedation is usually not required (Dechant & Hendrickson 2000). Additional anesthesia of the flank can be accomplished with an inverted L pattern or a block at the site of the portals using 40–60 mL of 2% lidocaine or 2% mepivacaine (Fischer et al. 1986; Hendrickson & Wilson 1996; Hendrickson 1999). For the standing laparoscopy, the horse is restrained in the stocks with the tail tied and the head supported (Dechant & Hendrickson 2000) (Figure 16.2). The flanks are clipped, prepped, and draped for access to both flanks.

Figure 16.2 (A) Photograph of a horse standing in stocks in preparation for a laparoscopic gonadectomy. (B) Close-up of the head with eye covering being suspended from the stocks after sedation.

For dorsally recumbent surgery, the horse is anesthetized and placed into dorsal recumbency. Positive-pressure ventilation is used during the surgery (Ragle 2000). The horse is aseptically prepared and draped for abdominal surgery. To prevent the horse from slipping during the surgical procedure, the tail is secured to the operating table and/or a rope is placed across the chest (Figure 16.3) (Ragle 2000). To optimize visualization, a urinary catheter is placed (Ragle 2000). The intraoperative monitoring should include the arterial blood pressure, arterial blood gases, end tidal carbon dioxide tension, and electrocardiography (Ragle 2000).

Figure 16.3 Photograph of a horse in dorsal recumbency while in a Trendelenberg position. 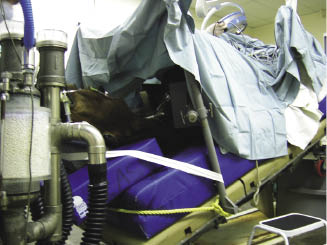 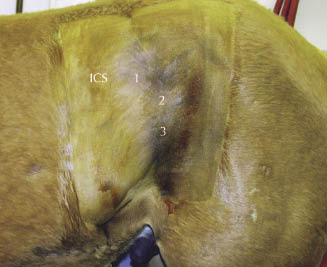 One technique for portal position in the recumbent “male” equine urogenital endoscopic surgery is to place a 1-cm skin incision at the level of the umbilicus where the laparoscope will be positioned (Figure 16.5) (Wilson 2000). Intra-abdominal placement is confirmed with the hanging drop technique (Wilson 2000). Once intra-abdominal placement is visually confirmed, a 10- to 11-mm-diameter, 10- to 15-cm-long cannula is placed 10 cm lateral to the midline and 10–15 cm cranial to the external inguinal ring on each side (Wilson 2000). Placement of the other cannulas is performed under direct visualization.

Figure 16.5 Photograph of a horse in dorsal recumbency with abdomen prepared for laparoscopic surgery. U, umbilicus and position for telescopic portal; I, instrument portals. 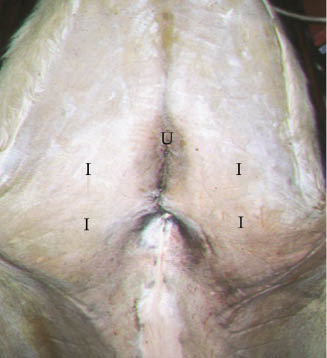