Figure 1.2 Diagram of Antonin Desormeaux’s endoscope of 1853. A lamp fueled by turpentine and alcohol provided the artificial light that was focused and directed through the speculum. 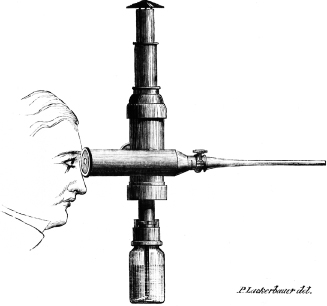 The first endoscope with an internal light source was the invention of a German dentist, Julius Bruck, in 1867 (Figure 1.3) (Rosin 1993). The light source was an electrically heated platinum wire, which provided improved illumination but generated considerable heat. The potential for tissue burns induced by the instrument was reduced with the addition of a circulating water jacket. Maximilian Nitze, a German urologist, and his colleagues are generally credited with the development of the first rigid telescope in 1879, an instrument equipped with a series of lenses and a light source based on the design of Bruck (Figure 1.4) (Nitze 1879). Following the invention of the incandescent bulb by Thomas A. Edison in 1880, it was incorporated into a telescope developed by the Glaswegian David Newman in 1883 (Dameword 1992). Further developments in lenses and miniaturization of incandescent light bulbs fostered additional advances so that endoscopy of the upper airway, lower urogenital tract, esophagus, stomach, and anorectum began to be conducted with some frequency. Although the thoracic and peritoneal cavities were yet to be examined, the equipment and methodology to do so was largely in place (Lau et al. 1997).

Figure 1.3 Illustration of the internal light source invented by Julius Bruck in 1867. An electrically heated platinum wire created both light and heat. Excessive heat was managed by the addition of a water cooling jacket.

Figure 1.4 A diagram of the rigid telescope invented by Maximilian Nitze in 1879. The original light source was based on the design of Bruck.

In 1901, the abdominal cavity of a pregnant woman was examined by Dimitri von Ott, who employed a speculum introduced into the abdominal cavity via small colpotomy. External light was reflected into the speculum with a head mirror, a technique he called “ventroscopy” (Von Ott 1901). While his efforts presaged Natural Orifice Translumenal Endoscopic Surgery (NOTES®) procedures, it is not regarded as laparoscopy in the conventional sense by many medical historians. Priority for “true” laparoscopic examination of the abdomen is afforded the German surgeon Georg Kelling, who used a Nitze-style cystoscope to examine the peritoneal cavity of dogs in 1901. Kelling created pneumoperitoneum with filtered air and called the technique “koelioskopie” (Figure 1.5) (Kelling 1902; Rosin 1993). Although Kelling later reported the use of laparoscopic methods in a series of human patients, Hans Christian Jacobaeus, a Swedish surgeon, is credited with the first report of a relatively large series of “laparothorakoskopie” procedures in people, published in 1911 (Jacobaeus 1911). Unlike Kelling, Jacobaeus did not use abdominal insufflation; however, many of his patients had ascites, which afforded working space. As is typical in medicine, progress tends to occur in parallel; an American surgeon, Bertram Bernheim, also reported on two laparoscopically managed patients in 1911 (Bernheim 1911). Evidently, enthusiasm for the concept of laparoscopy spread rapidly in the ensuing years; a 1925 literature review by Nadeau and Kampmeier documents extant methods in some detail and references no fewer than 42 publications (Nadeau & Kampmeier 1925). Milestones and personalities associated with the development of laparoscopy in humans and horses from the time of Kelling’s work are illustrated in Figure 1.6.

Figure 1.5 Georg Kelling, a German surgeon, is generally credited with the first “true” laparoscopy. He published on the use of a Nitze-style cystoscope and filtered air insufflation to examine the abdominal organs of dogs in 1901. 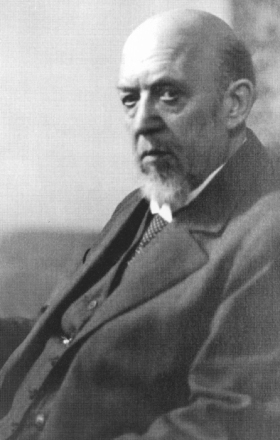 Figure 1.6 Timeline of landmarks and personalities associated with selected developments in laparoscopic surgery in humans and horses from the time of Kelling’s work in the early twentieth century. 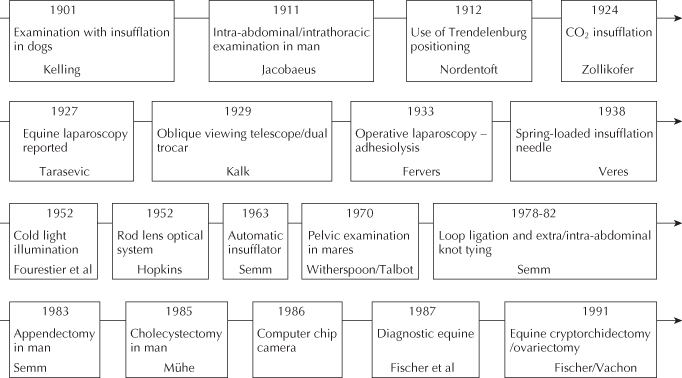 A number of technical improvements in endoscopy were realized in the early twentieth century. Laparoscopic examination of pelvic organs was improved by the adoption of Trendelenburg positioning, the subject of a report by the Danish surgeon Severin Nordentoft in 1912 (Nordentoft 1912). Advances in instrumentation included the invention of a needle to establish pneumoperitoneum (Korbsch 1921), the introduction of insufflators (Goetze 1921), and optical improvements in telescopes (Unverricht 1923). The use of CO2 as an insufflation gas was introduced by Zollikofer in 1924 (Zollikofer 1924), and the first operative laparoscopy is attributed to the German laparoscopist Carl Fervers, who conducted laparoscopic liver biopsies and lysed abdominal adhesions under direct observation (Gotz et al. 1993).

A number of individuals pioneered further technical and operative innovations in the discipline. Among them was the hepatologist Heinz Kalk, who introduced oblique-viewing telescopes and a variety of hand instruments and devised the use of a second operative (instrument) portal as early as 1929 (Kalk 1929). In the period between 1929 and 1959, Kalk published over 20 papers on laparoscopy, including a monograph on laparoscopic surgery with W. Bruhl in 1951 (Kalk & Bruhl 1951). Many consider Kalk the father of modern laparoscopy (Figure 1.7). In 1938, Janos Veres (frequently incorrectly spelled Veress), a Hungarian physician, improved on existing pneumoperitoneum needles by inventing one equipped with a spring-loaded obturator to reduce injuries to abdominal viscera when establishing pneumoperitoneum. The eponymous insufflation needle remains in use today (Veress 1938).

Figure 1.7 Heinz Kalk, considered by some as the father of modern laparoscopy. 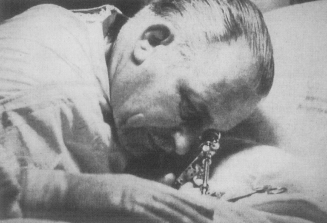 A revolutionary development was the introduction of cold light fiberglass illumination, the product of the efforts of French scientist Max Fourestier and his colleagues in 1952 (Fourestier et al. 1952). This advance both decreased the risks of burns associated with previous methods of illumination and provided sufficient light to enhance the quality of endophotography. The contribution of Fourestier and his colleagues, combined with the development of a more robust and optically much improved rod lens system by the English physicist Harold Hopkins, opened new vistas in endoscopy and laparoscopy (Hopkins & Kapany 1954). In addition to virtually eliminating the pervasive risk of burns from previous light sources, there was now the capacity to enjoy a wider and more optically correct field of view. The work of Hopkins and his coworkers formed the basis for flexible fiber-optic endoscopes and modern rigid laparoscopes.

Among the greatest innovators in the development of modern laparoscopy was the German engineer and surgeon Kurt Semm. Indeed, his contributions are largely responsible for the current trend for minimally invasive surgery (Spaner & Warnock 1997). The development of the automatic insufflator, the morcellator, a variety of hand instruments, the ligating loop, and techniques for extracorporeal knot tying and intracorporeal suturing are all attributable to Dr. Semm. Additional contributions include advancing surgical techniques for tumor staging, adhesiolysis, and applications for bipolar electrocautery. He also invented a laparoscopic training device, the “pelvitrainer.” Semm published extensively and a number of his gynecologic procedures appear in a surgical atlas on “pelvicoscopy” in a number of languages (Semm 1992). With this staggering list of accomplishments, it is not surprising that Semm earned his share of habitual detractors (Litynski 1996a). Indeed, though his principal professional interest was gynecologic surgery, he conducted the first laparoscopic appendectomy in 1980 (Semm 1989), and the presentation of his work was met with such opposition that it was not published until 3 years later (Vilardell 2006).

Despite important developments in electrocautery equipment and other advances, the growth of laparoscopy in general surgery was tentative through the 1960s and 1970s. In September of 1985, Erich Mühe, in a private hospital in Böblingen Germany, conducted the first laparoscopic cholecystectomy using a “galloscope” of his own design (Litynski 1996b; Lau et al. 1997). Mühe’s lack of enthusiasm for publication resulted in limited awareness of this accomplishment, and the first laparoscopic cholecystectomy is often attributed to Phillipe Mouret, a general surgeon from Lyon, France, in 1987 (Nagy et al. 1992; Gotz et al. 1993; Spaner & Warnock 1997). The laparoscopic cholecystectomy was an important advance; it was rapidly adopted by a number of centers in several countries, and very soon after, laparoscopic surgery became the subject of avid study the world over. The surprisingly rapid recovery of patients undergoing laparoscopic cholecystectomy and other innovative, minimally invasive biliary tract procedures, combined with the development of computer chip television cameras in 1986, set the stage for the subsequent explosive growth of the discipline in human surgery (Berci 1994). In the next few years, a wealth of procedures in diverse body systems was developed, and it is now difficult to enumerate the laparoscopic operations that are routinely conducted in human hospitals everywhere. The list continues to grow as technological advances such as advanced bipolar cautery, imaging systems, and robotics have gained widespread acceptance.

In many respects, the history of the origins and progress in diagnostic and surgical laparoscopy among equine veterinarians has paralleled that of human medicine. While equine laparoscopy may have been attempted previously, the earliest published account dates to 1927 (Tarasevic 1927). As in man, the first reports pertain to the examination of the reproductive organs. Witherspoon and Talbot reported on the use of laparoscopic examination to supplement other methods for the study of the ovulation pattern of mares in 1970 (Witherspoon & Talbot 1970). Laparoscopy was also used for diagnostic and therapeutic purposes in the reproductive tract of mares by Heinze and his colleagues in the early 1970s (Heinze et al. 1972; Heinze 1975). Subsequent reports of equine laparoscopy were rather sporadic until the mid-1980s, although Witherspoon et al. contributed a chapter on equine laparoscopy to a seminal text on veterinary laparoscopy in 1980 (Figure 1.8) (Witherspoon et al. 1980).

Reproduced with permission from Williams and Wilkins. 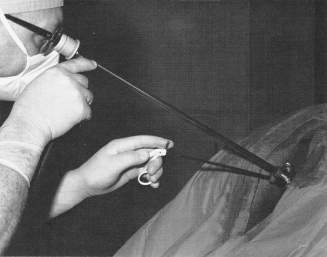