The various grooming behaviors are important to a normal healthy cat. The lack of these behaviors can indicate depression or ill health. Their absence may also signal the potential for ectoparasite infestation or secondary conditions.

Newborn kittens depend on the dam for grooming, especially during the first few days of life. Her licking not only conditions their coats but also stimulates urination and defecation until the young are physically able to move to a special area to eliminate. This reflex control of eliminations keeps both the nest and the kittens clean. As motor skills mature, the kittens begin self-grooming, but it is incomplete and awkward at first.

As the cat matures, grooming becomes increasingly significant, until up to 50% of the awake time, or 15% of a 24-hour period, is spent performing some type of this behavior.18,22,32 Variations do exist, probably as a result of early experience, genetic factors, and hair coat, with long hair needing more attention.

Grooming serves several purposes, with the most important probably being maintenance of healthy skin. Body hygiene is apparently learned early, because kittens that are not well cared for develop into unkempt adults more often than those with normal histories. Although hair is shed by normal cats year-round, losses are heaviest in the spring, when the cat is ill, or when it is staying in dry indoor heat. The hair between the eye and ear is normally thinner than that on other parts of the body but during shedding may almost disappear. Siamese cats may appear to almost lose their mask.10 Removal of loose hair is necessary to keep the coat unmatted and free from dander. Grooming is also important to minimize ectoparasite infestations. In a flea-infested environment, prevention of oral grooming will result in twice the number of fleas and a scratch grooming frequency seven times higher than in a control group.17

In hot weather, as much as one third of the cat’s evaporative cooling losses can be achieved by licking the skin and hair.22 Another function of grooming is that of an affiliative behavior between two cats. Last, it can relieve tension, as may occur after a reprimand from the owner, after an encounter with a very aggressive cat, or preceding a thunderstorm.21 Some evidence suggests static electricity may build in the cat’s fur, so licking would also tend to defuse the charge and the tension.

Each type of grooming has an appetitive and a consummatory phase. The former phase is made up of the orienting components that direct the animal’s attention to the affected body surface. The consummatory phase completes the response and consists of the lick, bite, or scratch.51 Normal tactile stimulation to the cat’s body results in either grooming of the region, or more commonly, no response.51

The cat grooms much of its body with its tongue or teeth. Licking as a form of grooming usually appears near the beginning of the kitten’s second week with attempts at licking the forepaw. Within a few days, the kitten is licking the rest of its body. The caudally directed, well-developed lingual papillae are particularly suited for this form of grooming.

Oral grooming most often occurs after periods of rest or sleep.18 It also occurs after eating, when a cat spends considerable time grooming by licking, particularly around the oral area. Direct licking is useful from the caudal to the midcervical area of the body (Figure 10-1). To reach various areas, the cat can assume some very unusual positions (Figure 10-2). The anogenital area is groomed after mating and during normal grooming periods. Oral grooming will involve multiple body areas 91% of the time and typically progresses from cranial toward caudal.18 If a cat is prohibited from grooming for 72 hours, a 67% increase in oral grooming will be seen during the next 12 hours.18 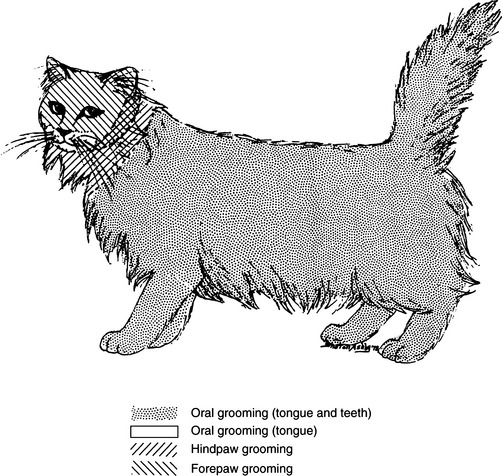 Figure 10-1 Areas groomed in various manners by the cat. 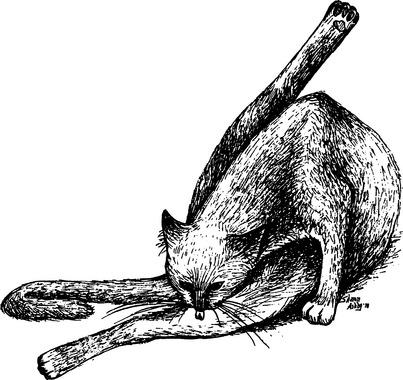 Figure 10-2 Cats can assume some unusual positions during grooming sessions.

The incisors are useful for pulling burrs and tangles out of the hair coat and are often used to clean between the toes. As would be expected, this type of grooming is most effective for the body caudal to the neck (see Figure 10-1).

It has been suggested that feline oral grooming, particularly through licking, could be a useful tool in evaluating the environment.34 The cat’s metabolic concentrations of pollutants gathered by grooming serve as sentinels of public health.

Areas that cannot be groomed directly by the mouth are cared for using either forepaws or hindpaws (see Figure 10-1). Because the head and neck are so difficult to care for, problems are more numerous in these areas.22 The common form of grooming that follows eating, which is second only to licking, is use of the forepaw as a washing tool. The paw is licked several times (Figure 10-3), and then its medial side is wiped across the neck, the back of the head and ears, and finally the face (Figure 10-4). Often the head and neck are moved to accommodate this action. After every few swipes the cat again licks its paw. The young kitten usually begins this forepaw-washing behavior before it is 4 weeks of age. 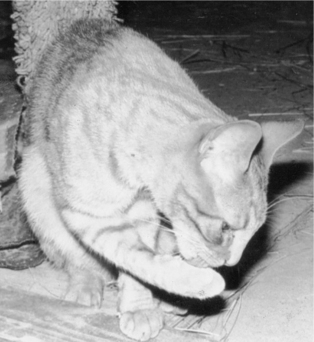 Figure 10-3 The licking of the forepaw before using it as a washing tool. 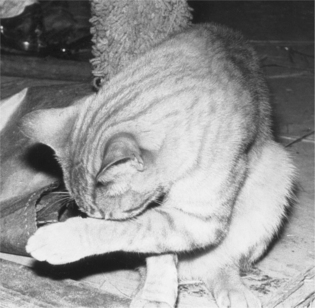 Figure 10-4 The forepaw is used to groom facial areas.

Scratching various parts of the body with a hindpaw begins about 18 days after birth (see Appendix D). As in paw washing, the areas most often scratched are those that cannot be licked, particularly the neck and auricular areas (see Figure 10-1). Scratch grooming is usually directed toward single regions and usually occupies only about 2% of the amount of time devoted to oral grooming.18 If prevented from scratching itself for several days, a cat will show an increase of 200% in the amount of scratching during the first 12 hours it is permitted.18

The cat conditions its claws by scratching favorite objects, usually near its sleeping quarters, or by chewing off the frayed and worn parts (see Figure 3-16). Scratching usually grooms the thoracic claws, and claws on the pelvic limbs are primarily cared for by the teeth.

Ancestors of the cat were not particularly social animals, so they did not have well-defined social behavior patterns. When two cats are together by mutual agreement, it is common for one to lick or rub against the other. Allogrooming involves one cat licking another. This type of mutual, or social, grooming usually involves the head and neck, the most difficult places for which to care (Figure 10-5). Females will groom other females and males, whereas males will groom only females.3 Cats, including queens grooming their kittens, have been known to chew off another’s tactile hairs during a mutual grooming session.10,19 Beginning at a few weeks of age, social behavior tends to reach a peak when the kitten is between 5 weeks and 4 months.55 After that time, the frequency of the mutual grooming sessions decreases. 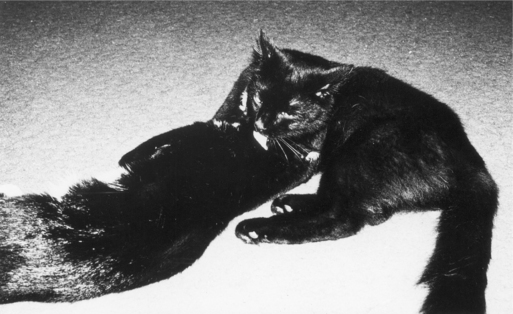 Figure 10-5 Mutual grooming of one cat by another.

Allorubbing usually involves one cat rubbing its head against the head or body of another cat, although the entire body could be used, not just the head. Female cats will allorub males more than males show the behavior to females.3 Females will also rub males more often than other females, to the point that in homes with only female cats, allorubbing is rarely to never observed.3 It has also been noted that an individual cat may rub another disproportionately more or less than is expected at random.12 It is theorized that mutual rubbing facilitates the regular exchange of body odors. This will familiarize cats with each other and gradually result in a group odor.12

Mutual grooming can be extended to humans by licking them and accepting their petting. Most cats patiently accept a prolonged session of caressing, probably because they have no built-in mechanism to limit it.20 In nature, one cat spends only a limited amount of time grooming another cat, and the receiver becomes almost immobile. Humans often extend this grooming session well beyond the normal length of time, and the cat usually accommodates them by not moving.

When a cat is in a conflict or stressful situation, it may appear ready to react but instead suddenly stops and performs an act that is out of context with the situation at hand, such as licking a paw and rubbing it across its face. Those are displacement activities. Presumably, this behavior reduces anxiety. A queen with kittens may increase her grooming of the young or of her own perineal and mammary regions during stress. If reprimanded for some behavior, a cat will often react by walking a distance away, then grooming. Cats that roll over and accidentally slide off a table or chair also respond with a grooming session, usually after glancing around the room.

Central controls of grooming behavior are not completely understood but are related to the pontine area of the brain and may be the same as for locomotion.14 When lesions are created in this location, a dissociation develops between the appetitive and consummatory phases of grooming.37,47 This abnormality is exhibited as an immediate response to a tactile stimulus that is independent of the appetitive component. Thus although the response is appropriate, the orientation may be poorly directed. For example, touching the ear might produce midair scratching movements.35,51 Similar abortive grooming has been observed with frontal neocortical lesions.26,47–49 In both cases, tryptophan hydroxylase levels of the rostral colliculi decrease, indicating a relationship between this area of the mesencephalon and grooming behavior.48,49

Serotonin is the neurotransmitter currently receiving the most attention because it can be affected by several popular drugs. Serotonin has not been linked to normal grooming behavior.25 It has been shown, however, that a cat’s chewing or licking behavior can activate serotonin.25

Thyroid hormones and glucocorticoids play a role in central control of grooming behavior, although the exact mechanism is uncertain. Thyroidectomized cats show the reduced tryptophan levels in the rostral colliculi, but the relationship between these two situations is not understood.51

Hallucinogenic drugs can produce dissociated grooming. The body is positioned properly, but licking, biting, or scratching either does not occur or is poorly directed.24

Circadian rhythms are difficult to identify, but studies of fragmented grooming behaviors have provided evidence that such cycles exist in the cat. Body temperature, caloric intake, and abnormal grooming activity fluctuate in 3- to 4-month periods, peaking in October or November and in June, and ebbing between February and May and in August.36,38,47,49–51