Evaluation and Management of High-Risk Pregnancy in the Mare

A high-risk pregnancy is one in which a condition or multiple conditions exists that are potentially serious or life threatening to either the mare or foal.1 Those conditions may be the culmination of physical, infectious, endocrinologic, or behavioral abnormalities. Maternal conditions are generally more easily recognized and assessed than fetal abnormalities1 and may either be limited to the genital tract or involve any other body system such as the gastrointestinal tract or musculoskeletal system. Not only is fetal well-being generally difficult to evaluate but potentially helpful intervention is limited.

The majority of high-risk pregnancy cases are presented because the owner observed a vaginal discharge, noted premature mammary gland development and lactation, or suspects twin pregnancy, or because there is a serious medical or surgical condition in a pregnant mare. Mares with larger than normal abdominal size or overdue pregnancies should also be considered high-risk pregnancies. Mares in which fescue toxicosis is known or suspected are frequently presented for lack of mammary development in late gestation or for prolonged gestation. In other situations there may not be any clinical signs to indicate a mare is experiencing high-risk pregnancy other than historical information from previous pregnancies or parturitions.

In nearly all cases, the primary objective of managing a high-risk pregnancy should be to allow the foal to develop in the uterine environment as long as possible. This objective may be accomplished by: providing antimicrobial therapy when indicated, promoting uterine quiescence, countering the adverse effects of endotoxin, and maintaining adequate fetal gas exchange and nutrition. In mares with an underlying medical or surgical condition, the ideal objective of intervention should be to correct the condition in order that the mare will be able to carry the pregnancy to term. Therefore, the clinician’s goal is to maintain the intrauterine environment in a state as close to normal physiologic health as possible. Extrauterine survival of premature foals is unlikely because the final stages of fetal maturation necessary for extrauterine life occur within the last 5 days of in utero development.2 Even an abnormal uterine environment is often more conducive to maintaining the life of the foal than neonatal intensive care. Premature delivery is indicated only in situations in which extrauterine survival is more likely than continued survival in utero. Exogenous corticosteroids are not effective for induction of fetal maturity owing to their inability to cross the placenta. However, foals that are chronically stressed in utero have the ability to respond by maturing precociously and may be delivered after a relatively short gestation but thrive and develop normally after birth.

Clinicians presented with sick, pregnant mares must determine if the fetus is affected, how severely it is affected, and the stage of fetal physiologic maturity.3 Clinical procedures for determination of fetal condition and maturity include palpation per rectum, transrectal and transabdominal ultrasonography of the fetus and placenta, examination of the vagina via speculum, serial blood sampling for hormone assay, amnio-/allantocentesis, fetal electrocardiography, and measurement of mammary secretion electrolytes. Guidelines for an equine biophysical profile based on fetal ultrasonography are available. A low score is a definite indication of an impending negative outcome; however, a high score does not assure a positive outcome.4

Palpation per rectum may be used initially to determine fetal viability. A foal with spontaneous movement can be considered alive, but one must bear in mind that stressed foals may demonstrate frequent bouts of hyperactivity and normal foals have periods of intermittent quiescence. Therefore, an unresponsive foal should not be immediately declared nonviable but must be assessed further by repeated examination per rectum or by ancillary procedures described in the paragraphs that follow.

Transabdominal ultrasonography is useful for evaluating fetal position, size, heart rate and rhythm, aortic size, fetal breathing movements, fetal fluid depths and echogenicity, uteroplacental thickness, and fetal move ment. Because of the large variation in normal fetal heart rates, fetal heart rate monitoring is not a particularly sensitive method to determine well-being. Fetal heartbeat is easily evaluated by transabdominal ultrasonography and can be monitored continuously via a Doppler heart rate monitor,5 but fetal electrocardiography is widely available and is more suitable for long-term monitoring. An electrocardiographic (ECG) lead is placed just in front of the mare’s udder and another lead is placed on her back in the lumbar area. The fetal tracing is recognized superimposed on the maternal tracing by its rapid rate and low amplitude. In normal equine pregnancies, fetal heart rate decreases progressively with advancing gestation and has a regular rhythm. Prior to day 160 of gestation fetal heart rate exceeds 120 beats per minute but gradually decreases to 60 to 80 beats per minute just prior to parturition. Periodic accelerations are generally associated with fetal activity and suggest fetal health.6 The frequency of cardiac accelerations associated with fetal activity increases with gestational age.6 Normal fetal movement can usually be detected a minimum of every 5 minutes. It is normal for heart rate to increase to up to 110 beats per minute for short periods of time in association with fetal activity during late gestation, but persistent tachycardia is pathologic and associated with maternal fever or dehydration, fetal hypoxia, or fetal/placental infection.6 Bradycardia is an indication of fetal asphyxia. Fetal bradycardia may be present as an adaptive heart rate pattern suggesting either cardiovascular efficiency or early stage hypoxia.6 The fetus adapting to hypoxic stress will have a slow heart rate and appear inactive with no fetal breathing and few spontaneous movements and cardiac accelerations. If the foal fails to adapt, tachycardia develops in attempt to maintain perfusion and there is no concomitant increase in fetal movement. Finally, with progressive disease, as the myocardium becomes affected, terminal bradycardia may be observed.6 The disappearance of beat-to-beat variation is an ominous sign. The clinician should be aware that maternal medications, such as detomidine or butorphanol, transiently reduce fetal heart rate variability.

Placentitis, the cause of nearly one third of all equine abortions, is associated with an increase in uteroplacental thickness (Fig. 26-1). Mares with placentitis rarely show signs of systemic illness. Ultrasonographic evaluation per rectum is the established method for measuring uteroplacental thickness. Measurement is made just cranial to the cervix on the ventral wall of the uterus. In normal pregnancies, the combined thickness of the uterus and placenta (CUT) does not change between 4 and 8 months of gestation, but increases significantly each month between 10 and 12 months of gestation.7 A CUT greater than 1.5 cm at any time (normal is 1.0– 1.2 cm at term) is direct evidence of placental or uterine edema and is usually due to placentitis. Separation of the allantochorion from the uterus with accumulation of hyperechoic (purulent) exudate is another indication of placentitis (Fig. 26-2). Large or progressively enlarging areas of placental detachment are abnormal and contribute to fetal compromise and eventual death.8 Increased echogenicity of either amniotic or allantoic fluid can also be regarded as an indication of placental disease. 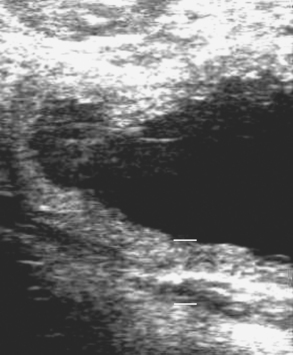 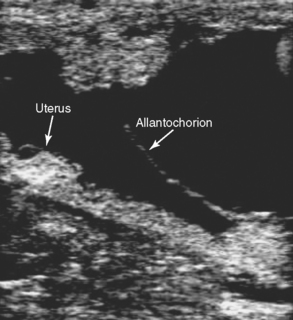 Visual examination of the vagina and cervix is readily accomplished through a sterile cylindrical speculum. It should be performed in all mares with a vaginal discharge and in mares with premature mammary development and lactation. Cases of suspected placentitis should also be examined vaginoscopically. A careful examination provides information on the presence and character of uterine discharges as well as the competency and integrity of the cervix. Culture specimens of discharges or placenta, which may be seen bulging through a partially dilated cervix, are readily obtained at the time of examination.

Serum hormone analysis can provide useful diagnostic and prognostic information. After about 90 days of gestation, maintenance of pregnancy is dependent on steroid hormones produced by the fetoplacental unit. The endocrine patterns in periparturient mares are characterized by increasing concentrations of progestagens and decreasing estrogens. These hormones are produced from precursors of fetal origin, metabolized by the fetoplacental unit or endometrium, and act primarily locally on the uterus. The mare is unusual in showing an increase rather than a decrease in circulating progestagens before delivery. Maternal serum or plasma concentrations of a number of progestagens, including 5α-dihydroprogesterone, escalate gradually in the last 3 to 6 weeks of gestation and peak 24 to 48 hours prior to parturition9 (Fig. 26-3). This pattern is evidence of fetal maturity and readiness for birth because the source of the prepartum rise in progestagens is fetal adrenal steroidogenesis. Progesterone is often undetectable (<1 ng/ml) in plasma of late gestation pregnant mares but metabolites of progesterone (progestagens) are present in high concentrations.10 Whether maternal serum progesterone concentrations are high or low in normal mares depends on the specificity of the testing procedure. Many test kits for progesterone cross-react with metabolites of progesterone such as 5α-dihydroprogesterone making interpretation of laboratory testing in high-risk mares difficult unless one is aware of the specificity of the testing procedure. The maternal endometrium metabolizes progesterone and pregnenolone to 5α-dihydroprogesterone.11 A rise in maternal plasma progesterone concentration, when the foal is at least 290 days of gestational age, has been associated with birth of premature but viable foals. This scenario is most likely to occur in cases of slowly developing placentitis or partial premature placental separation, which stresses the foal but provides ample time for the foal to respond to the stress and mature precociously to the point at which extrauterine survival is possible. Induction of precocious maturity takes approximately 3 weeks. Abnormal trends in maternal plasma progesterone are associated with fetal compromise. Increased concentrations of plasma progesterone during mid- and late gestation are suggestive of placentitis; however, therapeutic decisions should not be made on the basis of a single sample, and serial determinations are required to detect a clinically useful trend.12 Maternal plasma progesterone concentration determinations should be made at 48-hour intervals for a minimum of three sampling periods. Rising and elevated progesterone concentrations are associated with a good prognosis for fetal viability in late gestation. Consumption of endophyte-infected tall fescue grass may prevent the dramatic rise in progestagens prepartum.13 A rapid and sustained decline of progesterone concentrations to less than 2 ng/ml for more than 3 to 4 days is associated with impending abortion. An investigation of hormonal profiles of pregnant mares treated either medically or surgically for colic revealed that progesterone concentrations in mares that subsequently aborted either dropped rapidly or were low at the time of admission and decreased to below 2 ng/ml.14 If progestagens drop rapidly, owing to infection with equine herpes virus,15 mares invariably abort. 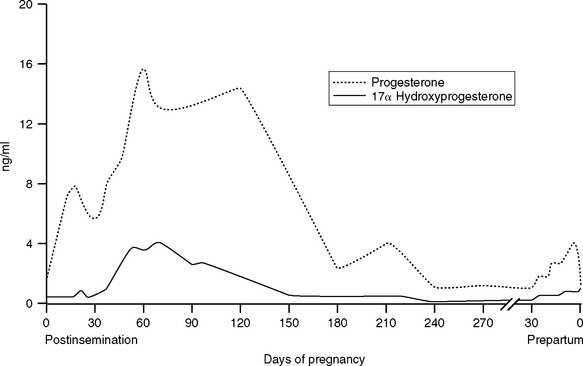 Fig. 26-3 Concentrations of progesterone and 17-hydroxyprogesterone during pregnancy in mares. Note the gradual rise in progestin concentrations during the last month of gestation, culminating in a sharp peak just before parturition. This rise is associated with maturation of the fetal adrenal glands and readiness for birth.