The concerns that have been raised regarding thoracoscopy in horses relate primarily to the need to establish a pneumothorax in order to complete the procedure. By definition, pneumothorax indicates the presence of “free” air within the pleural space and is defined as “iatrogenic pneumothorax” when implemented during surgery.

Horses with normal cardiopulmonary function and horses with lower airway inflammation have been shown to tolerate the procedure well (Peroni et al. 2000). Horses with pleuritis, chronic pneumonia, and chest trauma may necessitate careful preoperative assessment and the implementation of intraoperative measures that will lessen any possible detrimental effects of a surgically induced pneumothorax. Traumatic pneumothorax, in particular, is usually secondary to a penetrating chest injury; however, nonpenetrating blunt trauma may also cause pneumothorax by compressing and rupturing alveolar groups, causing air to leak from the lower respiratory tree into the pleural space. It is this author’s experience that horses with acute chest trauma are those most susceptible to intraoperative complications and should therefore be carefully selected and managed as surgical candidates.

During spontaneous breathing and in normal conditions, Ppl is negative with respect to alveolar pressure and atmospheric pressure. Normal end-expiratory Ppl is approximately −5 cm H2O. The Ppl becomes more negative (−7.5 cm H2O) during inspiration when the chest wall is expanded through the effort of the inspiratory muscles (mainly diaphragm and external intercostal muscles). Maintenance of a negative Ppl is best understood by considering the relationship between chest wall and lung. A negative Ppl is maintained throughout the respiratory cycle because of the tendency of the lung to collapse and of the chest wall to expand. The tendency of the chest wall to expand is counteracted by the normally negative Ppl drawing the chest wall inward. When a pneumothorax occurs, the relationship between chest wall and lung is interrupted and the chest wall, controlled only by recoil forces, tends to expand. The lung, under the influence of its own elastic properties, collapses. When pleural and atmospheric pressures are in equilibrium, the lung reaches its minimal volume, and further increases in Ppl lead to ipsilateral chest wall expansion and mediastinal displacement toward the contralateral hemithorax (Preziosi 1963; Pentti 1967; Wilkinson 1969; Maranhao et al. 2000).

Lung collapse affects pulmonary function. The presence of air in the Ppl further uncouples the chest wall from the lung. As Ppl increases, transpulmonary pressure (recoil pressure) decreases. The recoil pressure across the chest wall is also changed so that the thorax expands as the lung collapses. With large pneumothoraces, a mediastinal shift can be detected, on radiographic examination, toward the contralateral hemithorax. In humans, total lung capacity (amount of air contained in the lung at the end of maximal inspiration) has been shown to decrease with lung collapse, and this will decrease vital capacity (Prys-Roberts 1973; Hajek 1980; Rivas de Andres et al. 2008). In addition, a decrease in arterial oxygen tension has also been found following spontaneous pneumothorax in people (Bitto et al. 1985; Hurewitz et al. 1986). The decrease in arterial oxygen has been attributed to a low ventilation/perfusion ratio in certain areas of the lung. Airway closure has been demonstrated to occur at low lung volumes in patients with pneumothorax (Anthonisen 1977).

Cardiac output can be negatively affected by pressure changes occurring within the chest cavity. Normally, an external pressure of −5 mmHg surrounds the cardiac muscle. If the chest is opened to the atmosphere, the pressure around the heart will increase to 0 mmHg. In order for cardiac output to remain unchanged, right atrial pressure is going to increase proportionally to the increase in Ppl. A sustained increase in right atrial pressure, such as in pneumothorax conditions, can lead to a pressure increase in the systemic circulation and can decrease venous return of blood to the heart, negatively affecting cardiac output (Chierichetti & Fauda 1954; Bennett et al. 1989; Trca et al. 2010).

Sedatives, Anesthetics, and Analgesia in Thoracoscopy

Thoracoscopy is most commonly performed with horses standing in order to eliminate the risks associated with general anesthesia and because the thoracic anatomy can be effectively viewed in the awake horse (Peroni et al. 2001). In people and in small animals, single lung ventilation facilitates anesthesia, allowing the unoperated hemithorax to be ventilated in isolation from the operated hemithorax, thus improving ventilation/perfusion ratios (Campos & Massa 1998; Cohen 1999; Vassiliades 2002; Lansdowne et al. 2005). Single lung ventilation has not been well tested in horses, and as a result, lung collapse and pneumothorax offer significant challenges to both the surgeon and the anesthetist and should be carefully considered during the preoperative period.

Analgesia is provided by infusing the endoscopic and instrument portals with local anesthetics. This technique is adequate and does not appear to be inferior to specifically anesthetizing the intercostal nerves associated with the entry points into the thorax.

Systemic analgesia and sedation is achieved by intravenously administering either xylazine (0.2–1.1 mg/kg) or detomidine (10 µg/kg) combined with butorphanol (0.01/0.1 mg/kg) if necessary (neuroleptoanalgesia). Detomidine is favored over xylazine for thoracoscopy for its longer-lasting effects, for the profound sedative-analgesic effect, and because it can be prepared and administered as an intravenous infusion for the duration of the procedure. A typical protocol would include initial administration of a bolus loading dose of 6 µg/kg. Subsequently, 24 µg/kg of detomidine is added to a 250 mL bag of 0.9% saline equipped with a 15 drop/mL drip set. An infusion rate of 0.6 mg/kg/min is started, which is then halved every 15 minutes or titrated based on surgical stimulus (Daunt et al. 1993).

Important measures that can be taken to ensure the safe completion of thoracoscopy in the standing horse include the intraoperative administration of 100% oxygen via nasal insufflation and the careful regulation of the degree of lung collapse and pneumothorax during surgery. Unfortunately, there are no studies documenting the specific nasal oxygen flow rates needed in adult horses undergoing thoracic surgery; however, it is known that horses recovering from anesthesia require flow rates of at least 15 L/min to improve PaO2 (Hubble 1991). Additionally, the surgeon can minimize cardiorespiratory impairment by carefully using the suction device to maintain lung collapse only to the degree needed to safely complete the procedure. It is also important to evacuate as much of the air as possible from the thorax upon completion of thoracoscopy, thus avoiding a residual pneumothorax in the postoperative period.

Unless antibiotics are being used to treat an underlying pulmonary or pleural infection, horses undergoing elective thoracoscopy will need a broad-spectrum antibiotic combination only in the immediate perioperative period and depending on the surgeon’s preference. Antibiotics are not necessary in horses requiring biopsy of diaphragmatic masses or mediastinal lymph nodes but may be indicated when lung biopsy is performed or in any case in which chest trauma is suspect or confirmed. In addition, flunixin meglumine (1.1 mg/kg, IV b.i.d.) should be administered preoperatively and for a few days after surgery to decrease pleural inflammation and to provide systemic analgesia.

Horses are restrained in stocks and sedated using a continuous IV drip infusion of detomidine. Either or both the right and left thoracic chest walls are clipped and aseptically prepared for surgery. The 13th intercostal space is commonly used as the access point to the chest, serving as the site for endoscopic portal placement. Analgesia is provided by placing 5 mL of 2% carbocaine in the skin and deep subcutaneous tissues in the proximal portion of the intercostal space just ventral to the line of the epaxial musculature primarily formed by the longissimus dorsi muscle. A stab incision is made through the skin and a pneumothorax is induced by inserting a teat cannula into the thoracic cavity through the incision and intercostal musculature. Air can be readily heard rushing into the chest as atmospheric pressure and Ppl equilibrate. The teat cannula is removed and a trocar/cannula system is placed, taking care not to damage the lung. The cannula is replaced by the telescope and the exploratory thoracoscopy can begin.

The equine thoracic anatomy viewed thoracoscopically has been described in detail (Vachon & Fischer 1998; Peroni et al. 2001). Briefly, the partially collapsed lung within the rib cage, the aorta, the esophagus, and the diaphragm can be easily distinguished in either hemithorax. Unique to the right hemithorax are the azygos vein, the thoracic duct, and the pulmonary veins. Mediastinal lymph nodes and vagosympathetic innervation are visible primarily in the left hemithorax just dorsal to the esophagus and below the aorta. The surface of the lung can be palpated using a blunt-end endoscopic probe or the closed end of a endoscopic Babcock forceps. The caudal edge of the lung can also be elevated with a similar atraumatic forceps to reveal a greater portion of the cupula of the diaphragm. The exploratory thoracoscopy can be completed in its entirety via a portal placed through the 12th or 13th intercostal spaces. More cranially placed portals will not significantly improve the view of the above-mentioned structures but may aid in observing the most ventral aspects of the pleural cavity, which may be needed to guide intrapleural drain placement. As an example, surgery performed via a more cranial approach, such as the eighth intercostal space, will be hindered by the rigidity of the eighth and ninth rib, which disallow easy cranial and caudal movements of the telescope (Peroni et al. 2001).

Through the dorsal mediastinum, the surgeon will commonly be able to observe the contralateral lung (Figure 22.2), which, on most occasions, will remain fully inflated despite a pneumothorax being induced in the operated hemithorax.

Figure 22.2 Left hemithorax thoracoscopy. The contralateral lung is visible through the dorsal mediastinum (series of arrows) below the aorta and above the partially collapsed lung. 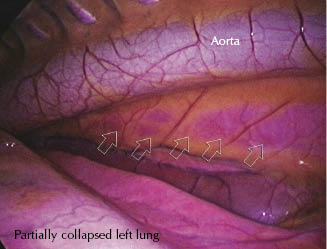 The identification of pulmonary, pleural, and mediastinal disease necessitating biopsy is greatly enhanced by an unobstructed and direct view of the intrapleural anatomy and related pathology. Thoracoscopy also presents the clinician with the option of obtaining samples from multiple tissues during the same procedure. Tissues that have been sampled from the thorax include lung and mediastinal lymph nodes, in addition to a variety of neoplastic masses such as squamous cell carcinoma, hemangiosarcoma, and lymphoma. When performing a pulmonary biopsy, the surgeon will have to be aware of the appropriate triangulation techniques common to most endoscopic procedures. To achieve triangulation and to perform a biopsy safely, two instrument portals will be needed in addition to the endoscopic portal. Most often, one portal is created, one or two intercostal spaces cranial and about 15 cm ventral to the endoscopic portal, and a second instrument portal is located further caudally and ventrally. With this technique and with the aid of endoscopic staplers (45-mm endoscopic linear cutter), wedge biopsies have been successfully obtained from the caudal edge of the lung in normal and heaves-affected horses (Lugo et al. 2002). Accurately stapling the lung is vital when obtaining a biopsy so that an airtight seal is achieved along the line of bronchiolar transection. Lung biopsy has also efficiently been accomplished using laparoscopic pre-tied ligating loops in horses with normal and impaired lung function (Relave et al. 2008). With this technique, it is recommended that surgeons have access to alternative instrumentation to ensure appropriate sealing of the biopsy site and that horses be treated with intranasal oxygen. Furthermore, a commercially available vessel-sealing device (LigaSure) has also been used successfully to accomplish thoracoscopic-assisted lung biopsy in normal and heaves-affected horses (Figure 22.3). With either technique, the importance of sealing the cut edge of the lung cannot be overemphasized since the development of tension pneumothorax can be a potentially life-threatening complication (Relave et al. 2008, 2010). 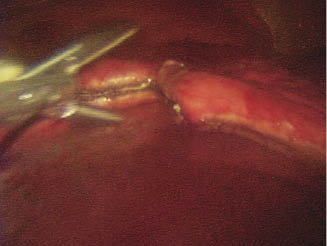