Liver and splenic biopsies are performed in a similar manner. Horses do not respond to biopsies of these organs, negating the need for local anesthesia. The dorsal aspect of the spleen is accessed on the left side of the abdomen, and the caudal lobe of the liver is most easily accessed from the right side of the abdomen. The area of interest (dorsal spleen or caudal liver) is identified by direct observation, and the biopsy forceps are advanced and one or multiple biopsies are taken. The liver can be challenging to biopsy in a horse with a wide pelvis as getting the appropriate angle with the rigid biopsy forceps can be challenging. While bleeding does occur at the biopsy site, it is rarely a problem. Applying pressure at the biopsy site with the biopsy forceps will generally provide hemostasis. Endoscopic electrosurgical devices can also be used for hemostasis. Gel foam can be applied to the site. Sutures are rarely beneficial as they usually pull through the capsule.

Renal biopsies require incising the peritoneum over the kidney. Each kidney is approached from the ipsilateral side. Local anesthetics (10–20 mL 2% lidocaine or carbocaine) should be injected into the peritoneum at the proposed site of the incision. A laparoscopic scissors is introduced into the abdomen, and the peritoneum over the area of interest is incised. It is not always possible to access the areas of interest for renal biopsy. The peritoneum is bluntly dissected from the kidney with either the end of the scissors, an atraumatic biopsy forceps, or the biopsy forceps. One or multiple biopsies are taken. Similar to the liver and kidney, hemorrhage is not generally a problem. The peritoneum is not sutured.

Bowel biopsy can be performed using various techniques, either extracorporeal or intracorporeal. If performed using the intracorporeal technique, it can be done open, using scissors and needle holders/endoscopic suturing devices, or closed, using an endoscopic linear stapler. Extracorporeal biopsies are performed by placing the portals as previously described, identifying the bowel of interest, and grasping the bowel with an atraumatic grasping forceps. They can also be done by passing a long suture through the bowel wall, bringing the bowel up to the body wall, increasing the incision, and exteriorizing the bowel. Using this technique, there is no contamination of the peritoneal space, but the body wall incision must be enlarged. The bowel must also be movable enough to exteriorize. A standard approach is used to remove a section of bowel and to close the remaining bowel. Care must always be taken to not reduce the lumen of the bowel when closing.

Open, intracorporeal, endoscopic bowel biopsy is performed completely within the abdomen (Schambourg & Marcoux 2006; Bracamonte et al. 2008). The bowel segment of interest is identified using atraumatic grasping forceps. The small intestine, cecum, and right colon are generally best evaluated from the right flank; the left colon from the left flank; and the descending colon from either flank. The large colon and cecum are difficult to manipulate endoscopically, limiting the ability to identify specific locations within the bowel for biopsy. When the area of interest is identified, the bowel is stabilized with atraumatic grasping forceps. The biopsy area is incised using endoscopic scissors, and the open bowel is closed using needle holders or an endoscopic suturing device, such as the Endo Stitch (Figure 8.3) (Schambourg & Marcoux 2006). Care must be taken to limit contamination. A suction lavage device can be very helpful in these cases to limit contamination spread. Open, intracorporeal, endoscopic bowel biopsy provides the surgeon with a minimally invasive technique to obtain biopsies, but there is an increased possibility of peritoneal contamination.

Closed, intracorporeal, endoscopic bowel biopsy is similarly performed completely within the abdomen (Bracamonte et al. 2008). Similar to open, intracorporeal, endoscopic bowel biopsy, the bowel is identified and stabilized with atraumatic grasping forceps. The area of interest is incorporated into an endoscopic linear stapler that is advanced through a cannula into the peritoneal space and placed into the desired section of bowel (Figure 8.2). The stapler is fired, placing staples in both sides of the stapling device, keeping the bowel lumens closed, and limiting contamination. Closed biopsy techniques allow for a minimally invasive approach, but require a larger cannula, and are more expensive owing to the cost of the stapling device and cannula.

The portal sites are infiltrated with 15–20 mL 2% carbocaine (Figure 8.4). In general, three portals can be created in each flank, with an additional portal possible in the 17th intercostal space (Figure 8.4). An 11-mm incision is made at portal 2 through the skin and external abdominal oblique fascia. An 11-mm-diameter, 15- to 20-cm-long cannula with a blunt obturator (Figure 8.5) is placed perpendicular to the skin and inserted through the incision, flank muscles, and peritoneum in one slow but continuous motion. 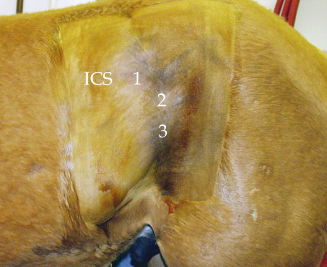