Antlers are only indirectly involved in the outcome of the reproductive process, but they are so intimately involved with, and affected by, the sexual seasonality of cervids that it becomes essential to discuss them and the effects that sex hormones have on their growth and annual cycle.

Antlers are unique in the animal world and therefore the jargon used in antler discussions is also unique.

The term “velvet” refers to the skin covering a growing antler. It describes the fuzzy texture provided by many fine hairs growing on the surface. “Velvet antler” refers to the entire antler when it is in the growth phase. At this stage it is soft and lacks the mineralized characteristics of hard antler, which is nothing less than bone. Frequently “velvet” and “velvet antler” are used interchangeably to refer to the antler in its growth phase.

Antler grows from discrete areas on the frontalg bone of the skull called pedicles. They are permanent features of the skull and remain after the antler is cast off in the fall as the perennial source of the regenerating antler.

The antler-pedicle junction is called the coronet, or the “burr,” due to the circumferential growth of irregular knobs and pearls of antler at the junction. In first-growth antlers the coronet is less prominent, becoming more distinct with advancing maturity.

“Spikers” are yearling stags with first-growth, single-spike antlers. Spike antlers are sometimes branched, depending on the month of birth and the nutrition available for growth. Early born stags on good levels of nutrition frequently grow branched antlers in the first year. The presence of such antlers is not necessarily predictive of future antler growth.

The generic antler is composed of a major beam, with branches or tines arising from the beam. The number, configuration, and spatial orientation of tines is species-specific.

Antlers are often unknowingly referred to as horns. Antlers are quite distinctfrom horns and have several features that distinguish them from horns, including their ability to regenerate. In fact, antler is the only mammalian tissue besides the place nta that is entirely shed and subsequently regenerated. The major differences between antlers and horns are listed in Table 133-1.

Most of the available information on antler growth and control deals with deer from temperate regions. The timing and regulatory mechanisms of antler cycles in tropical deer can be somewhat different than those found in temperate zones and are illustrated in Figure 133-1. However, the basic mechanisms of antlerogenesis and its regulation provided here are common to most cervids. 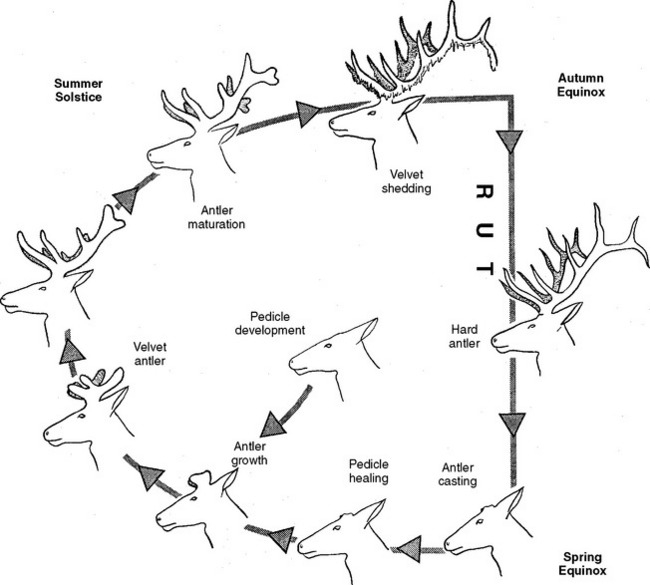 Antler pedicles develop from osteogenic centers on the frontal bone area. They begin growth when sexual differentiation of the fetus occurs. Testosterone is required for pedicle formation and growth. It does not directly stimulate growth, but increases the sensitivity of antlerogenic tissue to undetermined growth factors.1 Pedicle growth is sufficient to support antler growth at about 6 to 10 months of age and is a continuous process in the first antler cycle.2

Hummels are antlerless red deer stags. This abnormality has been attributed to poor feeding conditions resulting in the formation of incomplete pedicles without the potential to develop normal antlers. Presumably, nutritional cues act synergistically with androgens to permit the development of this secondary sex characteristic of red deer.2

At the distal pedicle, mesodermal cells derived from the skin or the pedicle, or both, multiply and differentiate to make new antler tissue. At the point of growth hyperplastic fibroblasts deposit collagen, forming a well-vascularized mass on the pedicle. The new antler elongates as this growth continues in the outermost layers of the tip. Further differentiation of cells into chondroblasts and chondrocytes associated with the formation of cartilage occurs in the portions closer to the antler base. Subsequently, the antler continues to enlarge by the differentiation process at the tip and by elaboration of fibrocartilage underneath those portions. Growth is very rapid; a wapiti antler is capable of growing more than 2 cm in a 24-hour period. After a period of about 80 days a mature wapiti stag can be expected to grow immature, still uncalcified antlers in excess of 15 kg. Subsequent growth is slowed as antler maturation proceeds and full growth is achieved after approximately 120 days. Readers requiring a more detailed description of basic antler development and growth are referred to the paper by Chapman.3

Primary ossification of antler occurs through the process of modified endochondral ossification whereby cartilage is directly converted to bony tissue by the deposition of mineralized material within the cartilaginous matrix.4 Chondrocytes exhibit alkaline phosphatase activity leading to the formation of trabeculae and spongy reticulum. The reticulum is then strengthened by osteoblastic activity laying down bone on the surfaces of the trabeculae (intramembranous ossification).4 This activity eventually leads to the hardening of the entire mature antler. The calcification and ossification process proceeds up the antler from the base to the tip. The thickening of the trabeculae eventually results in the typical hard antler, consisting of thick compact bone covering a sponge-like core.

Antler metabolism is largely under the control of hormones, such as insulin-like growth factor (IGF), but antler mineralization and ossification are influenced by testosterone.5 As photoperiod decreases the antler becomes more sensitive to the increasing presence of testosterone, resulting in completely mineralized and polished antlers at the time of rut.6 Figure 133-1 illustrates the circannual antler growth pattern in deer from temperate zones.

Coincidental to advancing antler calcification the skin covering the antler begins to die. The exact mechanism of velvet shedding is poorly understood, but there is no doubt that vascular changes initiate the process, with velvet death due to avascular necrosis. Typically velvet shedding occurs at the same time as testosterone levels are rising. Administration of exogenous testosterone (or estrogen) will cause premature shedding of antler velvet.6

The hardened and cleaned antler does not die but appears to remain alive like other bones in the body. In the fallow deer a well-developed system of microscopic nutrient canals is evident, and there are living osteocytes, osteoblasts, osteoid seams, and microcallus formations indicating bone remodeling activity present until at least 3 weeks before casting.7

The annual loss of the antler from the pedicle in late winter or early spring is called casting. Casting is associated with diminishing testosterone levels resultingfrom the increasing photoperiod of spring. The line of future separation between the antler and pedicle is called the abscission line and is indicated microscopically by a narrow transverse band of minute blood vessels. Osteoclastic activity across this line isresponsible for the eventual release of the antler from the pedicle. After casting the ingrowing skin-derived tissue fuses with the mesodermal tissue from the vascular channels of the pedicle, giving rise to a developing antler bud under the scab covering the pedicle.8